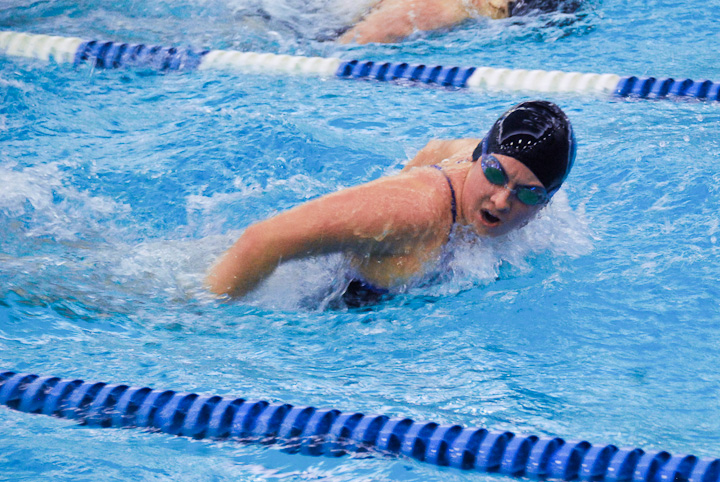 The Light Blue divers gave the Lions the extra points needed to win in a tight match up against Penn.

At Penn Friday, a tenacious Columbia women's swimming and diving squad pulled out a close win in a back-and-forth meet with the Quakers, 159-140. Head coach Diana Caskey said the coaches expected a close competition going in. "We said, 'If you watch certain events it'll look like they're killing us and if you watch others, it'll look like we're killing them,'" Caskey said. "We told them it would be close from start to finish." The Lions finished first and third in the meet's first event, a tight 200 medley relay, with the winners separated by less than a second. They also pulled ahead in key events, sweeping the 100 fly and 200 IM to gain a major points advantage. But Penn battled back, playing up its own strengths—particularly in freestyle—by taking the top three spots in the 500- and top two in the 50-, 100-, and 200-yard distances. A crucial performance came in the 1,000, where Columbia junior Aileen Smith broke up the Penn freestyle contingent to take first, followed by junior Maggie D'Arcy and freshman Daniela Rueda in the third and fourth spots. "You can't tell from the results, but she was behind most of the race and at the 800, she surged ahead and took the lead and provided the momentum going forward," Caskey said, praising Smith's "gumption and strength." Diving was also at the top of its game, delivering victories in both events. Senior Kristin Hehir and junior Katie Furr took first and second with 250.50 and 241.65, respectively, in the 1 meter, and switched positions in the 3 meter, where Furr took first. "The divers were outstanding," Caskey said. "They were instrumental in providing both the points and momentum." Smith wasn't the only swimmer to persevere, either. "Down at Nationals [last weekend], both Katie Meili and Mikaila Gaffey got a very bad stomach virus," Caskey said. "They couldn't swim most of this week, so it was in question whether they would even travel to Penn." At Penn, Gaffey was part of the third-place 200 medley relay team, and Meili was a triple winner in the 100 and 200 breast and the 200 medley relay—not to mention taking second behind teammate junior Laney Kluge in the 200 IM. Ivies are a constant focus for the team, but Caskey said that the close meet doesn't necessarily indicate a threat at the championships. "I think Penn is a better dual meet team than they are a conference team," she said, adding that Penn's depth isn't as strong as that of Harvard, Princeton, and Yale, who consistently hold the top of the league. While she was pleased with the victory alone, Caskey said she gave the team one extra motivator for this weekend's contest before it began. "I wanted a win against Penn for my birthday," Caskey said. "It was a lot of pressure." The Lions are off until the new year, when they'll face Bucknell on Jan. 5. sports@columbiaspectator.com