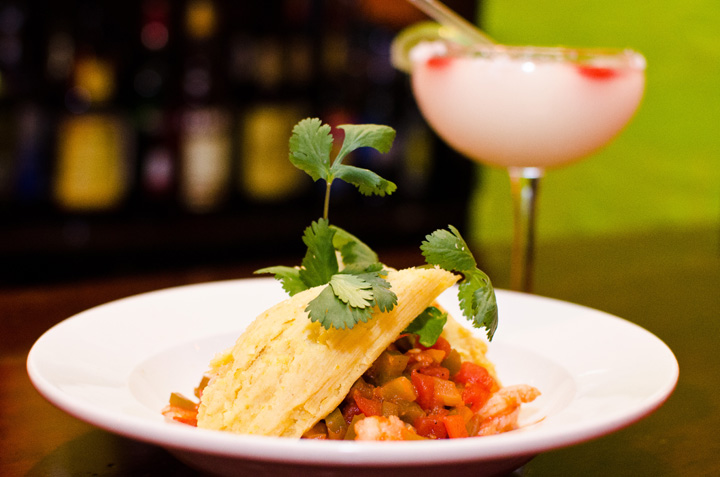 It was less than a week after news broke that Il Cibreo had closed its doors that I walked through those same doors to eat at Amigos. Having replaced the restaurant formerly known as Campo, the Mexican eatery went up in five days' time—a feat for even the shadiest burger joint, but especially notable for a restaurant whose food is so good and whose atmosphere is already so defined. The walls, which are covered in Southwestern-style paintings, signs, and tin work, did more to remind me of New Mexico than Old Mexico, but certainly gave the day-old restaurant an established feel. After only 24 hours, Amigos was already on top of its game—my waitress brought out chips and salsa almost immediately and touted the restaurant's impressive drink specials ($5 margaritas all day) before sharing that the guacamole was made to order, and wasn't to be missed. She was right—fresh and spicy (if you want it to be), the guacamole is a perfect companion to the restaurant's house chips and salsa. Since it was cold outside, I decided to order the posole soup, which is made with pork broth and came with avocado and fried tortilla strips in the center. While the avocado was an unnecessary addition to the soup and the pork was fattier than I'm used to, the rest of it was tasty. It wasn't my mom's posole, but I enjoyed it all the same. For my main course, I ordered the Baja Fish Tacos, knowing that the best measure of any Mexican restaurant is its tacos. I wasn't disappointed. They featured a hearty piece of fried tilapia topped with citrus slaw, a large sprig of cilantro, and a house-made chipotle sauce. All of this, wrapped in a fluffy corn tortilla and with a little fresh lime juice, hit the spot. With regard to cost, Amigos isn't the cheapest restaurant in Morningside Heights, but everything—except perhaps the soup—was well worth the price. The tacos were a little pricey, at $15 for fish and adobo short rib, $14 for pork carnitas, and $12 for vegetarian, but each order comes with three tacos plus beans and rice, so it's actually a reasonable value. The soups are priced fairly moderately at $6-7, but I'm not sure why the guacamole costs $9, even if it is pretty good. I've certainly had better guacamole that costs less. Even though it doesn't lend itself to the party atmosphere that Il Cibreo and Campo had, Amigos is a nice place to grab dinner or drinks with friends on a Thursday night, especially with its happy hour specials. Amigos is located at 2888 Broadway, between 112th and 113th streets. arts@columbiaspectator.com | @davidj_salazar