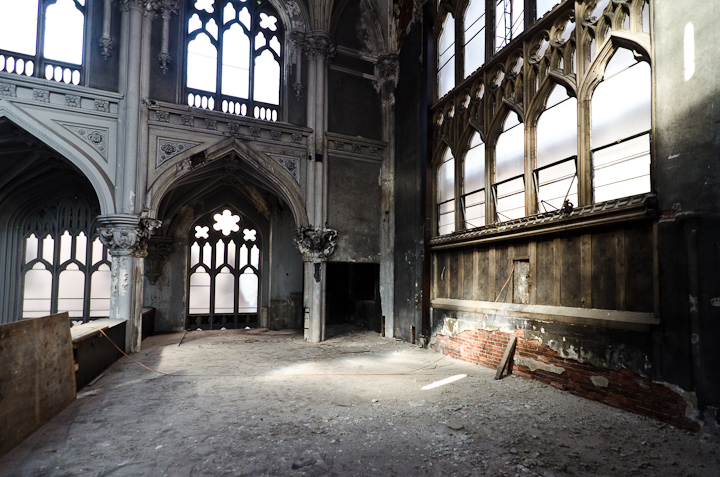 St. Thomas the Apostle Church on 118th Street, which has been shuttered for a decade, faces redevelopment.

It's easy for passersby to overlook St. Thomas the Apostle Church, on the corner of 118th Street and St. Nicholas Avenue, which, covered by scaffolding, looks like any other West Harlem construction site.

But community members and preservationists are still concerned that the 109-year-old structure, known for its unique architectural design, could be demolished or otherwise harmed in a redevelopment.

Parishioners no longer worship at the church, which closed 10 years ago due to lack of funding. Developer Artimus Construction bought the building from the Archdiocese of New York last year and has remained tight-lipped since.

"We don't have finalized plans of what we will be doing," Ken Haron, president of Artimus, said in an email.

City building records show that Artimus filed permits for restoring the façade and rebuilding the back wall in October of last year after it purchased the building from the archdiocese. The fact that the permits are so limited—and that the church has weathered preservation battles before—has given preservationists hope.

"I went to a meeting of Community Board 10 recently where the plans were discussed. The plans are still very rudimentary," Harlem historian Michael Adams said. "The people now in the community are trying to arrange through State Senator Bill Perkins' office and Congressman Rangel and the state preservation office to find alternatives to destroying the church."

Built in 1904, St. Thomas has been a very familiar structure along West 118th Street. In 2004, it became a focal point of a heated landmarks preservation debate when the Archdiocese closed the building's doors and proposed its demolition. After plans were announced to convert the space into senior housing, the community and various organizations campaigned for its preservation.

"In 2006 and 2007, we worked closely with Congressman Rangel's office and made a presentation to the archdiocese for alternative redevelopment of this site, but the archdiocese turned down the proposal," Ann Friedman, director of a group that helps save churches throughout New York state.

"There was community uproar and even protests in front of St. Patrick's Cathedral," recalled Julienne Jack, a longtime member of a group of parishioners that was involved in saving the church. "We enlisted everyone who had ever gone or had been involved with St. Thomas Church to help stop the archdiocese from destroying the church. They have already demolished many of the local churches under the archbishop."

Landmark status is a possibility, say preservationists—the structure is currently deemed eligible for the New York State Register of Historic Places. Community members tried unsuccessfully to ensure landmark status for the building in 2004.

"St. Thomas the Apostle Church was not designated as a landmark, but it was a matter of neighborhood involvement and advocacy," said Colleen Heemeyer, the manager of grants and technical services of the state register. "Now, it is eligible for the national register, not without its historical and architectural importance. We saw the potential in the building."

Because it is still not landmarked, Artimus was able to acquire the property.

"We had enlisted a developer, Ken Haron, and his company, Artimus Construction, and he has reformulated the original design that will remove any religious items or objects to make the building into a nonreligious edifice," Jack said. She said she had collaborated and met with Artimus about the plans, and the developer also presented revised planning models in recent meetings with Heemeyer.

"Our concern is to build it to be useful in some way," Heemeyer said. "It's important to be getting a use into the landmark that is, over time, sustainable."

Now, it appears that previous efforts are paying off and the unique qualities of the church may be preserved.

"The architect, Thomas Poole, did some really unusual things, and many of his buildings were out of the ordinary," said Andrew Dolkart, a professor at the Graduate School of Architecture, Planning and Preservation, said. "This church has a flamboyant, terra-cotta Gothic façade, which is quite singular, as well as its extensive use of Guastavino vaulting."

Adams called St. Thomas a special place. "The church is very beautiful and very grand," he said. "It was a conscious and deliberate effort on the part of the people who built it—the Irish people—as a symbol of their devotion to God and their success as citizens of America."

"I just think that it should be resurrected," Sheryl Marsh, an employee at a nearby bakery, said. "We also need more churches in the neighborhood. Now, we have more bars than churches."