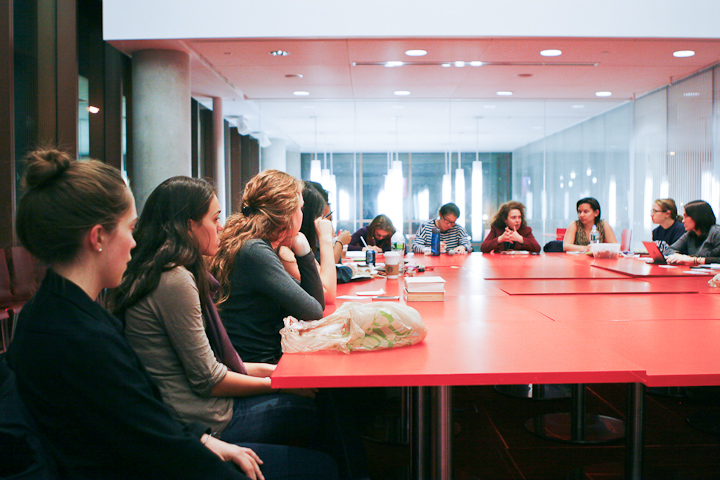 Barnard's Student Government Association meets last semester. Barnard recently codified its "Good Samaritan" policy, which until now, had not been written out explicitly.

Barnard recently joined the rest of Columbia University in codifying its so-called "Good Samaritan" policy, allowing students in violation of the school's drug or alcohol policy to seek medical aid without penalty.

In an email to students, Barnard College Dean Avis Hinkson and the Student Government Association executive board explained that, "Any student can seek assistance for herself or a fellow student without worrying about disciplinary action for possession of alcohol or use of alcohol or other substances."

The email, sent on Jan. 28, also explained that this policy—formally known as the Responsible Community Action policy—has been in practice for years, but never explicitly written out.

"It was something administrators were already following, but students wouldn't necessarily know about the policy if it's an unwritten rule," Julia Kennedy, BC '13 and vice president of SGA, said.

According to Blaine Harper, CC '13 and Columbia College Student Council's student services representative, Barnard's website previously stated that students would be punished for violating the college's drug or alcohol policy.

"The policy on the website was draconian, talking about severe punishment, bringing out the Office of Judicial Affairs," Harper, who lobbied SGA to adopt the policy, said.

Columbia instituted the policy last fall, but it was unclear if protection extended to Barnard students.

"Having both campuses acknowledge it in the same way would ensure that students would be protected no matter which school they're in, no matter what campus they're on, because we're all part of one community," Harper said.

The policies on Barnard's and Columbia's websites use identical language, but Barnard's includes a list of symptoms that would warrant medical aid.

"We don't want students to hesitate to help one another, and this policy raises awareness about recognizing dangerous reactions to alcohol or other substances and exactly what you should do when you or a friend is in need of help," Amy Zavadil, Barnard's Community Conduct Director and Title IX Coordinator, said in an email.

When Columbia instituted the policy last fall, SGA spoke briefly about extending it to protect Barnard students, but Kennedy said that "it was lost under other stuff happening at Barnard."

SGA did not discuss the policy again until this October, when Harper spoke at SGA's representative council meeting.

"We shouldn't wait for it to become a problem for students," Harper said in October.

At the meeting, Harper said that as a result of Columbia's policy, there have been increased calls to Columbia University Emergency Medical Services, which she said is a good thing.

"Seeing that difference after Columbia's campus put it in place means that we might see more calls here [at Barnard] and people would be getting help when they might not have been," Harper said.

Though students can rest assured they will not be penalized for seeking medical help when in violation of the University's drug or alcohol policy, they are required to meet with a member of the Office of Residential Life and Housing or Community Conduct and complete an Alcohol and Substance Awareness Program assessment.

The policy states that "serious or repeated incidents will prompt a higher degree of concern and progressive College response, and may include parental notification. Failure to complete recommended education, assessment and/or follow-up may result in disciplinary action."

"Students shouldn't think of it as a form of punishment per se," Kennedy said. "The reason why they have them meet with that group is so students can understand reasons behind their actions that led them to drinking and drugs. Barnard wants to care about its students."