Women's basketball shoots well from beyond the arc, but struggles within the paint

Women's basketball shoots well from beyond the arc, but struggles within the paint 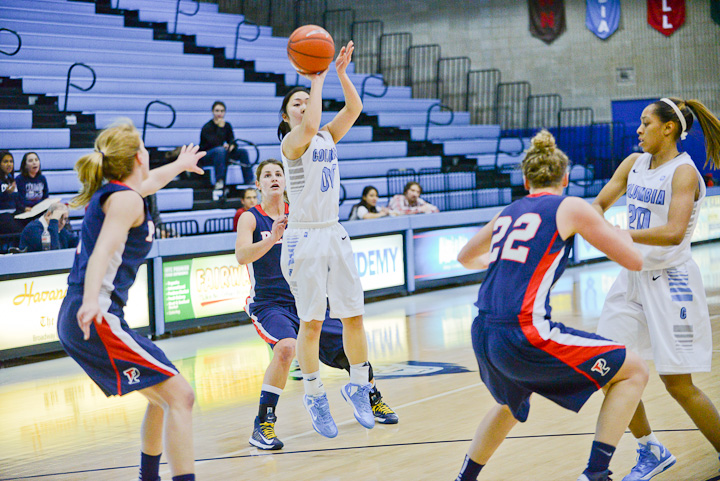 As the Lions struggle within the paint, Miwa Tachibana and others continue to shoot well from beyond the arc.

The women's basketball team (2-17, 0-5 Ivy) has put up some big numbers from beyond the arc in recent games, but it has struggled to capitalize on must-have scoring opportunities in the paint. In last weekend's matchup against Dartmouth, the Lions tallied seven three-pointers, three of which came from junior guard Taylor Ward. Sophomore guard Miwa Tachibana also went 2-5 from three-point range, placing the Lions within striking distance of the Big Green. But ultimately, stellar three-point shooting was not enough to counterbalance the Light Blue's lackluster performance from inside the arc, and the Lions fell 62-52 to Dartmouth. The Lions missed nine layups over the course of the game. Head coach Paul Nixon said that while the Lions are getting into scoring positions inside the paint, the team needs to emphasize stronger finishing technique. "I feel like we need to do a better job of consistently making sure we're taking on-balance shots in the paint and using the backboard whenever possible, so that we're making sure we're taking as high-percentage shots as possible," Nixon said. And once the ball gets worked into the paint, Nixon said, pulling back isn't an option. "I think whenever you have a tendency to fade on your shot and not use the backboard, you really reduce your chances of making the shot," he said. "Regardless of who it is taking the shot, whether it's a guard on a drive or a post player making a post move, or a player getting a rebound, you need to be on balance, going up strong and using the backboard." The Lions' layup woes started prior to their matchup against Dartmouth. The Light Blue missed six layups in their 52-40 loss against Penn on Feb. 1 and missed eight layups against Princeton the next day. And in the Lions' double-overtime loss to Cornell in late January, they missed three layups in the last minute of regulation, any of which would have broken the 53-53 tie and given the Lions the advantage going into the game's final seconds. Considering the team's recent trouble in the paint, coupled with enduring issues from the free-throw line, it is missing too many opportunities to score. "We still have to get better free throws. When you have opportunities at the line, and it's either the front end of a 1-1 and you miss it or you go for two shots and you miss them both, it's like a turnover. It becomes an empty possession, and we just can't afford that many empty possessions," Nixon said. Despite the recent paint trouble for the Lions, Tachibana and Ward's poise from the outside demonstrate the potential to turn around the team's shooting in all areas. Asked about Tachibana and Ward's shooting contributions in recent games, Nixon said he is extremely pleased with their recent production. "Knocking down three-point shots is going to be critical for us as we head down the stretch of these remaining Ivy League games, that we have good production from them and they continue to knock down the open attempts," Nixon said. And with dribble penetration from experienced guards, such as senior guard Tyler Simpson, and strong post play by junior forward Courtney Bradford, the Lions have the necessary tools to see more production in the paint in upcoming games. caroline.bowman@columbiaspectator.com