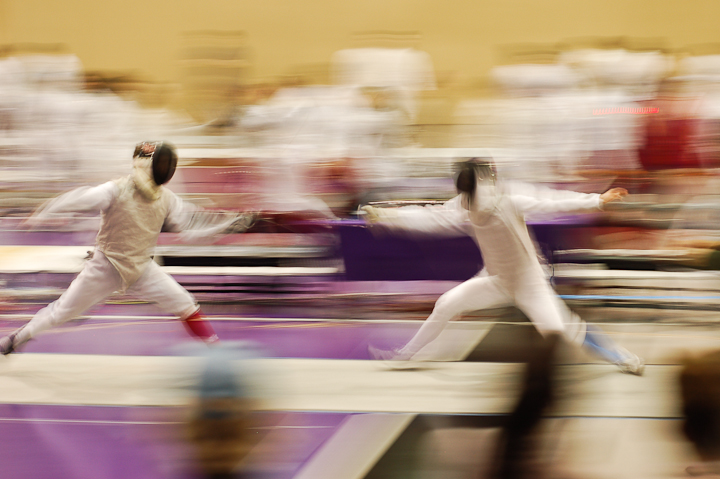 Columbia fencing is steeped in a rich tradition of success thanks to world-class coaching and training facilities.

By almost any measure, the men's and women's fencing program is the most accomplished athletic team in Columbia's history. But what explains the program's elite status? The answer in part lies within its elite coaches.

Over the past 115 years, the program has built an incredible list of collegiate achievements. It's won 13 NCAA team championships, 41 Ivy League championships, 33 individual NCAA championships, and has seen a number of athletes go on to fence at the highest international levels.

A great deal of Columbia's fencing success stems from the fact that the program has been led by a quintet of world-class coaches during most of its 115-year history.

Murray, Columbia's first coach earned the nickname the "Dean of American Fencers" and was considered by many to be the finest American-born coach of his age. While also coaching at the New York Athletic Club, Murray led the program for 50 years (1898-1948), taught over 2,500 fencers, and laid the foundation for Columbia's future success.

The second great Columbia fencing coach was Jose Velarde, who led the program to consecutive NCAA team championships in 1951 and 1952. To this day, Velarde remains the only fencing coach to win NCAA titles at multiple schools—Columbia and West Point. Velarde's time at Columbia was limited to three years when he was recalled to active military service during the Korean War.

Following Velarde's departure, the team went on to have one of its greatest runs under Irv DeKoff. During DeKoff's 15-year tenure, the team won four NCAA titles (1954, 1955, 1963, and 1965), took home 11 of the first 12 Ivy League championship round-robins, and had a miraculous winning percentage of .843—the highest in team history.

Yet perhaps the team's greatest coaches were its two most recent: George Kolombatovich and Aladar Kogler. Both retired in 2011 after 32 and 28 years with the program, respectively.

Kolombatovich remains one of the most respected names in international fencing. His list of accomplishments includes coaching the United States national team at six Junior World Championships and seven Junior Pan American Championships, authoring a major handbook for referees, and refereeing at three Olympic Games.

Kogler, a native of Hungary, coached the Czechoslovakian Olympic and national teams from 1963 to 1981 and served as a coach for the U.S. at four Olympic Games.

Like Kolombatovich, Kogler's tremendous knowledge of the sport and outstanding teaching methods have made him one of the most revered coaches in recent history.

"Aladar is a walking encyclopedia of knowledge," Roberts said. "You can't find someone that knows the sport as well as he does. Having those two coaches and being able to pursue any other outside coach you wanted, you had such an open wealth of knowledge coming into Columbia."

But coaching is only one part of the explanation for Columbia's success. The other key ingredient is the program's location in New York City, the mecca of American fencing. For decades, fencers have flocked to New York to train at its prestigious fencing clubs, receive lessons from top-flight coaches, and fence against world-class competition.

"New York is a tremendous hot spot of fencing in the United States," current head coach Michael Aufrichtig said. "You have probably 75 percent of the top fencers in the country working and training here full-time. With the exception of the Olympic Training Center, it's where everybody is."

For example, 13 out of the 20 fencers representing the United States at the 2012 London Olympic Games were associated with fencing clubs in the New York area.

One of those athletes, Jeff Spear, CC '10, stayed in New York City after graduating so that he could continue to train with Kogler at the New York Athletic Club in order to give himself the best chance at qualifying for the men's sabre squad.

"The principle advantages of New York are the number of high-level athletes with whom to train and the available coaches," Spear said in an email. "The greatest concentration in both for all weapons is in New York. I stayed to keep training with my coach and to take advantage of these training opportunities. There was simply nowhere else to go."

But Columbia fencing did not always exploit its geographical advantage. The program only began to do so under Kolombatovich and Kogler, and has continued under Aufrichtig.

"The program had pretty much hit rock bottom when I came in 1979," Kolombatovich said. "The three years prior to my getting there, the team had a 1-10 record each year, losing all of their Ivy matches. The whole program needed a complete turnaround because there was no recruiting going on. Without getting recruits, Columbia was unable to be the kind of program it could be."

Kolombatovich knew that in order to recruit top talent, the program would need to provide fencers the flexibility to follow their own training regimens at the clubs downtown.

"I started recruiting serious fencers with collegiate goals, national goals, and international goals," Kolombatovich said. "For someone at that level, to help them achieve their highest level, you needed to afford them the opportunity to spar with top fencers, which New York City makes available to them. Being open to that kind of training allowed a lot of top fencers to realize they could have the very best of both worlds."

The importance of being in New York for fencers has only amplified over the years. Until recently, fencers had two training options: the Fencer's Club in North Chelsea and the New York Athletic Club on Central Park South. But the number of renowned clubs has since increased, further enhancing the network of great fencers living and training in the area. These new clubs include the Manhattan Fencing Center near Times Square, Empire United Fencing across the Hudson River in Hoboken, N.J., and the Peter Westbrook Foundation, which is located at the Fencer's Club facilities.

"I don't know much about how the situation has changed for other weapons, but for men's sabre, what was dominance for NYC ten years ago has become practically a monopoly today," Spear said.

A trio of large universities—Ohio State, Notre Dame, and Penn State—has dominated the NCAA Championships in recent years, winning 19 of the last 25 titles. The schools boast a number of advantages over Columbia, including tremendous facilities and the ability to provide athletic and academic scholarships.

Yet despite these opponents and new challenges, there is little doubt within the program that Columbia fencing, thanks to great coaching and an optimal location, will continue to do what it has always done—win.