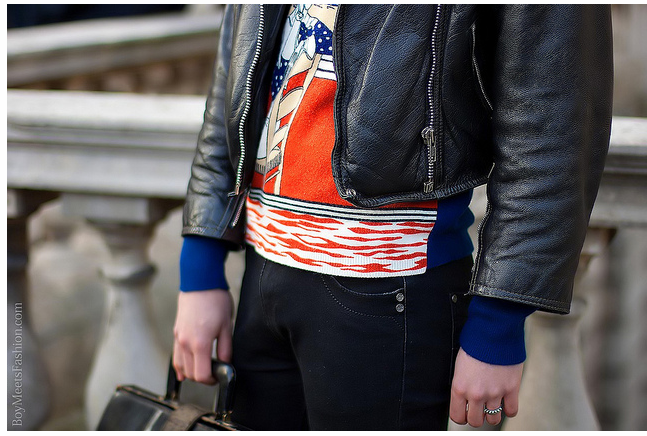 This week, The Eye's Hari Nef explores the implications of Vanity Fair's recent announcement that it will begin to feature non-celebrities on its best-dressed list. If you're hoping to be admitted, here are some tips for appropriate street style at various venues around campus. Broadway between 114th and 113th: International Style The furtive freshman is a staple of this block and can often be spotted eyeing Costco-sized Svedkas and praying that the chalk hasn't rubbed off of their learner's permits. Be sure to wear your most sophisticated outfit here---you know, the one that says, "Why yes, I am over 21, and I do have a mature taste palate for fine wines and liquors." Try not to accessorize with your NSOP badge, and remember: burgundy (plastic bags) is the new black! more Broadway between 113th and 112th: Nussbaum & Wu Chic It's all about the hangover haute couture. The real trick to eating unlimited carbs is wearing exercise clothes to create the illusion that you are perennially on your way to or from the gym. Meanwhile, you can nurse your headache and give those new Lululemon leggings a real workout by bingeing on breakfast sandwiches and black-and-white cookies. And to all of those walk-of-shame coffee guzzlers out there, we see you strutting yo stuff---and we think that body-con dress looks even hotter the morning after. Milano Swag Work the big coat (unless you're Forest Whitaker---in that case, it will apparently make you look suspicious), and make sure you have mountains of cash to spare, because that box of Cheez-Its will cost you around $13.95. And remember to bring your CUID; everyone knows that flaunting your Flex is très chic. Oren's Ensemble Too hip for Starbucks but too lazy to haul your ass to Joe? Throw on your thickest beanie and dirtiest furs to make a sartorial splash at Oren's (aka 1020 minus a liquor license, ). Because orange mocha frapuccinos are so 2001. The Heights The Heights is essentially a graveyard for going-out ensembles. After you've lost your heels downtown, ripped your tights to fit in at 1020, and earned a massive beer stain at Mel's, you know it's time to scale the Heights. Bright colors pair best with margaritas, and those weird-ass running shoes with individual toes are a definite must for the harrowing climb up the slippery stairs. Broadway between 112th and 111th: Mel's Mafia Girls (I mean women, sorry Barnard) can often be spotted outside of Mel's sporting heels and dresses or sorority mixer swag. Bonus points for speaking a foreign language or smoking a foreign cig. Guys are a mix of freshman rowers, frat stars, and confused older dudes who just want a burger and a shake. Trying to find your friends in a crowd of identical button-downs and artificially straight hair is always going to be a challenge, so make sure to take off your beer goggles and use the Mel's light-up sign as your very own North Star. Amsterdam between 114th and 113th: Amsterdam Apparel Otherwise known as "not Broadway," Amsterdam is a great place to hide from the law/the entire Columbia community. Unless you're rocking a post-CAVA morning-after ensemble and accessorizing with an IV, you're probably enjoying the culinary fare at Strokos or Artopolis. Feel free to experiment with your outfits in addition to your crèpe toppings. I can't reiterate enough how unlikely it is that you'll run into anyone you know. Of course, if you're trying to pick up a hot doctor, you might want to retire your gnarly sweats and CU hoodie.