Let's talk about sex (and watch it too): CineKink Film Festival celebrates 10 years

Let's talk about sex (and watch it too): CineKink Film Festival celebrates 10 years 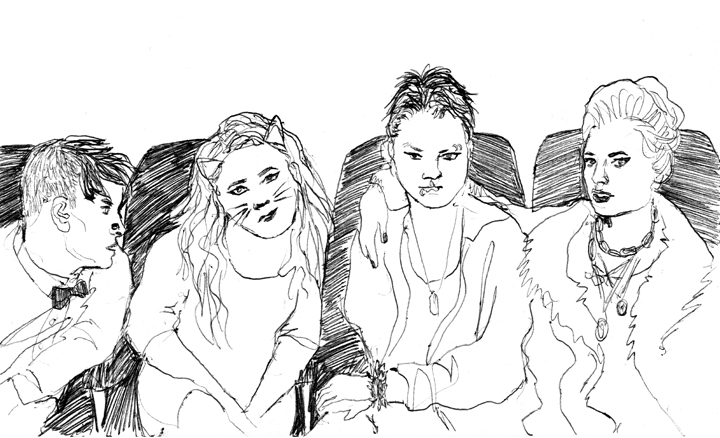 It's titillating, it's sexy, it's kink. It's the first night of the CineKink Film Festival.

For Lisa Vandever, co-founder and director of CineKink, the term "kink" is central to the festival. "It's generally outside of anything that's heteronormative and focused on monogamy. There are some things that are traditionally considered kinky—such as S&M, swinging, polyamory—which are generally outside the mainstream."

CineKink's aim is to counter just that. With the advent of sex-positivity and kink-positivity in our culture over the past decade, CineKink has also become kinkier and has gained more traction in sex-positive communities in New York City, and more submissions from filmmakers across the world.

The aspect of sex-positivity is just as important as the alternative and kinky aspect of CineKink. Representations of non-cissexual, non-heterosexual, and kinky people's sexualities already have existed for a while in film, but they have not necessarily been the most true-to-life portrayals, often making sweeping generalizations or implications about a certain type of kink.

Education about the existence of a variety of sexualities that exist has been one of CineKink's biggest successes—and it is a goal that it has improved on achieving throughout the years.

The diversity of sexualities that film festivals like CineKink put the spotlight on is in and of itself incredibly important toward influencing sexual attitudes.

"People can see something and think, Maybe that's how I am. I just never got to have a representation,'" Angel said. "Sometimes people just need a little push to know what's going on."

Filmmakers face a conflict when they want to tell a darker story or provide a dramatic or tragic story arc. They still want to portray alternative sexualities in a way that is supportive without leading audiences to think they are condemning an entire community as negative.

"I'm trying not to send a message that the industry is bad. I don't think it is," she said.

"I'm showing how naiveté can make you do stupid things," she said.

To create a balance between the negative and the positive, she keeps all the sessions in the movie in which a client violates a negotiation to avoid sound bites and show the arc of how the dynamic shifts, while the positive scenes are montaged. Vandever agrees.

"The films aren't always going to be "happy happy, ra ra, joy, joy," she said. "There are ramifications, there are complications. But we do try to get away from every story about kink portraying kink as a problem. They could just happen to be kinky and that's part of the story. It's not that kink's necessarily causing the problems."

Lee wrote that they see sex films—particularly porn—as an incredibly useful way to spark more conversations about the subject of sex.

The Internet has been an incredible factor in promoting sexual attitudes since CineKink's birth in 2003.

"The Internet's huge, in terms of more education, whereas people might've once thought it was a freaky interest and then on the Internet you see all these other people who are into it," Vandever said. "More and more people become comfortable with it. It's not this weird thing that's hidden away."

In line with this, Vandever aims to take more advantage of the Internet in order to market CineKink differently in the future.

"A lot of the programming for films have a brief festival run," she said. "It seems like after the festival nothing really happens with them. Now we want to work with filmmakers for online marketing and niche marketing to help them get audience for the work."

"Mainstream is quite boring. It doesn't want people like me and I'm not mainstream," Angel said. "So I think CineKink calling itself alternative makes it stronger. It shows we're not in the box of society, which is exactly what my work is about."