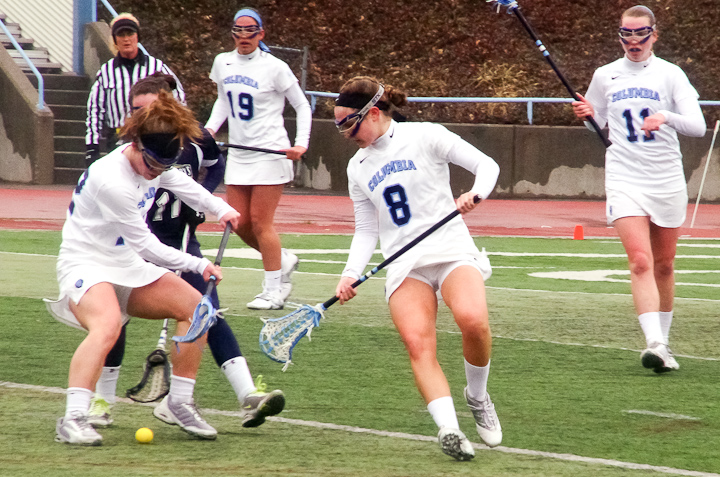 A group of Lions overwhelm the opposition to obtain control.

With little time off after Wednesday's loss to Lafayette, the Light Blue lacrosse team (1-1, 0-0 Ivy) will once again hit the road to face Brown (1-0, 0-0 Ivy) in each team's first Ivy League game of the season.

Head coach Liz Kittleman Jackson is adamant about remaining focused on the future despite yesterday's loss, noting the passion with which the team played in spite of playing from behind for the majority of the match. "When you have a team that plays with that kind of heart, then you really have something to work with as a coaching staff," Jackson said.

In fact, despite going into its third game in seven days, the team remains focused on preparing for the Bears. One major adjustment Jackson hopes the team makes is its communication within the game, particularly when the other team is on the offensive. "If you can make the adjustments that are necessary and you can vocalize that during play, you can stop some of those runs," Jackson said.

That will be especially important against a Brown team that likes to push the pace, as evidenced by its 15-10 win over George Mason, in which seven players got on the board. The Bears were led by the strong offensive play of midfielder Abby Bunting, who put up four goals, and attacker Bre Hudgins, who added three goals and three of the team's five assists.

Though Jackson noted that they don't prepare for conference games any differently, she has no doubts the Lions are motivated to win their Ivy opener. "I think our kids are going into this game with a ton of fire," Jackson said. "I think they really want this win and they're ready for it."

The Lions are set to face off against the Bears at 1 p.m. this Saturday in Providence.