Nutella in Ferris Booth costs Dining $5,000 per week, in part due to dining hall thievery

Nutella in Ferris Booth costs Dining $5,000 per week, in part due to dining hall thievery 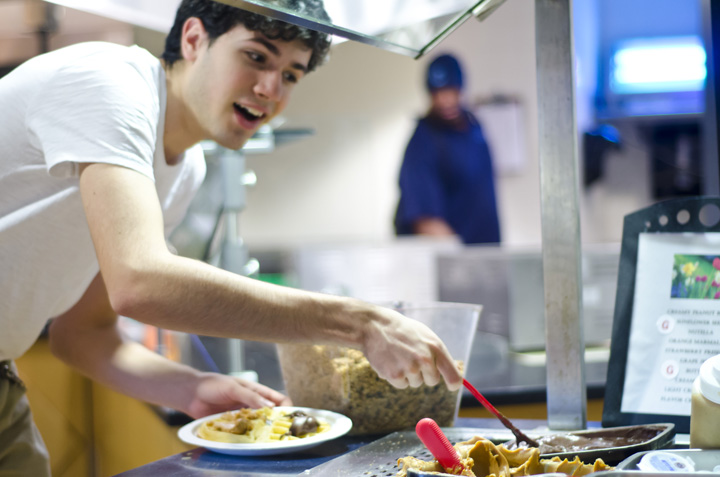 It seems like undergrads have a sweet tooth—and it's costing Dining $5,000 per week in Nutella.

Since Dining started offering the sweet spread in Ferris Booth Commons last month, administrators have observed a high demand for Nutella—up to 100 pounds per day. But that seemly sum could be due in part to students stealing the chocolate-hazelnut topping.

"The demand [for Nutella] has been greater than originally expected," Vicki Dunn, executive director of Dining Services, said in an email. "Students have been filling cups of Nutella to-go in Ferris Booth Commons and taking the full jars out of John Jay, which means we're going through product faster than anticipated."

Dunn told Columbia College Student Council representatives that the total spent on Nutella came to $5,000 the week it was first offered in Ferris the week of Feb. 11, representative Peter Bailinson, CC '16 and a Spectator outreach and development associate, said. Dunn "couldn't really believe it either, just how much they were going through the stuff," Bailinson said. At that rate, Dining would spend $250,000 on the product in one year.

Dunn declined to comment on how much Dining spends on specific foods in the dining halls.

The problem, said CCSC representative Grayson Warrick, CC '16, who was also in the meeting with Dunn, is that many people are taking Nutella out of the dining hall and letting it go to waste.

Dining hall waste has increased in the past year: The fall of 2012 was the most wasteful semester since Ferris eliminated trays, according to Bailinson and Warrick. And at the last "plate scraping" conducted by EcoReps, during which students weighed the amount of food trashed in each dining hall, the group reported 60 pounds more waste than at the previous event, according to Dunn.

At up to $2,363 per semester, the price of the dining plan may lead to waste, Bailinson said.

"When you're paying that much for a dining plan, some people feel a bit more entitled to taking things from the dining hall," he said. "But what they don't realize is that dining uses any extra money to get awesome new items like Nutella, almond butter, and to make structural changes like the JJ's renovation."

While Dining is not considering getting rid of Nutella, it has noted that it is hesitant to offer other "luxury" items, like lobster tails, due to similarly high anticipated demand.
Dunn does not characterize Nutella as especially expensive, she said.

"Given the quantities of food required to serve 35,000 meals a week, no item is considered inexpensive," she said.

Bailinson noted that while the discussion on a Facebook post he made on the cost of Nutella began as he had hoped, with students realizing they sometimes take more than they need, he was disappointed when it veered off into a discussion of price comparison.

"Some of it was positive, some of it was very questioning of the dining hall methods," Warrick said, referring to a student who calculated that based on the resale price of Nutella at Costco, it would require 238 pounds of Nutella to arrive at $5,000 per week.

Students at Ferris on Monday said that they thought a change needed to be made.

"From a purely economical perspective, if we decide we want to have more of this, the dining hall will have to raise the prices," he said.

"If they're spending so much money to afford one student taking a full jar of Nutella, I don't think that's reasonable or we should allow that to happen," Xiaoyu Guo, SEAS '13, said. "It's all you can eat, and all you can hide, so students wouldn't stop."

Others saw the tempting treat as symbolic of larger social ills.

"The ramifications and the reasons behind it are bigger than Ferris Booth or the dining hall in general, it's coming from a culture of consumption where ideas like waste don't mean anything," Farin Jarod Kautz, GS '14, said.