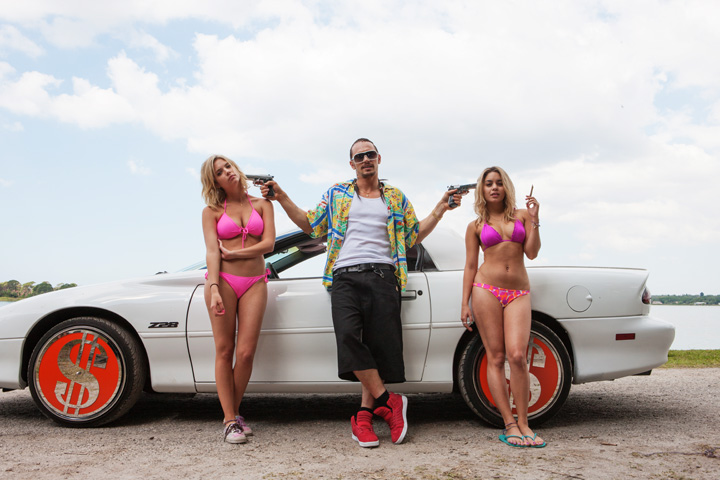 Courtesy of A24 Films

In "Spring Breakers," James Franco (center) plays a rapper named Alien who brings out the wild side of four girls on spring break.

When director Harmony Korine announced that he was working a film starring Selena Gomez and Vanessa Hudgens, with James Franco as a Riff Raff-like rapper and a soundtrack produced by Skrillex, the typical response was a bemused, "WTF?"

Korine, the enfant terrible of underground cinema, has previously focused on freaks and weirdos portrayed by unknowns, so his casting of squeaky-clean Disney stars as the leads in his latest offering—"Spring Breakers," out March 22—was unexpected. But for a director as playful as Korine, surprising the viewer is nothing less than essential. And in "Spring Breakers," Korine has created a brash, beautiful monster.

The film picks up as bored college students Faith (Gomez), Candy (Hudgens), Brit (Ashley Benson) and Cotty (Korine's wife, Rachel) search for the ultimate spring break adventure. After holding up a chicken shack, the girls head to St. Petersburg, Fla., for sun, sex, and utter debauchery, but are soon arrested as their drug-fueled antics spin out of control. Fortunately, they are bailed out by local rapper and dealer Alien (James Franco), and they quickly fall headfirst into a dizzying world of death, drug wars, and drive-by's.

You'd hardly expect stellar performances from the stars of such cinematic masterpieces as "High School Musical" and "Wizards of Waverly Place: The Movie," but Hudgens and Gomez are surprisingly convincing as disillusioned college students adapting to an unfamiliar world. Hudgens is compellingly deadened as Candy, brought alive only by the rush of a gun in her hand. Gomez, on the other hand, shines as the innocent Faith, a character tragically out of place both in her cult-like religious community and amid the hedonism of St. Pete. Without the makeup and dip-dyed hair of the other girls, she is disturbingly childlike, making her seem all the more adrift in a world that is clearly not her own.

Korine's depiction of the girls' transformation from hard-partying coeds to calculated killers is a departure from his previous films, whose protagonists were mainly outcasts unable to fit into society at large. His spring breakers are the ultimate insiders, integrating with ease first into the debauchery of St. Pete's beaches and condos, then into the seedy underworld run by Alien and rival dealer Archie (Gucci Mane). Even so, the film's oddities are typically Korine. Bongs made from baby dolls, identical twins, and subversive cameos (Heather Morris of "Glee" has a particularly juicy walk-on role) remind the viewer that Korine's world is a step away from reality.

Visually, the film is sumptuous. Cinematographer Benoît Debie builds on the neon wonderlands he constructed in "Enter The Void" to create a hypnotic visual statement inspired equally by "Miami Vice" and Miami booty bass. His constant use of slow-motion shots and montage gives the film a music video-like atmosphere, with images contributing as much to the story as the dialogue. A pulsing EDM soundtrack produced by Skrillex and "Drive" composer Cliff Martinez perfectly complements Debie's maximalist visuals.

Korine, who wrote the screenplay as well as directed, makes extensive use of recursion to show the progressive corruption of the spring break ideal. Phrases like "spring break forever" are repeated again and again, become more menacing than reassuring as the film goes on and creating a Brechtian atmosphere. Meanwhile, images—such as the opening slo-mo montage of wasted 20-somethings cavorting on the beach—are re-used in increasingly unsettling contexts. Korine wants his viewer to focus on the iconic power of phrase and image rather than on the plot itself, and in a mainstream setting, this experimentalism is thrillingly refreshing.

At times, though, it's hard to take Korine's vision seriously. Franco's character is so decidedly ludicrous, from his faux-gangsta speak to the hundred dollar bills strewn across his house, that it's difficult to discern Korine's purpose in depicting such a hip-hop cliché. Alien could be a symbol of extreme self-delusion, but he could just as well exemplify someone who not only lives his dream but also enables others to do the same. The symbolic dialogue can be equally frustrating, as it clouds the girls' motivations and prevents the audience from being able to see into their heads.

These quibbles, though, hardly detract from "Spring Breakers" as a whole. If you're looking for subtlety, "Amour" it ain't, but if you're looking for a provocative and enjoyable film over spring break—or if you just want to see James Franco singing Britney—there's nothing more appropriate.