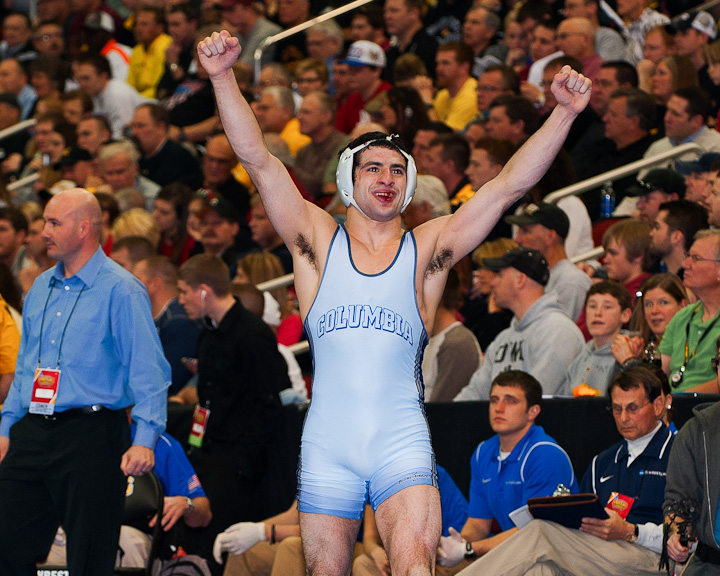 Senior Steve Santos emerges bloody but victorious from the contest for third-place.

Senior Steve Santos made history this weekend at the NCAA Division I Wrestling Championships, winning third place in the 149-pound weight class—the best finish in Columbia wrestling history.
Having received a bid after an impressive showing at the EIWA Championships, Santos entered the bracket as a fifth seed. After overtaking lower-ranked opponents, Santos moved on to more challenging foes.

Despite eventually falling in the semifinals to Oklahoma State's Jordan Oliver, ranked No. 1, Santos maintained composure and focused on winning third place. On Saturday, he toppled the seventh seed, Scott Sakaguchi from Oregon State, and moved on to Minnesota's Dylan Ness, the sixth seed.

The match began with Santos scoring the first two points, only to find the match tied up by the end of the first period. Santos started the second period on the bottom and came out aggressively for a quick reversal a mere 31 seconds in, and he rode Ness out for the remainder of the three minutes.

In the final period, Santos wasted no time in controlling his opponent. He took Ness down for the second time only 10 seconds into the period, riding him out again to add an extra point for a final score of 7-3.

The crowd at the Wells Fargo Arena in Des Moines, Iowa acknowledged Santos with a standing ovation as Santos dominated Ness for the third-place victory.

This third-place finish marks the culmination of a successful career for Santos, who also achieved the status of All-American with the third place finish. He is the first wristler to receive the honor since 2007.