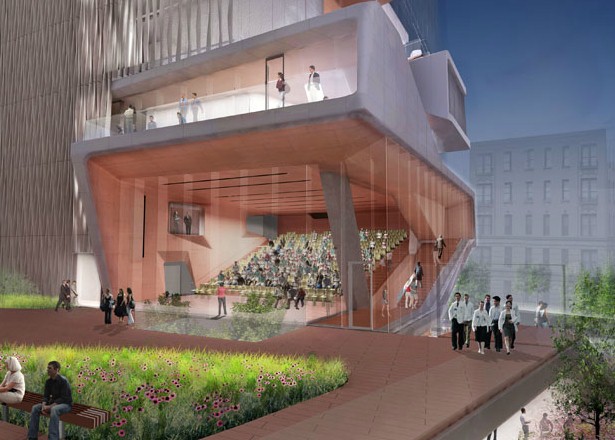 A rendering of the medical campus new education building, to be completed in 2016.

A gift of $20 million to the Columbia University Medical Center will support the construction of a new Medical and Graduate Education Building, part of Columbia's recent effort to revitalize the Medical Center campus.

The donation from Philip Milstein, CC '71, and Cheryl Milstein, BC '82, was announced last Monday.

The new building will be geared specifically toward training students in the College of Physicians and Surgeons, as well as in the Graduate School of Arts and Sciences' biomedical science departments. Construction on the building began in August 2012 and is scheduled to finish in 2016.

Medical center administrators said in a statement that the building will include "innovative classroom and study spaces that will incorporate state-of-the-art information technology while facilitating collaborative, team-based learning."

"Over a lifetime of exceptional accomplishment, Philip Milstein has maintained an enduring commitment to his alma mater, and for that Columbia will be forever grateful," Bollinger said. "This latest gift extends the family's ongoing commitment to ensuring world class medical training and the highest quality health care that saves lives and finds new cures."

The Milstein family has made leading donations for the Milstein Hospital Building, the main building of the New York-Presbyterian Hospital, and for the creation of the Vivian and Seymour Milstein Family Heart Foundation in 2005. Columbia has given Philip Milstein multiple awards, including the Alexander Hamilton Medal in 2001, for his service.

This is the latest of several donations to the Medical Center, including a $25 million donation from Mayor Michael Bloomberg in February to fund amyotrophic lateral sclerosis and a donation from Roy Vagelos, P&S '54, and Diana Vagelos, BC '55, in 2010 to support the construction of the education building.

Biology professor Andrea Califano said that the new building would create an opportunity to address what he called "one of the critical deficiencies of our current campus": the lack of community-building student space on the medical campus.

"This is really going to create a completely new focus," Califano said, adding that the new building will create "social context for interaction that doesn't currently exist."

Califano said that given the urban location of the campus, common spaces were mostly labs or classrooms, but the new building's plans include common spaces that utilize social media or other new technology to bring people together. He added that he felt that the medical center's "most vulnerable point" in attracting students was its apparent lack of a strong, cohesive student community.

"It's a visionary donation to create exactly what the campus was missing," Califano said.

The building is being designed by Diller Scofidio + Renfro Executive Architects—which is also the lead architect on the Business School building in Manhattanville—in collaboration with Gensler.