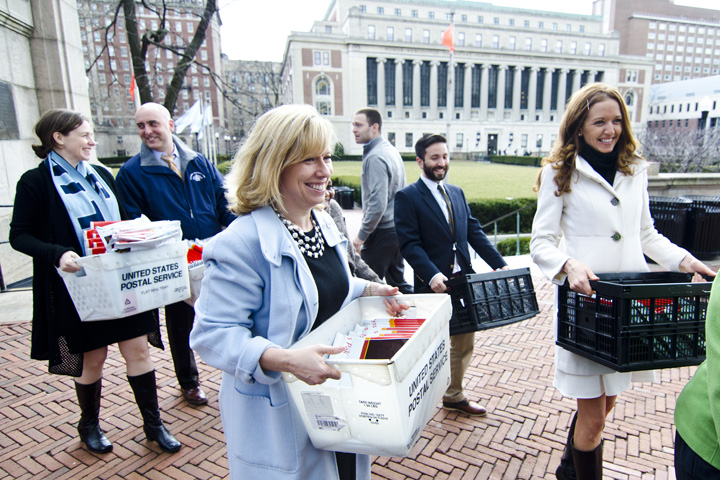 Dean of Undergraduate Admissions Jessica Marinaccio wore Columbia blue when she and the rest of the admissions office mailed the regular decision letters to the Class of 2017 on Thursday.

The admit rate for Columbia College and the School of Engineering and Applied Science's Class of 2017 dropped to a record-low this year, to 6.89 percent, after 2,311 applicants were admitted from a pool of 33,531.

Jessica Marinaccio, dean of undergraduate admissions and financial aid, said in a statement that the statistics reflect an arduous process of deliberation and conversation about each applicant.

"The class admitted today offers much more to Columbia than just academic credentials and impressive achievements," she said. "They embody the fundamental character of Columbia University, sharing a deep engagement with local and global issues, a spirited devotion to intellectual inquiry and an eagerness to add their unique perspectives to our diverse student body."

This year, the number of overall applications to both schools rose 5 percent from the year before. The class of 2017 was selected from a pool of applicants hailing from all 50 states, the U.S. territories, and nearly 70 countries. Two years ago, for the class of 2015, the acceptance rate was 6.92 percent, the previous selectivity record.

According to Columbia College spokesperson Sydney Gross, 1,351 students checked their decisions online within the first 30 seconds that they were available, starting at 5 p.m. EDT. In fewer than four minutes, a student from the Chicago suburbs became the first to indicate plans to enroll.

Now that the letters of acceptance have been mailed, the Office of Undergraduate Admissions will be hosting a number of outreach efforts, including the two-day overnight visit Days on Campus, lunch programs, phone-a-thons, and postcards.

"Over the next few weeks, we will focus our efforts on showing them how a Columbia education could in turn enrich their lives," Marinaccio said.

Wang said that while she's still weighing her options, she and her parents were ecstatic to find out that she had been accepted.

"We were, like, jumping up and down," she said. "I'm a little ashamed to admit that I did cry a little."

Barnard admitted its class of 2017 Wednesday but has not yet released any details.

Hannah Borghi, from Central Bucks High School East in Bucks County, Pa., checked her decision Wednesday night and said she was "over the moon" when she read her acceptance letter. She said she is still waiting to hear back from a few other schools but that Barnard remains her first choice.

"I freaked out," she said. "I've wanted to go to Barnard since I was 14 or something ridiculous like that. I told my parents right after, and they, like, cried. It was just emotional."

Correction: An earlier version of this article said that this is the first year that the Office of Admissions could see the number of students who check their online decisions. Spectator regrets the error.