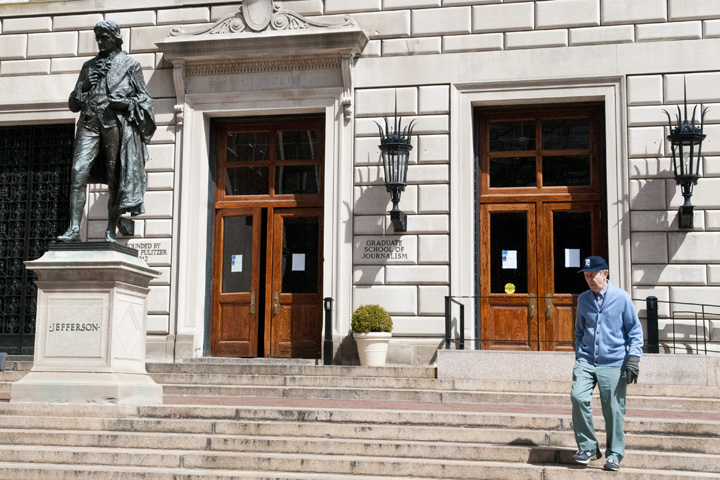 Steve Coll, the new dean of Columbia's Journalism School, is proposing changes to the Master's program.

Steve Coll, the new Journalism School dean, won't take his job until next month, but he already has bold ideas for the school.

Coll is looking to create a two-year master's program, increase the rigor of the curriculum, and assess models to lower tuition for Journalism students.

Last month, Coll was appointed dean of the Columbia Journalism School. A former Washington Post managing editor and two-time Pulitzer Prize winner, he is a staff writer at the New Yorker, like his predecessor, Nicholas Lemann.

Coll did not attend journalism school, instead taking a position at California magazine directly following his graduation from Occidental College. He majored in history and English, and said that by the time he graduated, he knew he wanted to report for the rest of his life.

His career path reflects a widely held advice among many journalists in the industry: getting a job right away can be more worthwhile than going to journalism school for college graduates. And even though Coll is taking over one of the country's most prestigious graduate schools of journalism, he agrees.

"Frankly, if you went to an Ivy League school as an undergraduate and got a great internship, you can skip over journalism school," he said in an interview Monday. "But I always had an enormous amount of respect for people who took the time to commit themselves to this career by taking on a graduate degree."

Coll said that a two-year master's program would provide more flexibility than the current one-year program does.

"My going-in thinking is that the school would benefit from a uniform two-year approach if it were affordable for students," Coll said, adding that he believes he could raise money for financial aid using strategies he learned while working for nonprofit agencies.

He also said he wanted to make the program more ambitious. The curriculum of the school should be as competitive and challenging as that of a medical school, he said.

"At the end of a very rigorous medical education, you've had some time to really be challenged to think and to learn," he said. "I'd love for a journalism degree to be like that."

"Fundamentally, I believe that the value that the school creates in the lives of students is the experience of journalism," he said.

But Coll said $51,904, the current tuition rates for the school, might be too much to pay for that experience, especially as journalism is not a lucrative industry.

"In the era of the web and social media, information wants to be free but journalism wants to be paid," Coll said. "We still need to solve that dilemma."

According to the Bureau of Labor Statistics, reporters and correspondents will see a job outlook decline of 8 percent from 2010 to 2020. Coll, however, said he sees no reason this grim forecast should deter any journalism hopefuls.

"When I came out of school, most of the young people I knew wanted to work on newspapers," he said. "It wasn't the newspapers that drew everybody, it was the opportunity to have a career in journalism and to live an engaged life of variety,"

"That hasn't changed—it's still thrilling and it still creates profitable companies," he added.

Journalism schools have been profiting, too, as the admission percentages and demand have been going up. In 2009 alone, Columbia's Journalism School saw a 38 percent increase in applications from the previous year.

Soon after his appointment, Coll was criticized for being behind the times in an industry that depends on social media. Michael Wolff of USA Today, CC '75, called him a "quite boring" writer who "has never tweeted in his life."

"As journalism becomes an ever more challenged profession, people trying to build a journalism career might want to know how to hold an audience's attention," Wolff wrote in a widely circulated article last month.

Coll, who has now tweeted twice from his new account (and has 1,291 followers), said a focus on social media is misplaced. More important, he said, is knowing how to use the huge amounts of data available today to better perform functions that journalists have performed in the past.

"As long as Columbia doesn't fall behind and lose confidence about the basic values about journalism, there's no reason to lose confidence," Coll said.

Students Wednesday were divided on Coll's proposals and lack of social media expertise.

Michael Orr, Journalism '13, said he thought a two-year curriculum would be beneficial.

"You're not allowed to select your schedule until the second semester," he said. "By now, I believe I am starting to get the hang of this semester, and it's about to end. That's a bit frustrating, so I wouldn't mind being here longer."

"If you can't share a link or put it out on social media, at a certain point those stories are going to sink," he said. While the school is already doing better at "incorporating social media and the web into our classes," he said, there's too much emphasis on print reporting.

"Though it's not a bad idea, it wouldn't be helpful if the tuition was raised to $100,000, as tuition is a huge factor," she said. "He would have to lower the tuition if he plans on expanding the program, and think about how that two-year program would impact the school. I believe that the master's degree is fine as it is."

"I don't think it is a process that is broken and needs to be fixed in any way," she said.

Owens, who held a career in journalism before deciding to come to Columbia because she "felt the need" to gain skills, said Twitter is often overemphasized in the industry.

"Twitter is valuable, but I do not believe that it is the determinant of whether one is or is not an excellent journalist," she said. "To be successful, one needs to have a combination of familiarity with digital and social media, but there is no substitute for excellent reporting and writing."

Correction: An earlier version of this story stated that the tuition for the school was $84,884. It is actually $51,904. Spectator regrets the error.