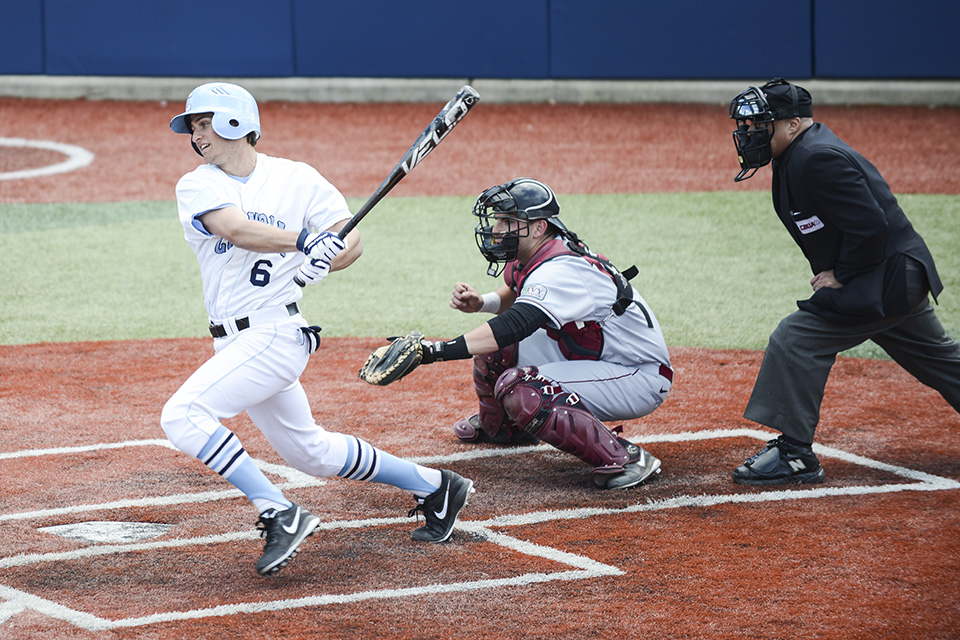 Senior Nick Ferraresi helped lead the charge against Brown in Game 2 on Sunday with four hits, two runs, and an RBI in the Lions 13-4 drubbing of the Bears.

This weekend, the baseball team posted a four-game sweep in conference play for the first time since the 2008 season.

Columbia (13-15, 6-2 Ivy) started things off by winning both games of its Saturday doubleheader with Yale (6-18, 3-5 Ivy) before earning a pair of victories over Brown (3-19, 1-7 Ivy) on Sunday in Providence. The Lions benefited from good pitching all weekend long and had a strong enough offense to vault them to the top of the Lou Gehrig Division only two weekends into the season.

Junior lefty David Speer set the tone in Game 1 against the Bulldogs, pitching six innings of one-run ball while striking out five.

"He battled out of some trouble on Saturday," Lions head coach Brett Boretti said. "Probably—for him—didn't have his best stuff, but still found a way to get out of jams and make it possible for us to sneak a couple runs late to win the game."

Despite Speer's performance on the mound, the Lions trailed 1-0 most of the way. But in the top of the seventh and final inning, sophomore outfielder Joey Falcone hit a clutch pinch-hit home run to put Columbia on the board and even the score at 1-1. Two batters later, senior left fielder Eric Williams hit a double to plate junior catcher Mike Fischer and give the Light Blue a 2-1 edge.

Senior righty Alex Black came on to relieve Speer in the bottom of the frame and struck out the side in order to earn the save and seal the Columbia victory.

"Coming back in that first one really set the tone for the rest of the weekend," Boretti said. "I think guys picked up a lot of confidence there, and it rolled right into Game 2."

The Lions led all the way during the nightcap in New Haven, scoring a run in each of the first three innings. Junior righty Joey Donino had a solid outing, giving up two runs in six 1-3 innings, and sophomore lefty Mike Weisman was stellar in relief, pitching 2.2 scoreless innings and striking out six Bulldogs in the 5-2 victory.

Freshman righty Adam Cline, who struggled against Dartmouth last week, got the nod in the final game of the weekend. Cline lasted five innings and gave up three runs, striking out six and earning the victory in Game 2 at Brown on Sunday afternoon.

"He threw the ball well. I don't think last week really fazed him much at all," Boretti said. "He's got more starts to come, and one start doesn't dictate your whole season."

"He's very mature for being a freshman, that's for sure, and I think that helps him on the hill," Boretti added.

But the Lions' offense stole the show, scoring 13 runs off 19 hits, eight of which went for extra bases. Sophomore third baseman David Vandercook led the way with four RBIs off a homer and a triple, and six Lions had at least two hits in the game.

The 13-4 victory brought the second week of conference play to a close.

"It was a successful weekend," Boretti said. "Now it's time to enjoy it and get ready for Tuesday."