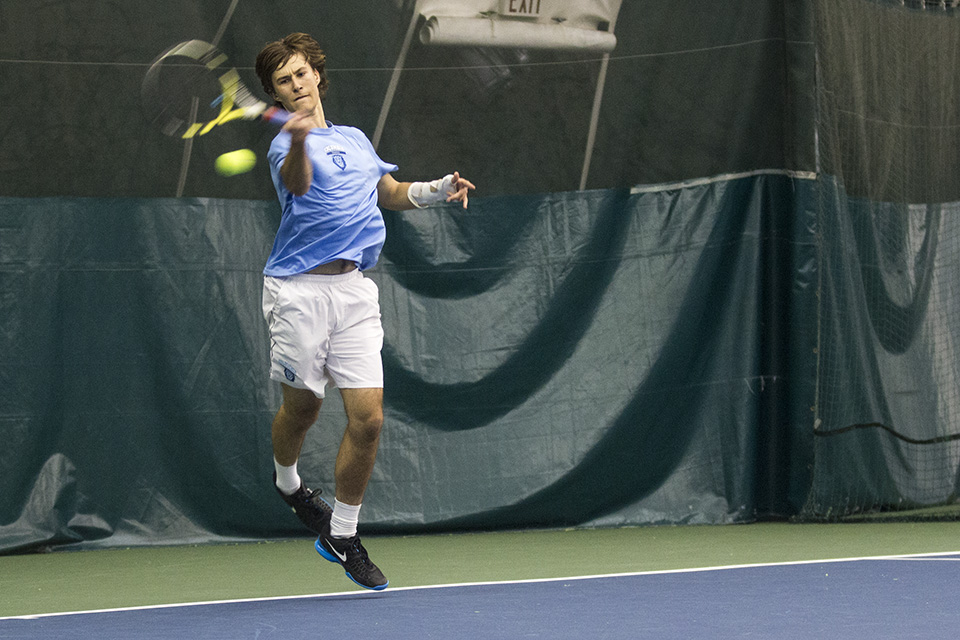 Sophomore Bert Vancura's strong performance in singles against Harvard was not enough to propel the Light Blue to victory in Cambridge.

The women's team had 12 of its competitors finish in the top five of various races, showing great versatility and dominance across a wide range of events--specifically the sprints and the distance races.

Sophomore Madeline Rathbun and junior Danika Simonson finished in second and third place in the second division of the 1,500-meter run. Read more >>

Coming off a split mid-week doubleheader with Farleigh Dickinson, Columbia softball (15-15, 4-4 Ivy) had a strong weekend against Yale and Brown, winning three of four on the road.

The Light Blue started the weekend with an impressive 12-1 victory at Brown. Freshman Nicole Borchard was the star at the plate, going four-for-four with a double and four RBIs. Freshmen Alyssa Swearingen and Macy Shrum each added a round tripper, and they finished the game with five RBIs and four runs between them. Read more >>

Heading into the weekend, men's tennis was sitting on a strong 11-5 record, having beaten archrival Cornell, 4-3, to start off conference play the previous Saturday. Yet the No. 40 Lions could not continue the streak in Cambridge or Hanover, with No. 18 Harvard pulling off a 4-3 victory, and Dartmouth taking down the Lions 4-2.

Columbia (11-7, 1-2 Ivy) started off the weekend with its match at Harvard (14-4, 2-0). With doubles split—the Light Blue's sophomore Winston Lin and freshman Eric Rubin took the No. 3 match in a convincing 8-4 fashion, and Harvard's Andy Nguyen and Nicky Hu won their No. 2 match with the same exact score—the focus shifted to the No. 1 matchup. There, the Lions' No. 36 sophomore duo of Ashok Narayana and Max Schnur fell 8-5 to No. 65 Casey MacMaster and Denis Nguyen, and the first point went to the Crimson. Read more >>

The Lions demonstrated some strengths on the defensive side of the ball, particularly in the stellar play of freshman Colleen Packer. The goalkeeper made 10 of her 12 saves in the first half to keep the score low as Penn attempted 19 shots on goal to the Lions' 12. Despite her best efforts, the Light Blue entered halftime down 6-3, thanks in no small part to Penn goalkeeper Lucy Ferguson's 10 stops on the day. Read more >>