How women's tennis could go from worst to first

How women's tennis could go from worst to first 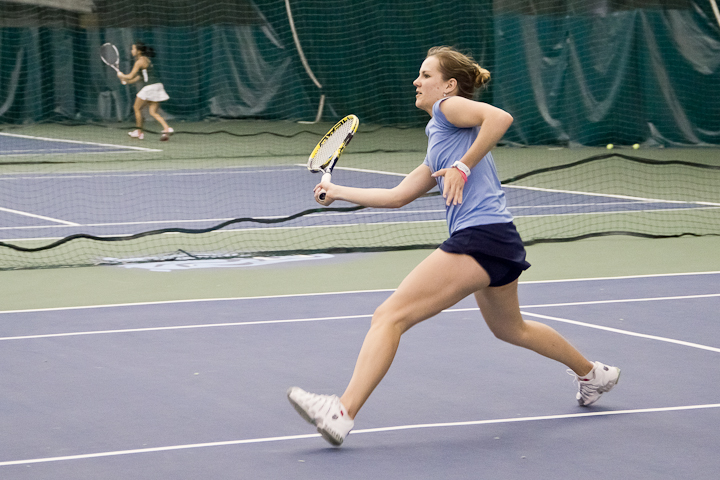 The Lions' No. 1 singles player and ranked No. 69 in the nation, Nicole Bartnik has been turning heads all season with her impressive play against tough opponents.

The Lions were struggling. After opening the 2011 season with an impressive 9-6 record in nonconference play, the women's tennis team dropped all seven of its Ivy contests, finishing the spring season with a disappointing 9-13 overall record.

Just two years later, few would have expected the Light Blue to be sitting atop the Ivy League midway through conference play. But with the addition of several on-court leaders and plenty of hard work, the Lions have become one of the Ancient Eight's most formidable crews.

From 2007 to 2011, Columbia never broke .500 in its overall record. During this five-season span, the Lions won just two of their 35 Ivy matches, taking last place in the Ivy League each year.

But over the last two seasons, the program has taken enormous strides, with players like senior Nicole Bartnik and junior Bianca Sanon leading the Lions from perennial cellar-dwellers to serious contenders. Columbia earned its first ever top-50 national ranking in March—the team is now ranked No. 56—and it has now begun the 2013 season 3-0 in conference play.

The upward climb began to pay dividends last season, as the Light Blue went 13-6 overall and 4-3 in Ivy play—both record finishes for the program. Bartnik, who posted an undefeated record in first singles, was unanimously declared the 2012 Ivy League Player of the Year. Sanon and junior Tiana Takenaga were named second-team All-Ivy for singles and doubles, respectively, last season.

This season looked promising for the Lions, who entered play ranked No. 73 in the country.

So far, the Lions have met the high expectations, starting with unprecedented success during the nonconference season. They defeated their highest-ranked opponent in school history with a mid-February victory over No. 42 Kansas State. After defeating Akron the following weekend, the Lions moved up to No. 46 in the nation.

In their Ivy opener on March 30, the Lions blanked previously undefeated Cornell, 7-0, on the Big Red's home court in Ithaca. Last Friday, Columbia topped Harvard, 4-3, for the first time in 20 years, marking the Lions' second victory over the Crimson in program history. The team completed its weekend sweep with its 7-0 shutout of Dartmouth at the Dick Savitt Tennis Center.

"What's exciting is that for the first time in the history of the program, we're in contention to win a title," Weintraub said.

After this weekend's sweep, the Lions stand 10-4 overall and 3-0 in Ivy play. With just four games left in the Ivy season, Columbia is currently tied with Yale for first place in the conference—a far cry from the team's winless, last-place finish just two seasons ago.

Bartnik, who has competed in first singles since she stepped foot on campus, has played an instrumental role in the Light Blue's turnaround over the last few seasons, and 2013 has been no different. Her highlights include victories in the first three Ivy matches and a decisive triumph in a three-set tiebreaker against Cornell's Sarah O'Neil in the Lions' Ivy opener.

"Nikki defines this program's success," Weintraub said, describing Bartnik as "the heart of the team."

"She came in four years ago, and she was the start of this culture, the turnaround," Weintraub added.

Along with a strong leader in Bartnik, the depth of Columbia's roster has contributed to the Light Blue's success so far this season.

"Everybody at different points in the season has come out and stepped up to the plate and really performed under pressure well, so we know that we can count on everybody on the team," Bartnik said.

The first doubles duo of Sanon and Vaidya, ranked No. 38 in the country, has shone for the Light Blue. The pair holds a 7-0 record for the season.

"They have a very good chemistry on court," Weintraub said. "Kanika needed someone that was quick at the net and had good hands. Because Kanika is so strong from the baseline, she is really able to set Bianca up well from the net."

Weintraub also cited the team's dedication in off-season workouts and tournaments as one of the factors responsible for its success.

"We always have the goal of being the fittest team in league, and I think we've reached that goal," Weintraub said. "And that helps us prevail in these close matches."

Although the Lions have a chance to go from the bottom to the top of the Ivy League in just two seasons, they haven't gotten ahead of themselves.

"I think it's really important to take things one match at a time," Weintraub said.

The team's road to an Ivy crown will certainly feature close contests, as the Light Blue will face Brown, Yale, Penn, and Princeton in the next few weeks. The 13-2 Yale Bulldogs and 10-5 Princeton Tigers, in particular, may pose challenges for the Lions.

But if the team continues to play like it has, women's tennis could very well be bringing some hardware to Morningside Heights at season's end.