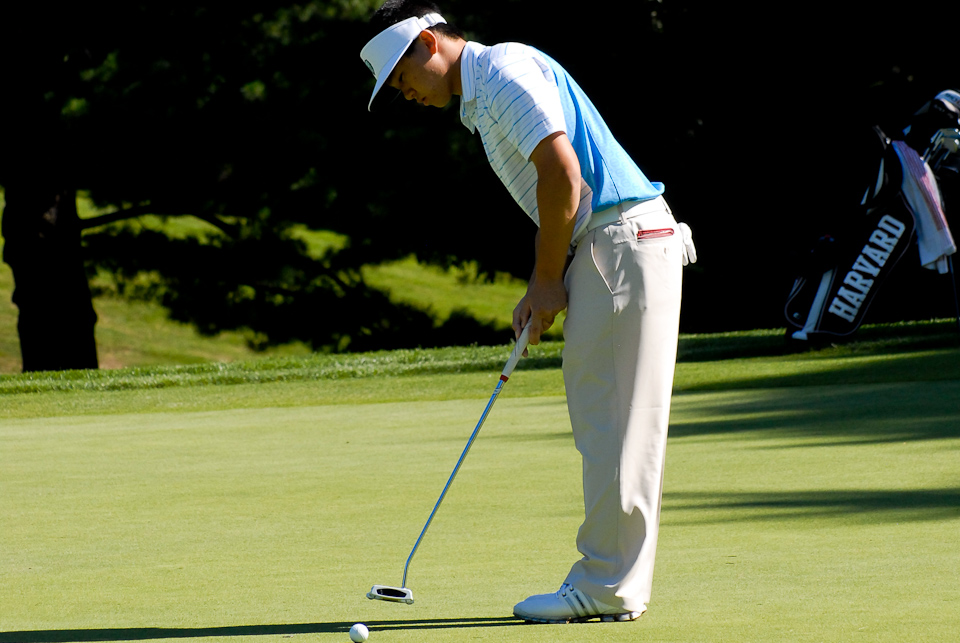 Freshman Harrison Shih will look to continue his strong play at the Princeton Invitational.

MEN'S HEAVYWEIGHT ROWING
Coming off a successful outing at the Alumni Cup last Saturday in Worcester, Mass., the heavyweight men's rowing team will return to its home waters at Overpeck County Park. The Light Blue will be rowing against Ivy foes Princeton and Penn in the Childs Cup. The Tigers, like the Lions, have had a strong season thus far, defeating Georgetown, Navy, and Syracuse in their first two weeks of competition. The Quakers have defeated MIT and Mercyhurst, and they came in third in the Matthews & Leonard Cup, losing to Harvard and Cornell. The action commences Saturday at 9 a.m.

MEN'S LIGHTWEIGHT ROWING
After a weekend that included a pair of road victories against Navy and Delaware, the lightweight rowing team will travel to Pennsylvania for its first showdown against other Ivy League teams. The Lions will be rowing against Penn and Yale in the Dodge Cup, in what should prove to be an exciting day of competition. Penn, Yale, and Columbia have all had strong showings this season, but they have yet to step into competitions that feature Ivy League opponents. The crews will hit the water at 10 a.m. on Saturday.

WOMEN'S GOLF
The women's golf team will host the Seventh Annual Roar-EE Invitational on Friday at Spook Rock Golf Course in Suffern, N.Y. As the Lions prepare to compete this weekend, they are poised to fare well against Ivy League competitors Penn and Dartmouth. Penn is the only previous champion in the competition this year, but the Lions beat the Quakers three weeks ago at the C&F Bank Intercollegiate.

Columbia has previously dominated individual competitions at the invitational. Then-senior Nancy Shon won the Roar-EE Invitational in 2010, and current junior Michelle Piyapattra won back-to-back titles in 2011 and 2012. Although the Lions have not faced Dartmouth this season, the Lions are ranked fourth in the league—two spots above the Big Green. The Lions will also face Boston University, Central Connecticut State, Hofstra, LIU Brooklyn, Quinnipiac, Siena, and Wagner.

MEN'S GOLF
After a strong seventh-place showing at the Yale Invitational, the men's golf team will have another opportunity to dominate at the Princeton Invitational at Springdale Golf Club on Saturday and Sunday. The event consists of a 36-hole event on Saturday and an 18-hole final round on Sunday. Last year, the Lions had an impressive third-place showing at the invitational, finishing just two points behind the winner, Yale. Sophomore Brandon Jowers could continue his shot streak after posting a career-high fourth-place finish at the Yale Invitational.