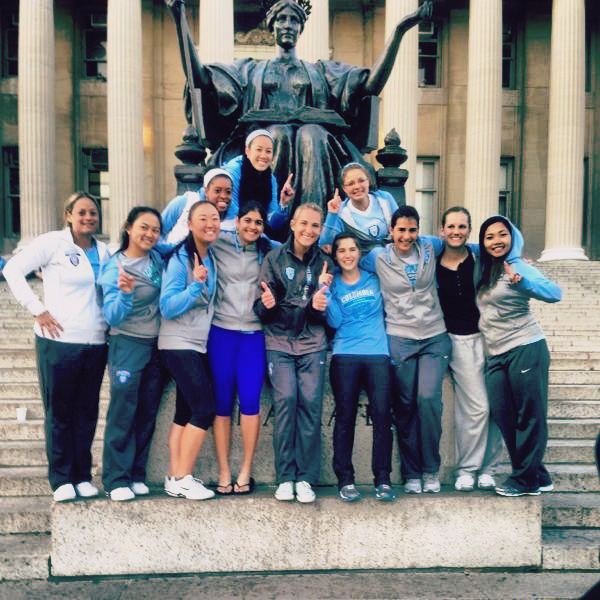 Womens tennis is assured at least a share of the Ivy title after compiling a 6-1 record in the Ancient Eight.

The journey from the bottom to the top is complete for women's tennis, as the team has captured at least a share of the Ivy title for the first time in program history.

The No. 65 Lions (13-5, 6-1 Ivy) concluded regular season play with decisive victories over Penn and Princeton on Friday and Sunday, respectively. The good news came Sunday evening when Yale (15-3, 5-1 Ivy) dropped its half-game lead on the Lions for first place in the Ivy League by falling 5-2 to Harvard. Yale and Columbia are sitting on one loss each, and the Bulldogs have one more match next week against Brown, meaning that the Lions will finish no worse than tied for first place in the Ancient Eight.

"In our first meeting of the year, I told the team that we had one and only goal and that was to win the title," head coach Ilene Weintraub, CC '02, said. "That was the first and last time I ever talked about it or allowed them to speak of it. Instead, we focused on the process and on the little things."

Regardless of whether they end up sharing the title or owning it outright, the Lions are ecstatic about their first Ivy title win in program history. Seniors Nicole Bartnik and Katarina Kovacevic—the only two graduating players—are particularly thrilled.

"It feels amazing," Bartnik said. "This is something we've obviously been working on since we got here and started on the team."

This season, the Lions went 6-1 in conference play—their best finish in program history. Bartnik has proved instrumental during conference play for the past few seasons, winning all of her conference singles matches the last two years.

"This year, everyone was on the same page and was putting in 100 percent every day—every time they stepped on the court, or every time they went to the weight room," Bartnik said. "It just feels so great to have all your hard work pay off."

Weintraub credited the team's upperclassmen for helping change the culture of the program.

"They were instrumental in holding each other accountable and helped everyone become the best versions of themselves," she said.

The Lions had a stellar weekend on the court, winning every completed match. On Friday afternoon, the Lions easily topped the Quakers 4-0 in their final road contest of the regular season. In first doubles, the Light Blue pair of junior Bianca Sanon and freshman Kanika Vaidya, ranked No. 48 in the country, defeated Penn's No. 44 duo of Sol Eskenazi and Sonya Latycheva, the highest ranked doubles pair in the Ivy League, by a score of 8-5. Likewise, Bartnik and sophomore Crystal Leung handily sunk Stephanie Do and Alex Ion 8-3 in second doubles.

The Lions remained hot in singles play. Sanon dominated Do 6-0, 6-1 in second singles, while junior Ioana Alecsiu pounded Katherine Jania 6-1, 6-1 in sixth singles. Vaidya, playing third singles, then clinched the victory for the Light Blue. She jumped to an early lead, blanking Latycheva 6-0 in the first set before claiming the Light Blue's final win with her 7-5 victory in the second set.

On Sunday—Senior Day—the Lions maintained their spotless 7-0 home record with a 7-0 win over Princeton on Senior Day. They earned the doubles point with victories from Bartnik and Leung in second doubles and from Alecsiu and junior Tiana Takenaga in third doubles. The first doubles pair of Sanon and Vaidya did not finish but was ahead when Alecsiu and Takenaga clinched the doubles point.

Either way, earning a share of the Ivy title represents a landmark accomplishment for the Light Blue.

In that first meeting of the year, Weintraub told her team "that it would require tremendous sacrifice on their part and when it happens in the end, then we would celebrate. Today is that day."