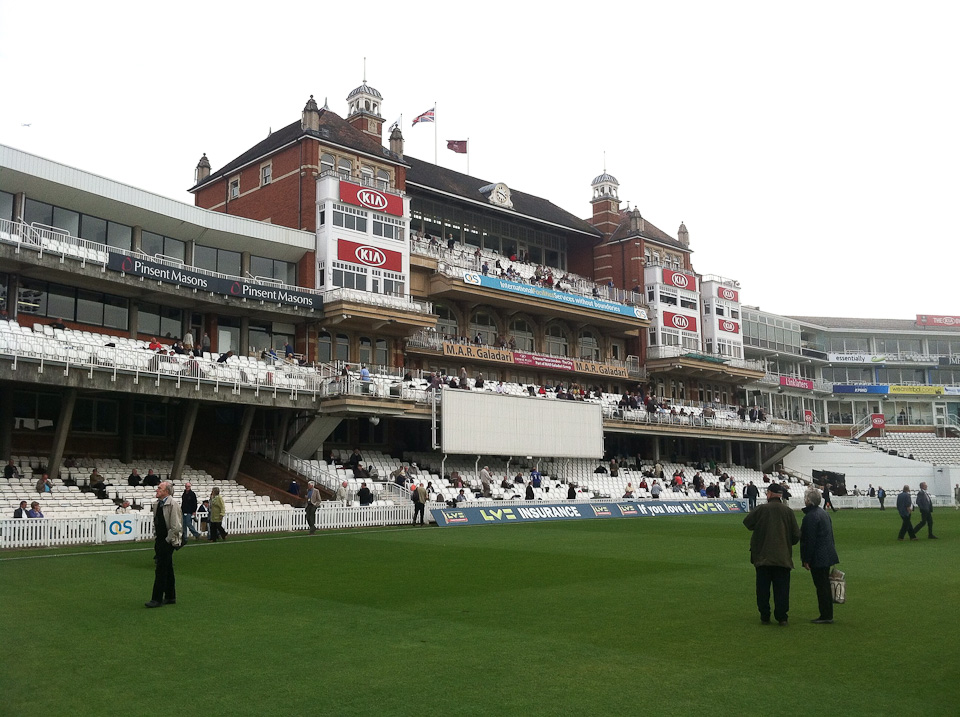 When you start dating someone, it might take a while for you to bring up some of the uncomfortable facts about your past. Maybe you conceal that you voted for Mitt Romney, or used to cheer for the Mets, or once joined the Cornell marching band. For my dad, it took nearly six months before he could admit to my mom the most embarrassing tidbit from his past at Haverford College: He had been the captain of the school's cricket team.

Cricket is not popular in the United States. For my last column here in London, I set out to try to figure out what the appeal of this sport actually is.

The home stadium of Surrey County Cricket Club (called "The Oval") is located a brisk 25-minute walk from my home base in southeast London, so I wandered over there around noon last Wednesday. The nickname should be taken literally—the playing surface is a grass oval, roughly the size of a baseball field, with a knotted rope around the border. Surrounding the field were, obviously, a whole bunch of seats, about 95 percent of which were unoccupied. The most densely populated area of the stadium was an edifice that looked a lot like Hogwarts and was populated entirely by coat-and-tie-wearing British people. It turns out that this was the "club" area, where everything was fancy and mere peons like myself were not allowed to tread.

Undaunted, I settled in to a seat in the bleacher area. It was a beautiful day. Most of the folks around me had settled in with a drink, a newspaper, and a floppy hat.

The general rules of cricket, as I have surmised, are basically this: Both teams have eleven dudes. One team sends two dudes out on the field armed with heavy bats. They stand in front of the "wickets" which are two sets of three wooden poles in the ground, about 60 feet apart from one another. The other team fans their eleven dudes out around the oval. One of those guys gets a sprinting head start and then chucks ("bowls") the ball at one set of wickets.

This all sounds rather exciting. In practice, what happens next is very anticlimactic. The batter smacks the ball with his bat, and then the ball scoots off in one direction or another. Sometimes, the ball goes far enough that the two batsmen run from one wicket to another, scoring a run. If they hit the ball over the rope boundary, it's four runs.

The game, such as it is, settled into a peaceful rhythm: Ball thrown, hard thwack, ball rolls around, sometimes there's some light running. The sun kept us nice and warm in the stands, and I busied myself with a book about the history of soccer tactics. (Something I might need to keep away from future love interests.) I was, rather unbelievably, enjoying myself when suddenly everyone walked off the field and up to the clubhouse. It was teatime, which necessitated a 30-minute break in the action. They did, however, let us actually go on the field while this was happening. As I stood around, aimlessly, I felt that I was getting the true cricket experience.

It turns out that it's really hard to make an out in cricket. The most common is when an opposing fielder catches the ball, on the fly. Sounds easy enough, but the ball is hard, flies fast and low, and fielders don't have any gloves. They also stand about 10 feet away from the batter, meaning that sometimes the only way to catch the ball is with ninja reflexes.

Once your team has made 10 outs, the other team gets to bat. I was there for five hours: Three outs were made, and on exactly zero of these occasions did I see what had happened. Once you're out, you trudge sadly back to the clubhouse where, presumably, you console yourself with crumpets, while the opposing team celebrates like they just won the World Series.

By 5 p.m., the sun had retreated in the face of traditional British clouds, and I was woefully underdressed for the 10-degree drop in temperatures. As I biked home, I noticed that my arms were still a bright red—I had gotten a sunburn in England, something about as rare as, well, an out in a cricket match.

My editors would usually tell me here that columns should have some relevancy to the Columbia community. So I will simply close by saying this: Though it's a goofy sport in a lot of ways, cricket is a really nice way to spend an afternoon. And, in a social culture too often revolving around stress and anxiety, I think the best thing we can do is to stop playing all other sports, turn the South Lawns into one huge oval, and start a yearlong match of cricket.

At the very least, it'll give you a silly story for your future kids.