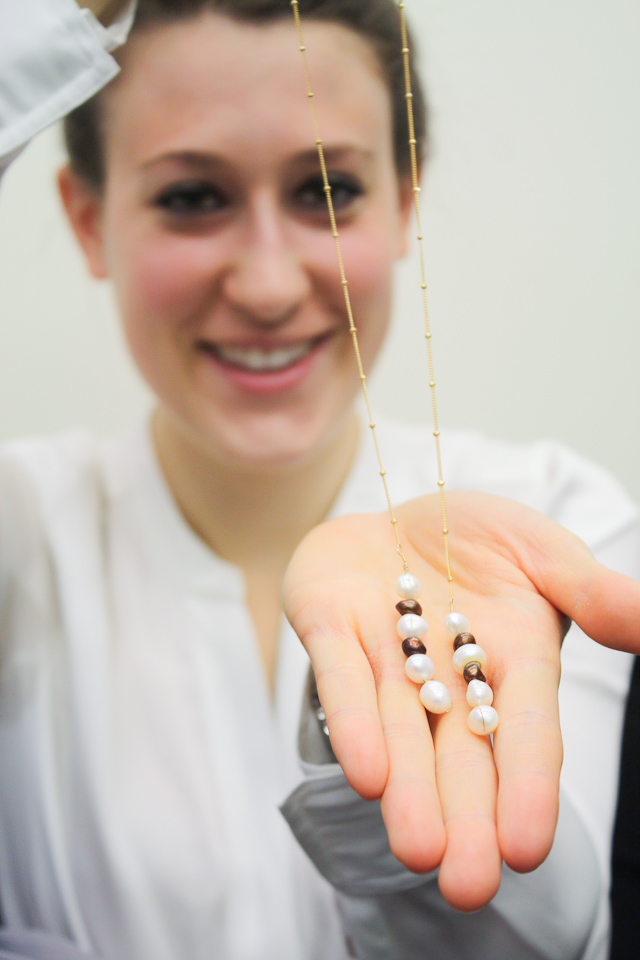 Shelby Layne, BC '13, started an online jewelry marketplace whose proceeds benefit a charity for women in Darfur.

Jewelry lovers can shop to their heart's content without any sense of buyer's remorse thanks to a new website created by Shelby Layne, BC '13.

As part of her Social Action Project, SBL Jewelry—which stands for "Save, Build, Live," as well as her initials—Layne launched a business that collects, makes, and sells fine jewelry and donates all of its proceeds to the Solar Cooker Project, the anti-rape charity of Jewish World Watch, a nonprofit organization dedicated to fighting genocide.

To dive into the world of e-commerce, Layne began conceptualizing her site in January, launching it on April 6. Since then, she has received over 40 pieces of donated jewelry and has raised $1,000 for the charity.

"When I originally learned about the project and the fact that $40 would help provide two solar cookers in order to keep women and girls under the protection of Darfur refugee camps, obviating their need to leave the protection of the camps to collect firewood, I realized how such a small amount of money could have such a large impact," she said.

Solar cookers allow women to remain in their camps, reducing their risk of being raped or beaten, as well as decreasing their vulnerability to firewood burns and smoke inhalation.

"While the main focus is rape prevention, this project has so many benefits to help support women in these really difficult situations in refugee camps," Layne said.

Women are also hired to manufacture the solar cookers, which provide them with a livelihood, while young girls—who would otherwise spend hours trekking to find firewood—may now stay in the camps and receive an education.

Layne's involvement with the Solar Cooker Project began long before joining the Athena Scholar Program. At age 15, her father mentioned the charity at the dinner table.

After contacting the organization for ways to get involved, Layne realized that she could apply her jewelry-making skills to sell handmade pieces for charity. She went on to found SBL Jewelry and partnered with local shopkeepers in her native Los Angeles to sell the pieces, which she either made or collected from family and friends.

Layne made her first sale in September 2006 and continued to grow her business through an increasing network of buyers and donors, who received tax deductions for their jewelry donations.

Between her first sale and her high school graduation, Layne collected $100,000 for the cause, which provided about 500 solar cookers to women in refugee camps.

She also received $4,000 in grants to help fund her expansion.

During college, Layne continued making, collecting, and selling the jewelry whenever she found herself at home in Los Angeles. So when it came time for her Athena Social Action Project, Layne jumped in "full steam ahead," according to Director of the Athena Center for Leadership Studies Kathryn Kolbert.

The Athena Social Action Project is a requirement for all seniors in the multi-year Athena Scholars Program. As part of the senior seminar, they design and then lead an endeavor of their choosing, while getting support and input from their peers and the Athena community in launching it during the term.

Since she plans to go into finance after graduation, Layne hopes that her leadership skills will help her to advance her business and continue contributing to this important cause.

"I'm excited to see where it goes," she said. "It's been a really interesting journey."