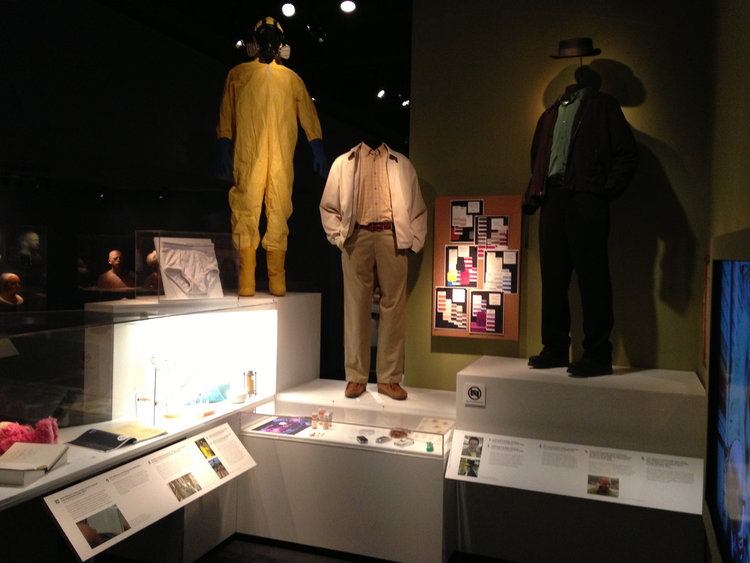 Courtesy of Museum of the Moving Image

When "Breaking Bad" creator Vince Gilligan first pitched the Emmy-winning series to TV executives, he described it as "the story about a man who transforms himself from Mr. Chips into Scarface." A new exhibit at the Museum of the Moving Image picks up on Gilligan's cue by tracing the character development of the show's antihero, Walter White, from family man and high school chemistry teacher to methamphetamine kingpin. Packing costumes, props, and clips from the AMC drama into a small space, "From Mr. Chips to Scarface: Walter White's Transformation in Breaking Bad" explores the complex role that earned Bryan Cranston three consecutive Emmys for Best Actor.

What the exhibit lacks in square footage, it makes up for in badassery. The display cases are treasure chests for "Breaking Bad" aficionados, containing key props from the series' five-season run, including the two cell phones Walt uses to juggle his double-life, Walt's lab equipment, two bags of his signature blue meth, his inscribed copy of "Leaves of Grass" (a gift from his lab assistant, Gale Boetticher), and the infamous boxcutter and ricin tube. The cases house other vestiges of the macabre Albuquerque, N.M. home that its characters inhabit, including the dismembered pink teddy bear from season three and Gale's lab notebook, which—spoiler!—is an essential piece of evidence in the DEA's investigation of his murder.

But the items that carry less of a shock value speak more powerfully to Walt's character arc. Innocent pastel portraits of Walt, his wife, Skyler, and his son, Walt Jr., hang on the wall as reminders of his initial motivation for getting into the drug business—after Walt's diagnosis of inoperable lung cancer, he decides to start cooking meth in order to insure his family's financial future.

The three costumes in the exhibit, which represent Walt's different personas throughout the series, track his transformation better than any of the props. Walt's nice-guy khaki wardrobe heralds back to the series' early days, while the yellow Tyvek suit he wears to cook industrial amounts of meth and the fedora-topped outfit of Heisenberg—his drug lord alter ego—hurls the viewer back into Walt's precarious present.

Of course, the exhibit also makes use of the show's own medium—video—to animate Walt's devolution, and its success relies on this multimedia format. A reel of 11 clips from the show that feature Walt's diagnosis, his offer to partner with a former student, the first time he cooked meth, his sinister "I am the one who knocks" monologue, and the phone call after the murder of his boss, Gus Fring, offers a fairly comprehensive overview of Walt's tailspin into total depravity. Meanwhile, a telling compilation of interviews with Gilligan and some of the show's actors reveals exclusive insight into Cranston's character.

"From Mr. Chips to Scarface" manages to move past its own walls by echoing its surroundings. Located across the hall from a hair and makeup display featuring Robert DeNiro's mohawk wig for "Taxi Driver" and photographs of Orson Welles getting made-over to look elderly for "Citizen Kane," the exhibit mirrors other famous characters that undergo dramatic physical and moral metamorphoses. Intentionally or not, the space also nods to "Scarface" star Al Pacino, as his lifemask for "The Godfather Part III"—a plaster of Paris mold of the actor's head that was used to design prosthetics and wigs—is on the same wall as the exhibit. (Aside from figuring into Gilligan's pitch, "Scarface" re-enters the show in the first half of the fifth season, when Walt ends up watching the gangster classic with his infant daughter on his lap.)

While the exhibit doesn't indicate a happy ending for Walt, visitors will have to wait for the Aug. 11 premiere of the second half of the fifth season for the final word. Until then, "From Mr. Chips to Scarface" might give fans their fix, but it will probably keep them coming back for more.

"From Mr. Chips to Scarface" runs until Oct. 27 at the Museum of the Moving Image, located at 36-01 35 Avenue in Astoria. To get to the museum, take the M or R to Steinway Street. Tickets are $9 with a valid student ID.