In changing Harlem, an opportunity for Morgan

In changing Harlem, an opportunity for Morgan 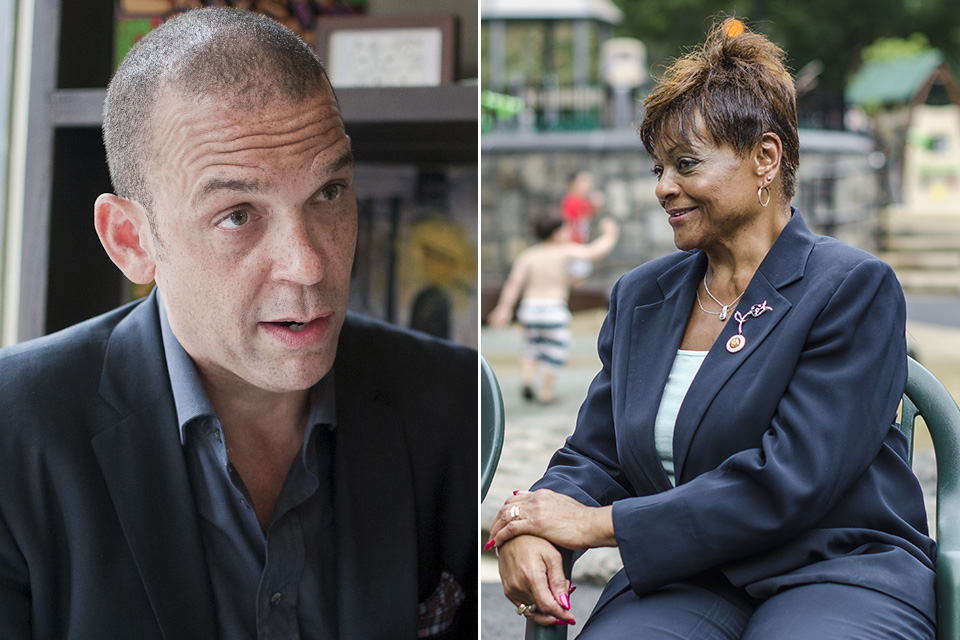 In Harlems District 9, community banker Vince Morgan is giving City Council member Inez Dickens a run for her money, but Dickens has the strength of the Harlem political establishment, unions, and business groups behind her.

In New York City Council campaigns, incumbents usually waltz to victory, and most incumbents facing Democratic primary elections on Tuesday are expected to do just that.

But in Harlem's District 9, community banker Vince Morgan is giving City Council member Inez Dickens a run for her money, gaining traction with major endorsements and an aggressive campaign.

Morgan, SIPA '06, is also taking advantage of demographic changes in the neighborhood and a scandal that hit Dickens over her real estate business this summer.

"This is a critical juncture in Harlem's history," Morgan said in an interview. "I'm the first candidate who has a legitimate shot at beating an incumbent in Harlem" in years, he said.

But Dickens, a contender to be the next City Council speaker, is well-known in the district, and has the strength of the Harlem political establishment, unions, and business groups behind her.

"We are focused on talking to voters and are confident they will re-elect CM Dickens, who they know and trust," Dickens spokesperson Violet Moss said in an email.

Dickens staff did not respond to multiple interview requests over the last week, and Moss said Dickens was not available for an interview Wednesday or Thursday.

Both candidates cite issues like job creation and affordable housing as crucial issues for the neighborhood. Morgan has also made his opposition to Columbia's Manhattanville expansion a centerpiece of his campaign. Dickens voted for the plan in the City Council, and Morgan has been one of its loudest critics—he says the University should be giving more contracts to local and minority workers.

And while the expansion is outside the district lines, Morgan said it was typical of development in Harlem.

"You cannot have outsiders coming in and building without having an enforceable component for having local people in jobs and contracts," he said. He called for requiring all developers who get benefits from the city to award a minimum of 20 percent of contracts to minority businesses.

Moss cited passing "the living wage legislation that provides better pay for working New Yorkers" as one of Dickens' proudest legislative achievements. The law requires developers who accept more than $1 million in taxpayer subsidies to pay their workers a higher minimum wage.

"The safety and sanitation of where someone lives is very important," Morgan said. "To have an elected representative who obviously doesn't take those issues seriously really speaks to her character."

Moss said that Dickens "has no role" in the real estate company she co-owns, which is run by her sister, and that the company "has taken active steps to address issues at the buildings."

Dickens also got press when she hired David Johnson, an ex-aide to former Gov. David Paterson, last month. Johnson pleaded guilty to second-degree harassment in 2009 for beating up his girlfriend—a scandal that heavily scarred the Paterson administration.

"That track record of behavior with women is a problem with me," Morgan said.

Moss said that Dickens "believes in second chances" and added that ministers and other community leaders supported Johnson, who is working on Dickens' campaign.

Ongoing demographic and socioeconomic change in Harlem could also give Morgan a lift. The longtime African-American heart of New York, Harlem has seen a sharp increase in its white and Hispanic population over the last few years.

While Morgan said his supporters "are not new people in the community," he said he thought he had an advantage with "the wider, very diverse population of people that have different ethnic backgrounds ... that are all a part of the fiber of what Harlem has always been."

Harlem's growing demographic groups are reflected in Morgan's endorsements, including Hispanic political leader State Sen. Adriano Espaillat. He also has the backing of a number of new-guard businesses in the area. Those businesses include the Astor Row Café, a coffee shop that opened on 130th Street and Lenox Avenue last year, where he suggested the interview be held. As he spoke, he taped campaign signs to the inside of a window in the café, which sports trendy décor and serves $4 hibiscus tea.

Dickens, meanwhile, has the strong support of Harlem's old political guard, including Rep. Charles Rangel, who has called her his "political wife"; former Gov. David Paterson; and Assembly member Keith Wright. She also has the backing of a political action committee bankrolled by the Real Estate Board of New York and major unions like 1199SEIU and the United Federation of Teachers.

But Morgan said Dickens was "dependent" on Rangel's Harlem political organization and club, which he said has "proven itself to be weaker," citing the congressman's near loss to Espaillat in his re-election campaign last year.

Morgan's campaign has also benefited by an endorsement from Public Advocate Bill de Blasio, the mayoral frontrunner. It's the only endorsement in the Democratic primary that a mayoral candidate has given to someone running against a sitting City Council member. Comptroller Bill Thompson and City Council Speaker Christine Quinn, two other mayoral candidates, are backing Dickens.

On election day Tuesday, especially in a low-turnout City Council primary, the candidates' get-out-the-vote operations may play an outsized role.

Morgan said his staff has been knocking on doors since May and that he would have over 100 people helping him get the vote to the polls next week—as well as organizational help from de Blasio's campaign.

"Our operations will be merged together uptown, and it will be very focused," Morgan said.

"My gut is that Inez is going to win because of the club support and the institutional support," he said. "She has the name recognition."

But he said Morgan would likely "do better than most people expect because he has been building his name in the community for the last few years."

"A younger generation in Harlem wants a change," he said. "They are not tied to Democratic clubs or unions that support particular candidates. They are more open to be persuaded."