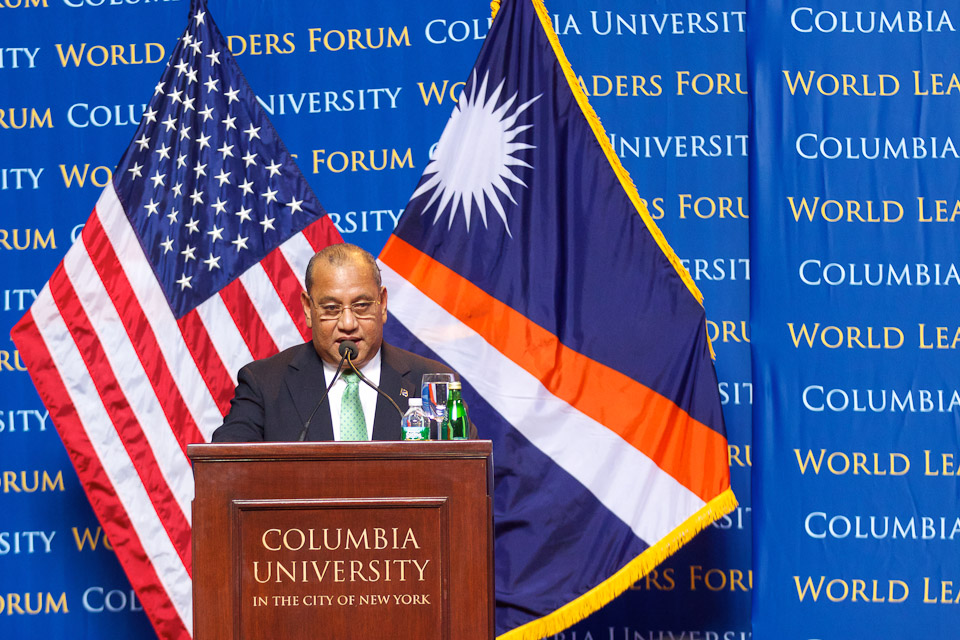 "There is no more important response than leadership—not in words but in actions, not in promises but in commitments, not in delay but in doing what is right, and doing it now," Loeak said.

At a World Leaders Forum event Wednesday, Loeak spoke of his country's efforts to lead by example in addressing the immediate threat of global climate change. The Marshall Islands, a confederation of over 1,000 islands in the Pacific Ocean located 2,400 miles southwest of Hawaii, is one of only four coral atoll nations in the world and sits at an average of only two meters above sea level. This makes it uniquely vulnerable to climate change, with the dual hazard of rising seas and ocean acidification threatening to submerge the nation—and with it, a way of life.

"For some, climate change is an important part of the issue—but one of many and distant threats," Loeak said. "In the Marshall Islands, climate change has already arrived."

This emergency entered a critical stage last spring, when Loeak declared a state of disaster during a drought that left more than 6,000 people surviving on less than a liter of water per day. Six weeks later, a king tide crashed over the seawalls of the capital city of Majuro, flooding the airport tarmac and many urban residences, including Loeak's own home.

"Our islands is who we are—not just our culture, but our personal identity," Loeak said, stating that the majority of Marshallese, himself included, would go down with the islands should they flood completely rather than abandon their home country.

Loeak stressed, however, that Marshallese and other Pacific Island leaders are still hopeful for a global solution to this problem.

"While countries like mine will be the first to go, we are only the front line. No country is immune. We must take up greater responsibility, governments and citizens alike, to win this war. It is a war for nothing less than the future of humanity. It will take every one of us," he said.

Loeak spoke of the efforts of the Marshall Islands to reduce its carbon footprint by switching from imported fossil fuels to sustainable energy sources, such as solar panels. "It is my hope and my intentions that every house, school, clinic, and dispensary will be completely powered by the clean and natural energy of the sun," he said.

Other Pacific Island nations have followed the example of the Marshall Islands, with Tuvalu setting the goal of exclusively relying on sustainable energy by 2020.

Sean Brennan, CC '17, said he was excited to hear about the Marshall Islands' active role in bringing sustainability issues to the forefront of the global agenda.

"I became interested in the effect of climate change on small island nations after watching a documentary last summer about the Maldives," he said. "Since their president has since been overthrown, it's encouraging to hear that President Loeak is getting the declaration around and having other countries sign onto it."

Leslie Faulkner, GSAS '14 and a sustainability management student at the Earth Institute, said she appreciated how the event humanized climate change.

"We study facts and scientific evidence, but it's important also to hear what the human aspect of the effects are, and to hear from a world leader is very compelling," she said.

Benjamin Dean, SIPA '14, who is from Australia, said the event gave him "some food for thought" about his own national government's stand on climate change.

"It's very sad to see such a rich Pacific island turning their back ... while you have small Pacific islands, like the Marshall Islands, which depend on foreign aid, doing what they can and taking the lead," he said.