After policy change, more students must be signed in

After policy change, more students must be signed in 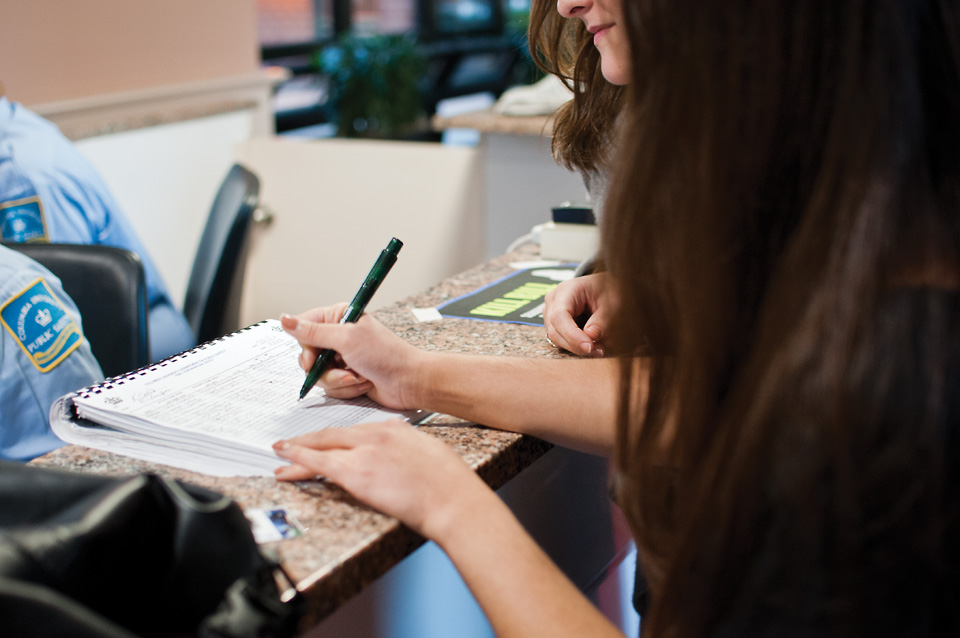 Students signing in at East Campus residence hall. Long lines to sign in are expected to continue.

Students attempting to sign in to the East Campus residence hall this weekend will likely continue to face long lines and annoyed guards, a problem that has only been exacerbated this semester by the expanded number of students who need to be signed in.

As Bwog and the Lion initially reported, the Office of Residential Programs changed the housing policy over the summer so that any student without a campus housing assignment is now classified as a guest.

In the past, commuters could fill out a form to gain swipe access to residence halls, so that they could visit friends' rooms and attend events just like any other student in Columbia College and the School of Engineering and Applied Sciences.

However, this year when students returned for the fall semester, that form did not exist. Instead, the Guide to Living now states, "any student who does not have a current assignment in Columbia undergraduate housing is considered a guest."

This change has especially come as a surprise to students living in nearby non-Columbia owned buildings, such as the Beta Theta Pi brownstone and the Bayit—a Jewish co-op that hosts Columbia students from various colleges.

Orly Michaeli, CC '14, who lives in the Bayit, said she has filled out the Commuter Access Form since her sophomore year and didn't realize this semester would be different.

"The whole debacle with swipe access is like, you kind of don't realize how much you use it until it's gone," she said. "This year, I went online, and the form wasn't there. I was confused, and I emailed the housing office. They basically told me that commuter access was no longer something they allowed."

Assistant Dean for Community Development and Residential Programs Cristen Kromm said that the policy change was made in order to be consistent with how the school treats General Studies, Jewish Theological Seminary, Barnard College, and graduate students. None of these students receive swipe access to residence halls, she said, for reasons including safety, security, and access to amenities paid for by residents who elect to live in Columbia undergraduate housing.

However, many students have questioned why they were not told prior to choosing housing or at least before moving in this fall. Some have also raised concerns about whether the policy being consistent for those in CC, SEAS, and Barnard makes sense.

Kromm said that although Residential Programs typically makes changes to its policies over the summer, she is open to looking at other ways to notify students in the future.

"One of the things they've said is, We're doing this policy to make it more consistent across all Columbia schools.' We're CC and SEAS undergrads. Those housing facilities don't house Barnard, don't house GS—they house CC and SEAS undergrads," said Isaac Bunch, CC '14 and president of Beta Theta Pi, which is the only fraternity to own its own brownstone. "Barnard pays separate student life fees. The fees are separate, and we can't swipe into Barnard dorms. I don't pay fees to Barnard."

But as Bunch pointed out, he still paid the $1,500 student life fee this year, just as students living on campus did.

"Printers, treadmills, pianos, lounge spaces, these are things you are paying for in your student life fees," he said. "It doesn't make much sense to me that these fees are the same when we're clearly not getting access to the same facilities."

Beyond questions about paying for the facilities in residence halls, some students have questioned the need for extra security measures for students who simply choose not to live on campus. Members of the Engineering Student Council and Columbia College Student Council are meeting with Residential Programs on Friday to discuss the policy.

For her part, Kromm maintains that insurance and security issues were not the impetus for the policy change, but simply consistency.

For Bunch, the loss of swipe access also makes practicing music for his classes more difficult.

"We have our jazz practice room in Carman, which I'm supposed to be getting swipe access to, but it hasn't worked out yet," he said. "I'm in a jazz arranging class this semester—I need access to a piano. I feel like I'm paying money to go to an Ivy League school, I should be able to play a grand piano."

Other students felt that while they understood some of the administrators' concerns, they didn't think students wanted swipe access to take advantage of the facilities.

"I have yet to feel the need to crash dorm facilities. Practically, I just don't think people have the time or energy to do that. It takes just as much energy to crash a dorm as it does to walk down the street and use the laundromat," Lauren Beck, GS '14, who lives in a studio at 106th Street and West End Avenue, said.

While Beck lives off campus, she is still involved in multiple groups on campus and says that needing to be signed in can cause difficulties when visiting friends. In recent weeks, students have complained about waits as long as an hour to get into popular residence halls on weekends.

"I'm just that friend who always has to call someone and has to have someone sign me in, which is fine. It's frustrating, but it's not the end of the world," Beck said. "There's already a lack of community in Columbia, and I don't think this fosters community. I think it breaks people into groups and divides them."

In terms of addressing the growing lines to sign in to EC and other high-traffic residence halls, Kromm said that Residential Programs and Public Safety are exploring other sign-in processes that might alleviate some of the current problems. And administrators are also making other practical reforms.

"There is now a bathroom in the lobby of John Jay Hall for visitors dining in John Jay or JJ's Place. The front desk of Schapiro Hall was relocated so that recognized groups can host events in the Schapiro main lounge and the Wien main lounge without submitting a guest list," Kromm said.

While Bunch said he understands the administration's desire not to expand swipe access to all students, he believes the change has created unnecessary inconveniences.

"I guess the security concern can be valid if the swipe-ins were University-wide. You can have people in GS who are 70 years old and don't necessarily have business going into CC or SEAS dorms," Bunch said.

In addition, Bunch added, the lack of swipe access has had a negative effect on Beta's ability to recruit new members this semester.

"We had a very hard time with recruitment this year because our senior leadership couldn't get into any of the residence halls," he said, adding that sign in requirements have "split the brotherhood a bit."

While needing to be signed in is new for CC and SEAS students, the inconvenience is something that Barnard and GS students have always dealt with. Students have tried to campaign to change this rule in the past, but administrators say this won't happen.

Although administrators are not reconsidering the policy for any students, Kromm said she and other administrators recognize that the change has caused inconveniences for students. Still, they believe security is a top priority and hope to work towards a solution to ease the sign-in process as soon as possible.

Whether these measures will pacify students remains to be seen.

"We chose to come to Columbia because we wanted an integrated campus community, not to be in these isolated buildings like NYU," Bunch said. The policy "sent me the message that I'm not valued member of the community, that I'm a security threat somehow, even though I have nothing on my disciplinary record to show that."