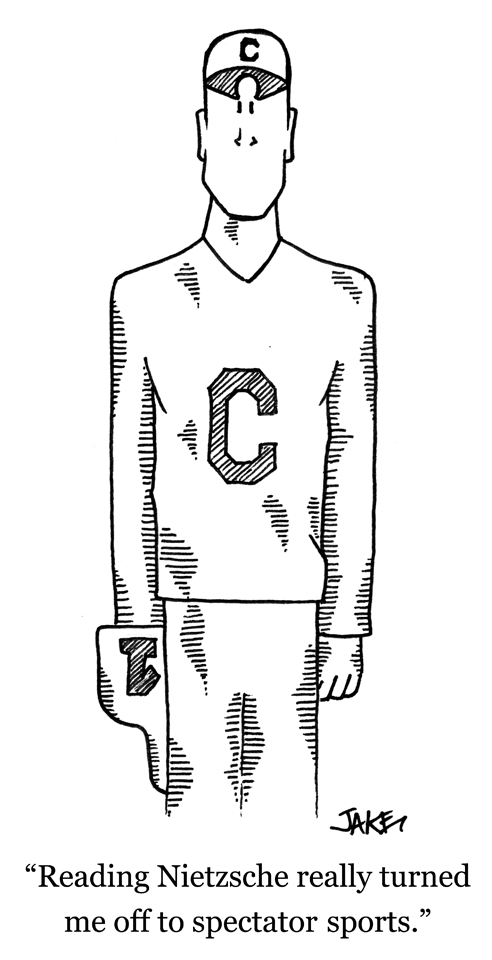 A friend of mine suggested at dinner that we each donate $20.14 to the senior fund. He was met with a series of rebuffs from around the table: gibes about the cost of tuition, gripes with the administration, and a few well-argued critiques of the University. Maybe the one-cent increase from last year was more than we could bear, but this wariness of the institution has come to be a trademark of Columbia students. What we lack in spirit we make up for in criticism, and for most of this country, tailgating is a lot sexier than protesting endowment investment in Big Oil. Our hesitance to cheer and our inclination to condemn leads some to believe that we don't like Columbia.

Let me set the record straight. We like it here. We came here because we were interested in thinking for ourselves instead of partaking in the worship of athletic teams that has somehow hijacked the identity of the best post-secondary educational system in the history of the known universe. Intellectual discomfort is the cornerstone of this institution. Every class is a class in doubt, and even before we set foot in Morningside, the curriculum self-selects for analytical minds. We are privileged in that it is our full-time job for four years to question the self, the state, the church, producers of knowledge, ways of thinking, epistemologies, histories, our professors, and ourselves. It would be hypocrisy not to question our school as well. We came because we wanted to philosophize with a hammer, to peer out of the cave, and this impulse springs from our eagerness for cognitive dissonance. Emerson said about people that, “only as far as they are unsettled is there any hope for them.” We are the unsettled.

One of the insights of the American Enlightenment is the idea that dissent is integral to the institution. When President Bush said, “You're either with us or you're with the enemy,” Jefferson rolled over in his grave. It is a trope of the Core that the good ideas will rise to the top and the bad ones will provide contrast rather than trouble. If criticism is false, then it is harmless. The Enlightenment conception of reason as an agent of salvation is still pervasive on this campus. Groupthink has no relationship with reason, which is why we only seldom indulge ourselves with the comfort of a rally around the flag. It would be a betrayal of conscience to put our books down once a week, and enter the herd mentality that has been euphemized in America as “school spirit.” Here everyone's a critic. Our lack of school spirit is demonstrative of the spirit of our school, not some deficiency of collective character. There are many things wrong with the culture of Columbia, but the fact that we judge ourselves based on our contribution to human knowledge instead of our NCAA rankings is not one of them.

I went to homecoming. I got drunk and had my face painted. And I confess that I had a lot of fun, but I think once a year is enough. We did not come to New York to languish, or smirk, or stand agape. We came to participate and we came with the expectation of hard work that gives New York its adrenaline Geist. I like this culture. I like that our athletes are scholars first. I like the Manhattan zeal that substitutes for lawn chairs and backwards hats. In the words of my Lit Hum professor, “You stepped over eleven bodies to get here, you may as well do the readings.”

Two columns ago I condemned the University for its lack of intellectual diversity, and it certainly has its epistemic problems. But that spirit of criticism that makes me wary of my school is a product of my school, and we all owe this place a lot for opening our minds to skepticism. That deserves a cheer.