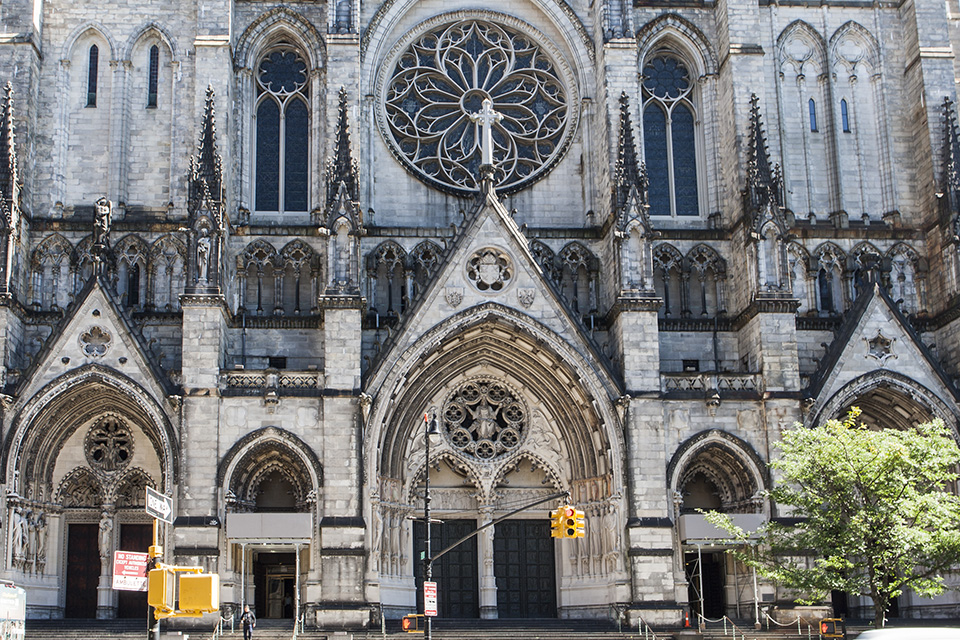 Two 15-story apartment buildings may be built on the Cathedral of Saint John the Divine's Close on Amsterdam Avenue and West 113th Street.

The Cathedral of Saint John the Divine is now considering its newest potential developer for the northernmost piece of property on its beautiful and historic Close on Amsterdam Avenue and West 113th Street. But this latest attempt to exploit rising real estate values in the neighborhood would be a huge monstrosity—shrouding the landmark cathedral's façade and eaves, bringing hundreds of cars and trucks to the narrow streets surrounding it, and destroying the pastoral elegance that has defined the Close for more than 113 years.

This project—consisting of two 15-story apartment towers—is even larger than the one the cathedral recently finished at Morningside Drive and 110th Street, from which it receives an annual income of $2.7 million. These new towers would be as high as the cathedral's eaves and would cover almost all of the area between Amsterdam Avenue and Morningside Drive currently used for parking and sheds. They contain over 400 rental apartments, most of which will be luxury rentals, plus a garage for 240 cars and a loading dock opening on Morningside Drive.

If the development goes through, the cathedral's north façade, with its superb stained glass windows and finely detailed sculpture, will be partially visible only to residents of the apartments and to those who make their way along the narrow passage between the cathedral and the towers.

The vision of the master planner and architect for Saint John the Divine, Ralph Adams Cram, was that of a small, pastoral place of peace and tranquility within the large bustling city. With its French medieval design, the lower buildings, gardens, and pathways were part of a total design with the cathedral as its "mountain." Care was given to ensure perpetual light and air around its magnificent stained glass windows. That concept will be shattered by the building that the present Board of Trustees insists it must have.

The project will bring more car and truck traffic to 113th Street—a narrow, two-way street that is already congested with ambulances that have to double park and police cars arriving at St. Luke's emergency room. It will also increase the pressure on the overtaxed supply of on-street parking spaces and will limit access to the firehouse on the opposite side of Amsterdam Avenue. The garage and loading dock will bring hundreds of vehicles to Morningside Drive, another narrow two-way street that edges Frederick Law Olmsted's tranquil Morningside Park.

One has a unique feeling upon stepping into the Close of Saint John the Divine. It houses a beauty and peacefulness needed by the community and appreciated by all the visitors from the city and beyond.  As Landmarks West stated in its testimony before the New York City Landmarks Preservation Commission, "The Cathedral Close is architecturally significant not solely for its individual buildings but also for the rich, multi-layered ensemble they create. Together, these elements tell the story of the sites' development over more than 150 years, the last 113 of which have been devoted to fulfilling the bold ambition to erect one of the great churches in the world right here in New York City—a cathedral worthy of a great city' as architectural historian Professor Andrew Dolkart wrote."

It was in the last decade of the 19th century when the three institutions that now dominate Morningside Heights—Saint John's, Columbia, and St. Luke's Hospital—left their midtown homes to relocate to the undeveloped pastoral bluff west of Harlem. Only the cathedral has maintained the neighborhood's original pastoral elegance that residents and students continue to enjoy for both religious and civic purposes, and for the contemplative repose available in so few places in our crowded city.

Should all this be desecrated for even more luxury apartments in Morningside Heights? We need to stop the body slam that these apartment buildings will deliver to one of our great national treasures.

The author is the president of the Morningside Heights Historic District Committee.

To respond to this oped, or to submit an op-ed, contactopinion@columbiaspectator.com.