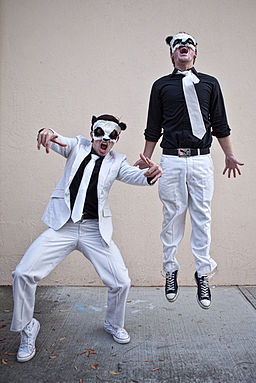 EDM duo The White Panda will headline this year's Columbia Music Festival, according to an email from Caroline Park, SEAS '16 and Class of 2016 vice president for the Engineering Student Council. The show, which starts at 8 p.m. on April 9 in Roone Arledge Auditorium, will also feature student DJs Vonzie (aka Sean Von Ohlen, CC '14), DJ Dwai (aka Andrew Jorquera, SEAS '16) Nøvachord (aka Mitchell Veith CC '16), and DJ Klassius Klay (aka Klay Roberts, CC '16)—who will take the stage before The White Panda. According to Park, the event is unticketed, but students will have to show a CUID at the doors, which open at 7:30 p.m. The first 300 people will get free t-shirts, and neon attire is encouraged, according to the Facebook event. more The White Panda is made up of DJ Griffi and Procrast, focuses on mashups, and has release four full-length albums,  the most recent of which was last summer's "Bearly Legal." One of the notable mashups on "Bearly Legal" brings together artists like Green Day and Demi Lovato, as well as Wiz Khalifa and Marvin Gaye. Columbia Music Festival is put on annually by the student councils of Columbia College, the School of Engineering and Applied Science, and General Studies, as well as Barnard's Student Governing Association. Word on other CMF events is still forthcoming.