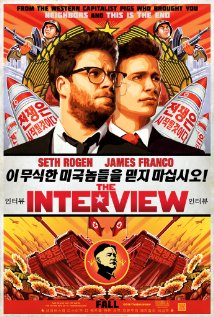 "The Interview," a comedy starring James Franco and Seth Rogen, has been filming near campus since Sunday. If you've seen giant white trailers parked along 114th and 113th streets, and the smell of hotdogs wafting up from a grill positioned at 112th Street between Broadway and Riverside, that's why. You have until 7 p.m. today to see if you can catch either of the two stars. Flyers announcing the filming ambiguously referred to the film as "Untitled Xmas Project," but the makeup artist we politely asked let it slip. We weren't lucky enough to spot Rogen and Franco, but we did bear witness to this exchange between a student and a crew member outside one of the trucks: Student: "Oh my god, you work with Seth Rogen and James Franco? How do you not molest their faces everyday?!" Crew member: "I do. I'm their makeup artist, so I'm legally entitled to molest their faces." In the film, described as an action-comedy, Franco and Rogen play Dave Skylark and Aaron Rapoport respectively. They run a celebrity tabloid TV show, and land an interview with dictator Kim Jong-Un when they find that he is a fan of their show. But plans change when Dave and Aaron are recruited to assassinate Kim Jong-Un. Sounds like just the kind of politically themed action-comedy the world has been waiting for. Watch the trailer, and see the cryptic flyer, after the jump.