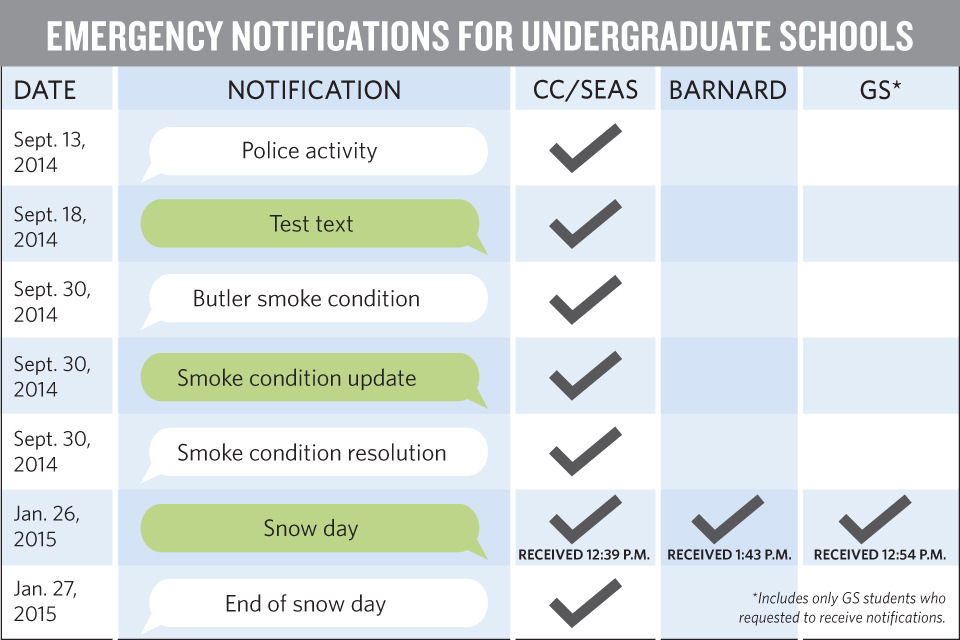 When a suspicious package was identified on Broadway and West 116th Street in April 2013, Barnard Public Safety notified students of the potential danger and advised them to "shelter in place until the all-clear is given."

However, the city fire department had given the all-clear more than 10 minutes before Barnard first notified students.

An email from Barnard Public Safety sent to students after the incident acknowledged the delay, blaming technical difficulties, and said it would work to improve the notification system in the future.

But Barnard's emergency response system has continued to face scrutiny from students, most recently following the administration's response in March to a fire in a Barnard's 600 W. 116th St. dorm.

Though the fire started around 11 p.m., Public Safety didn't send out an alert to students until 12:20 a.m., advising residents of 600 to find shelter for the night and notifying them that the fire was "under control." But when Spectator contacted the Fire Department of New York at 12:39 a.m., a spokesperson said the fire was not yet under control. The FDNY did not confirm it was under control until 12:46 a.m.

According to Julia Qian, BC '15 and Student Government Association president, the chain of command in Barnard's emergency system is not clearly communicated to the student body.

"I definitely think out of all the concerns I've heard, one big thing came up with communication. So once any emergency situation happens, who is the go-to person?" Qian said.

Ariella Kepecs, BC '15 and a resident of 600, previously told Spectator that she felt the delay in notifying students of the fire had exacerbated an already stressful situation.

"It took them two and a half hours to give us any sort of update on what was going on, which was absolutely awful. They should have told us to find our own accommodations earlier, and it just made everyone even more nervous," Kepecs said. "When they had evacuated the building, they should have sent an email or something saying, 'We evacuated the building, there was a fire going on, we'll let you know.'"

Barnard Public Safety Director Dianna Pennetti said in an emailed statement to Spectator that the initial delay in sending out an alert was intentional.

"The emergency notification system operated properly on the night of the fire. A judgment call was made at the time to delay notification until the immediate danger had passed so that emergency response personnel could more easily contain the situation and crowds," Pennetti said. "In retrospect, we would have transmitted the message sooner."

Pennetti decides whether or not a situation warrants sending emergency notifications to Barnard students. In her absence, the responsibility falls to the senior shift supervisor.

Between September through January of this academic year, Columbia students received at least six emergency response texts, notifying students of nearby police activity, a smoke investigation, and class cancellations. In the same period, Barnard students received one notification, a text stating that classes were cancelled due to snow. This text was sent an hour after Columbia College and School of Engineering and Applied Science students were told classes after 3 p.m. would be canceled that day.

When the police departments investigated a suspicious package on Broadway and West 116th Street, CC, SEAS, and General Studies students enrolled in the text notification system received the following notification: "Police Activity in the area of 116th street and Broadway. Please avoid area until cleared."

But Barnard students were not alerted to this potential threat at all, despite Barnard's location on the corner of that intersection.

Seventeen days later, Barnard students again did not receive any notification when Butler Library was evacuated so the FDNY could investigate a "smoke situation." Columbia's Public Safety office sent three texts to CC and SEAS students with updates on the situation.

The University's Emergency Management Operations Team, which develops Columbia's emergency plans, is comprised of Public Safety command staff and senior managers from Barnard and Columbia. But Barnard also has its own Emergency Management Committee, chaired by the director of Barnard's Public Safety and composed of upper-level administrators including the deans of student and residential life.

In an effort to improve the speed of its emergency response system, Barnard Public Safety is in the process of creating templates for texts to expedite the drafting process for emergency notifications. The Public Safety office will also start to pass some communication responsibilities to Residential Life and Housing staff.

"Residential Life staff are being specifically trained and tasked with sending text messages in emergency situations, which will free up Public Safety staff to tend to the emergency at hand," Pennetti said.

Barnard's Emergency Management Committee and Department of Public Safety will test the emergency notification system and conduct an "emergency preparedness and response exercise" in Altschul Hall on Thursday.