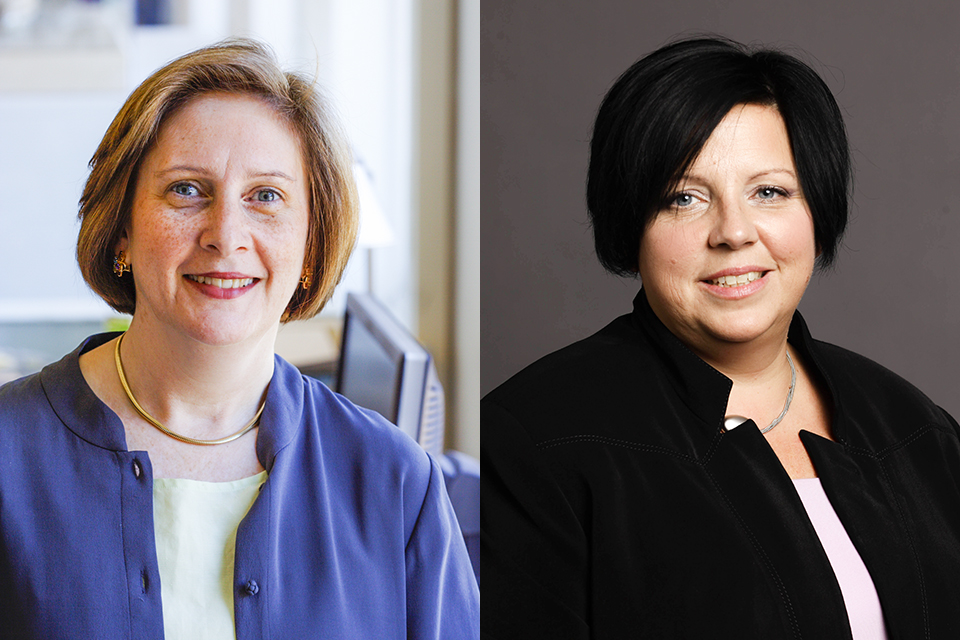 Heidi Blau, left, and Suzanne Castellano, right, are working together to design the LeFrak Center swing space at Barnard College.

With construction for Barnard's new LeFrak Center swing space—which will house the library and faculty offices when Lehman Hall gets demolished this December—underway, Spectator spoke with Heidi Blau GSAPP '83 and Suzanne Castellano, two women who have been instrumental to the space's creation, to hear about their experiences working on the project.

Heidi Blau ensures the project runs smoothly by overseeing designers and staff working on the swing space and has presented design plans to Barnard faculty and administration.

Blau graduated from Smith College in 1980 and from the Graduate School of Architecture, Planning and Preservation in 1983. She has been practicing for 32 years and has worked with mostly cultural and educational institutions, including Lincoln Center.

"I enjoy creating spaces where people can learn, grow, and challenge themselves and reach their potential," Blau said. "I think it's an amazing thing."

Blau has directed a number of renovations at Lincoln Center, including the expansion of the Juilliard School and renovations of Alice Tully Hall. Her other credits include helping with the creation of the Fordham Duane Library, the Brooklyn College library, and the art reference library at the Frick Collection.

Blau also works with the American Institute of Architects' diversity initiatives, which aims to promote women who enter the field of architecture.

Blau said that though there has been a trend of more women studying architecture at an earlier age, only about 18 percent ultimately end up staying in the field after five to 10 years.

"Right now, the number of women coming out of the architectural schools are 40 to 50 percent, but within the first 10 years we go down to losing—they call it the missing 32 percent," she said.

AIA has been working with New York state to see if anything can be implemented to help keep the "missing 32 percent" of women who stop working in the field, according to Blau.

But as for Barnard's swing space, Blau said she was excited for the new "energized" space.

Suzanne Castellano, who has been working in construction for over 20 years, oversees the scheduling and cost for construction of the swing space.

Castellano joined Turner Construction 18 years ago after working in the utility business with energy company Con Edison and as a facilities manager for makeup brand Estée Lauder.

But soon after joining Turner as a mechanical-electrical engineer, Castellano discovered that construction was what she was most excited to do.

"While it's crazy like a roller coaster, it's exciting because it's always changing," Castellano said. "Every project is a different opportunity to learn something new and so I feel like I keep growing, and that is something I very much enjoy."

"It's kind of like having a different job all the time," she added.

Castellano's previous projects include the creation of a tennis center in Flushing, a courthouse in Brooklyn, and an airport terminal at JFK.

For Barnard's swing space, Castellano said that thorough planning was necessary in order to meet the projected December deadline—and to avoid scheduling conflicts with on-campus activities.

For example, the conference room on the second floor of the swing space will include glass walls, which take about 11 to 12 weeks to fabricate. Castellano said that it was crucial to order ahead—and thus have exact measurements prepared ahead of time—in order to complete the building on time.

For Castellano, simultaneously pursuing construction while keeping the building accessible has made working on the swing space a unique experience for her.

Correction: An earlier version of this article stated that Heidi Blau was a managing partner at FXFOWLE Architects. In fact, she is a partner at the firm. Spectator regrets the error.