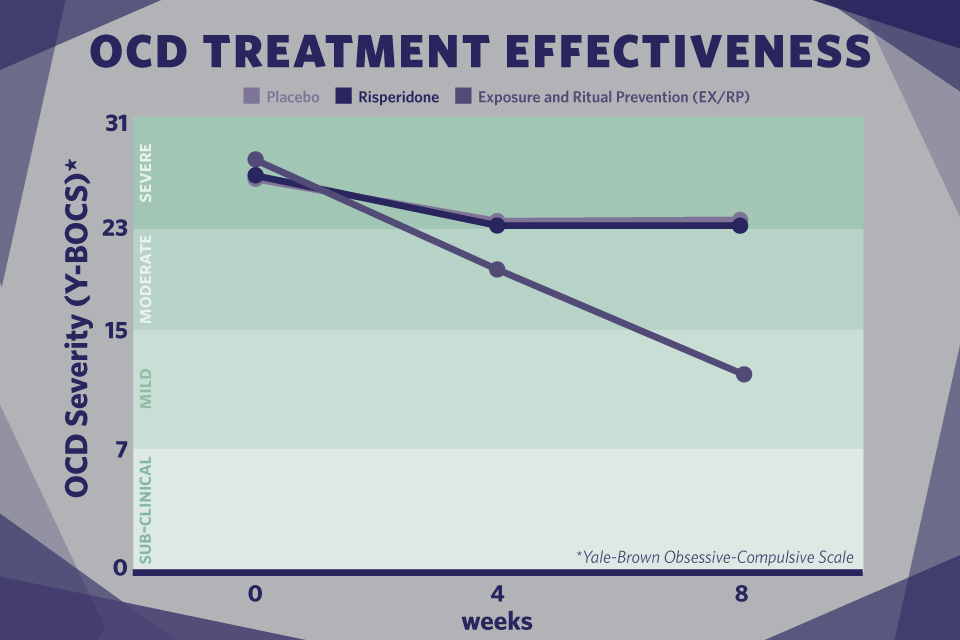 Personalized treatment for people with obsessive-compulsive disorder has made new headway thanks to a collaboration including researchers from Columbia and the New York State Psychiatric Institute.

Last month, the team published a paper in the Journal of Consulting and Clinical Psychology detailing the results of their experiment comparing two OCD treatments, therapy and the antipsychotic drug risperidone.

The researchers found that therapy was more effective at reducing the severity of OCD symptoms than risperidone. This finding serves to confirm previous studies and build on them by identifying how different factors such as age affected the treatments.

In the United States alone, two to three million adults and at least 500,000 children and teens suffer from OCD.

The disorder, often mischaracterized as a simple preference for neatness and order, is marked by the presence of obsessions—intrusive thoughts that generate stress and anxiety—and compulsive, repetitive behaviors that result from these obsessions.

"All OCD patients have obsessions and compulsions, but the content really differs between patients," said professor of psychiatry and Director of the Center for Obsessive-Compulsive and Related Disorders Helen Blair Simpson, a co-author of the paper.

One common symptom of the disorder is an intrusive fear of contamination, which can result in compulsive hand-washing and cleaning behaviors that have come to be associated with OCD. But the disorder manifests itself differently in everyone.

"I worked with a patient who was terrified that he was going to run someone over when he drove his car. So every time he got to an intersection, he was checking his rearview mirror [and] oftentimes he was going around the block to go back to the intersection multiple times," Simpson said. "As you can imagine, that really impaired his getting to work and getting home on time."

To treat OCD, doctors first prescribe serotonin reuptake inhibitors, commonly known as SRIs, which increase the effects of the body's natural supply of serotonin, a neurotransmitter that contributes to feelings of well-being.

But SRIs are usually not completely effective in eliminating the disease's symptoms, so therapy or antipsychotic medications are often added to treat residual treatments. However, neither treatment was widely studied until recently, and the factors affecting each treatment were even less understood.

Exposure and response prevention, also known as EX/RP, is a type of therapy in which patients, with the guidance of a therapist, intentionally expose themselves to thoughts or situations which promote anxiety and obsessions and then choose to not perform the subsequent compulsions.

Antipsychotics may also be prescribed to eliminate symptoms remaining after SRI medication. Risperidone, the antipsychotic investigated in the study, is one of the leading antipsychotics used in OCD treatment and research.

To investigate the effectiveness of EX/RP and antipsychotics in augmenting SRI treatment, researchers randomly divided 100 participants into three groups—40 were given EX/RP therapy, 40 were given risperidone, and 20 were given a placebo pill. All participants had been on SRI medication for at least 12 weeks prior to the trial without significant improvement to their conditions.

Patients who received therapy experienced significantly reduced OCD symptoms as compared to patients on risperidone, which had the same result as the placebo.

"The surprise, if you will, in the study was the risperidone effects, because the risperidone did not beat the placebo," Simpson said. "The exposure and response prevention was far superior to both pill placebo and risperidone."

Based on this data, Simpson said that patients who have not had sufficient symptom relief through SRI medication alone should try EX/RP therapy before trying antipsychotic drugs.

The experiment also aimed to identify and understand how different factors—depression, hoarding symptoms, and age—influence the efficacy of therapy and risperidone. With this understanding, the researchers hope to provide more personalized care for OCD patients.

While risperidone's effectiveness increased with patient age and number of hoarding symptoms, it was unaffected by depression. Risperidone also witnessed a decrease in effectiveness for patients with more severe OCD.

In contrast, the efficacy of EX/RP wasn't influenced by any of the factors, and remained the most effective treatment method.

Simpson hopes this study will help counteract what she says is the misperception that risperidone is an effective treatment for OCD, especially in severe cases.

These results from clinical trials, which can provide concrete information on the effects of different treatments, are critical in Simpson's mind.

"To actually help people who have these illnesses, to help the people of today who are struggling with these illnesses now—it's these types of studies that have direct implications on patient care," Simpson said.