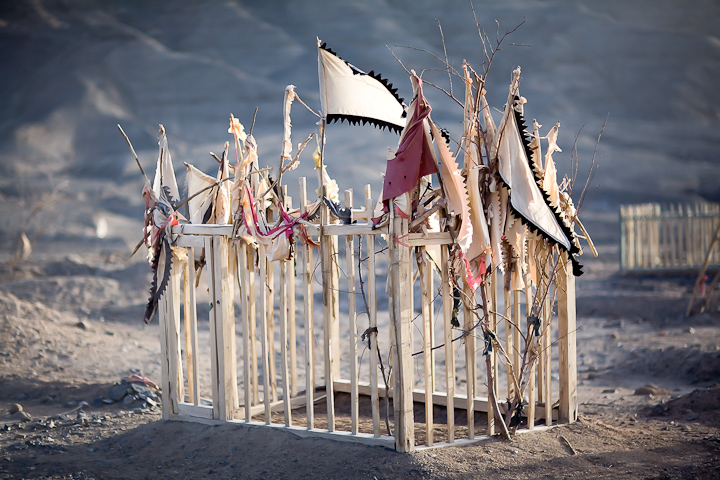 One of the largest parts of China, the Xinjiang Uyghur Autonomous Region, is also one of the most introverted. But thanks to her friendship with an Uyghur anthropologist, Lisa Ross, SoA '01, offers a rare look at the landscape in a new photography series at the Rubin Museum. "Living Shrines of Uyghur China" offers an exclusive look into a region that has long been closed off to foreigners. Spectator sat down with Ross to discuss travel, China, and Ross' obsession with deserts.

Christin Zurbach: People often talk about encountering logistical difficulties when traveling and taking photos. Did you encounter any obstacles with this project?
Lisa Ross: I actually didn't. There were a few times that I was stopped and they asked for my identity papers or passport, but I was never asked to leave or put in an unsafe situation. It's unusual to travel without a tour group when you are off the beaten path, but I really didn't have any trouble at all.

CZ: Could you explain your vision for this exhibition? Did the knowledge you gained from this collaboration affect the way you photographed?
LR: What's important is to not create those kinds of images that we're used to seeing when we're looking at foreign people and a foreign place. As a foreigner, that's always a tricky situation.

It was really important for me to make work that was intimate. I wanted to create images that really captured the holiness of the place. I wanted for the viewer to have this experience of what it felt like to be in these places. As a photographer, what I did was create portraits of these landscapes. That's why they have a little bit of a different look than a traditional landscape photograph. I also didn't want to have people in the images because I didn't want to have you looking at the person looking at the thing, but rather have you experience the place.

Basically, you are going on a pilgrimage and you get to pick how you are going to get there. Are you going to take a motorcycle, a donkey cart, are you going to walk? When you get there, what are you going to eat? Everybody always wants to know, "Who are the Uyghur people?" and "What do they look like?" and "What do they eat?" This interactive answers a lot of questions about pilgrimage that normally aren't answered in the work. It's really playful. They are really fun photographs and it's very different than the images on the wall. The videos that are playing are really about meditation and being at these holy sites.

It was really about hearing the wind and having more of an idea of what it would be like environmentally. There's also an image at the end of one of the videos where two women are burying themselves. That's another thing that happens when people go on a pilgrimage in the desert, people bury themselves as a form of healing.

CZ: In the introduction of your book that corresponds to this exhibit, you mention an obsession with deserts. Your exhibit seems both to capture the desert and refer to the ocean. Can you talk about why you think deserts are interesting to photograph and the relationship between deserts and oceans in your work?
LR: In a very literal sense, the desert is the place that people go for vision. I'm really interested in the idea that the desert is the place throughout history where people have gone for vision, but it's also a place of infinity and greatness—the way the sky and ocean are places of infinity. I think that artists, writers, creative people, non-creative people have always been in awe of the greatness of the desert. For me, the desert contains a history that you can feel. I had photographed the ocean quite a bit at one point. The infinity of the ocean, the neverendingness of it, the way that you'll hear the waves all night and they'll never stop. I know that Xinjiang was at one point ocean, deserts were often ocean—and I just thought it was amazing to see the way markers in the sand dunes with the flags felt like the ocean to me, but the opposite.

CZ: For your book, you collaborated with a historian and an ethnographer. Do you think that having specialists with you facilitated your experience in the country benefited your project?
LR: I like to use the word "collaboration" because I don't think I could have made this work completely on my own. Working with scholars gave me access and created more of a research-based practice. When I first went alone, I really didn't know what I was looking at. When I met the first scholar, the historian, it opened up the project. I had talked to him about where I went, but he was really able to explain what I had photographed.

An earlier version of this article stated "Shinjong was at one point ocean." The region is Xinjiang. Spectator regrets the error.