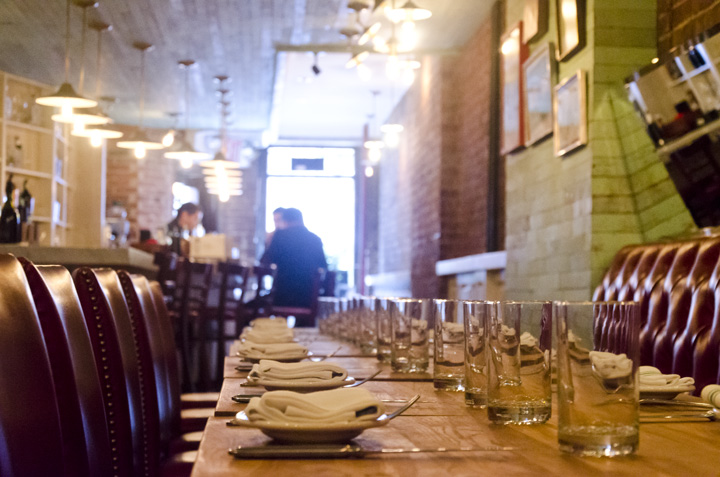 Fusion cuisine had always sounded like a bad excuse to mix various mediocre gastronomical cultures into a quasi-avant-garde aggregate. But I renounced my prejudice at La Pulperia, a Latin American restaurant that opened in Hell's Kitchen on Feb. 11.

A pulperia is traditionally defined as a combination between a tavern and grocery store, so I expected taco-truck food served on silver plates. Treated to a series of culinary delights by head chef Carlos Barroz and mixologist Cesar Chavez, I was pleasantly surprised by this new eatery that features predominantly Argentinian cuisine with Italian and Spanish influences. Its exposed bricks, wooden paneling, and Mexican tiles give it a cozy yet upscale feel, with an ambience for both a romantic dinner and a fancy night out with friends.

Its simple but delicious raw bar offered six clams resting on a painted stripe of pesto, garnished with diced tomatoes, and sweet, rich, and meaty oysters.

The ceviche, a salmon brûlée, was excitingly bright. Every mouthful contained bursts of heat and citrusy zing from the ginger-infused leche de tigre. The dish was paired with the smooth kind of salmon I associate with high-end sashimi beautifully marbled with fat. The olive oil was robust, but it did not overpower the freshness of the lime juice and zest, nor did it make the fish taste too heavy.

The concept behind the cream cheese and brown sugar glaze combination was creative, but the dish toed the line of becoming a mess of indistinguishable flavors. But the individual ingredients, which have capitalized on the trending culinary paradox of sweetened savory dishes, managed to put a unique, sparkling punctuation mark on a traditional dish.

La Pulperia did its ensalada de quinoa right. Challenging the concept of a salad, La Pulperia had cherry tomatoes, hard-boiled egg, and water-shocked carrots peppering a bed of quinoa. The textures—from the crisp skin of the tomatoes, to the soft chewiness of egg whites—gave the salad dimension while remaining grounded in its foundation of nutty carbs. The salad was finished with pungent, but water-tamed red onions and watercress, and dressed with pomegranate vinaigrette. The pomegranate mellowed out the acidity of the vinegar, and softened the pop from the onion. The result was a dynamic and complex winter salad that, although a bit aggressively seasoned, struck the right balance between salty and sharp.

Slathered with flavor, the sangria-braised short ribs entrée is an indulgent dish. Juicy and crisp, it had a lot of character, probably because Barroz's stew contained an alcohol concoction that could be ingested on its own. Once reduced, the slightly sour and acidic notes left by the wine joined the mildly fruity, woodsy butter baste so that I could just distinguish the intentionally over-caramelized onions of the smoky mirepoix. The depth of richness in this dish was highlighted by the vibrant chimichurri sauce, which had the right amount of lemon juice and vinegar to cut the creaminess of the cheese. It was an aromatic, bittersweet flavor boost to the perfectly brined, tangy meat.

A virgin Piscobamba mocktail topped off my meal. Without the smooth and fruity flavor of the Pisco Portón, the gentle taste of the muddled apples was fragrant and oddly tannic atop the tartness and sweetness of the fresh apple juice. There was too much agave nectar for my liking, disturbing the balance of the flavor layers. Overall, though, this was a satisfying concoction.
My culinary escapade at La Pulperia convinced me that fusion cuisine might actually be an emergent property.