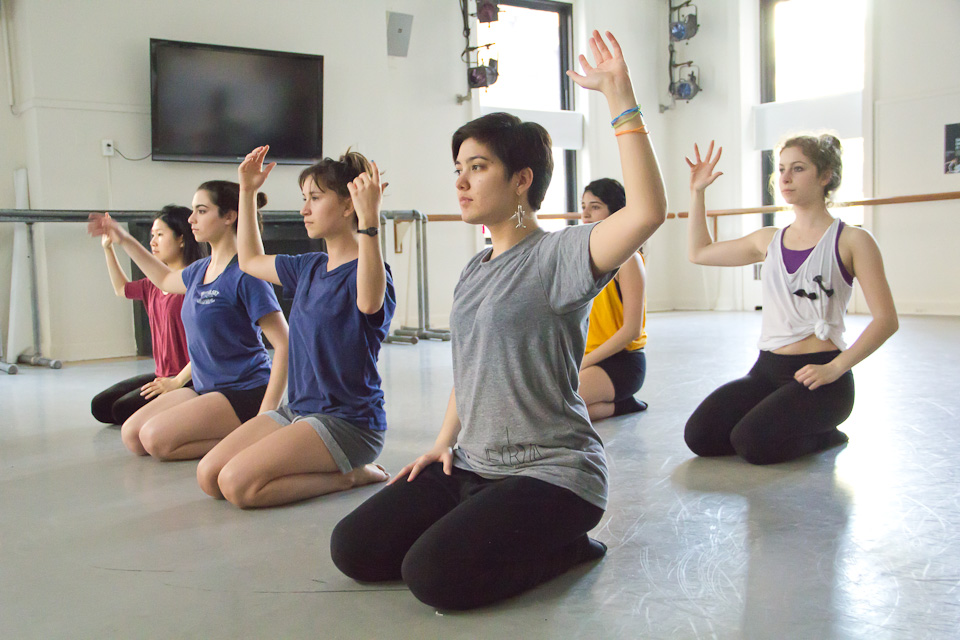 e r a Dance Collective, which was founded by Sarah Esser, BC 15 (foreground), in December 2011, is set to perform its fifth showcase this weekend.

At a typical rehearsal, the dancers of e r a Dance Collective find themselves tangled up in a delicate knot of movement. Their warm-up improvisational work has brought them here, with the dancers smiling and laughing as they carefully maneuver around each other. e r a Creative Director Sarah Esser, BC '15, squats nearby, instructing her dancers to keep moving.

"Really, there are no boundaries at all," dancer Sarah Silverblatt-Buser, BC '15, said.

Improvisational movement and other tasks built to increase dancers' comfort with themselves and their fellow dancers are at the heart of e r a's design.

Founded in December 2011, the collective has grown tremendously since Esser initially asked eight of her friends and acquaintances through dance to participate in a new project. Now a company of 13, e r a has performed in three of New York's boroughs and is performing its fifth showcase this weekend after a sold-out show at the Gibney Dance Center two weeks ago.

"It's becoming really real, which is a little bit scary," Esser said. "I don't know how to run a collective, so I'm sort of teaching myself things as I go. It's sort of fun because I get to make up all the rules."

A year and a half later, Esser and her dancers look back on how far the group has come since their first rehearsals, spent in open hallways and on the lower level of Lerner. Thanks to a very successful Kickstarter campaign in mid-February that raised $1176 of the $500 goal, e r a was able to afford to rent a space of its own and have room for growth. Friends have helped where possible, contributing photography and graphic design for the logo and programs.

The dancers have taken it in stride.

"They were all so into it from the beginning, and what's so amazing is that they're all still so into it," Esser said.  "Each dancer brings a unique style to it, but somehow they all look really great together."

The different backgrounds represented in e r a push the dancers to work together to learn from each other while also learning about themselves as dancers.

"All of us are trained, but in different ways," Silverblatt-Buser, a classically trained ballerina, said. "It's an interesting conglomeration of talents and styles that's allowed us to learn a lot from each other. Being in e r a has really allowed me to branch out by improving my improvisational skills by being more experimental and creative in my movement."

"It's exactly what it sounds like, e r a Dance Collective: it's a collective, a group of people who work together."

Though she serves as the principal choreographer, Esser encourages the dancers to improvise and contribute to the dances in ways that express their own individuality. The Saturday showcase's finale will be structured around the theme of self-portraits, Yun said.

"We have five specific gestures that we come up with specific to each individual dancer, which is the self-portrait element of it," Yun said. "Sarah specifically guides us, but gives us the freedom to move, and that's the beauty of this collective."

e r a's last planned performance of the semester will take place this Saturday in the Marion Streng Studio from 10:30 a.m. to 12 p.m., but the collective will keep rehearsing and growing.

"Even after our show's over, we're still going to continue to rehearse because the process never really can stop," Silverblatt-Buser said.