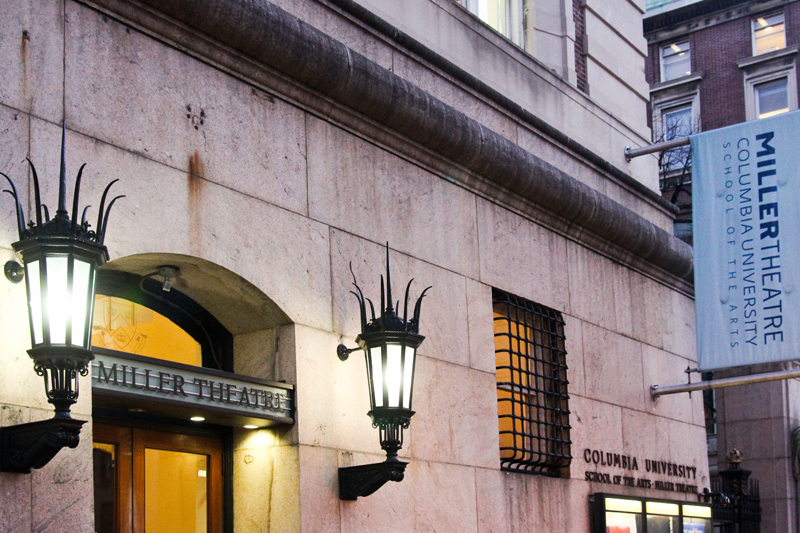 Students, faculty, and alumni signed a petition to "Save the Arts Initiative" in the fall.

Concerns over the Arts Initiative's budget, management, and largely out-of-date website impelled student leaders to start a movement in the fall calling for a reform of the University's flagship arts program.

A "Save the Arts Initiative" petition was widely circulated across the University, garnering 1,300 signatures. Since then, CUarts, as the initiative is known, has undergone significant restructuring, and while the petition's organizers say there is more to be done, both students and administrators are happy that they have begun to strengthen the program.

The issue came to the forefront in October, and, like many students' concerns with the administration, began with a question of money. The Columbia Ballet Collaborative, a dance group composed of students from all four undergraduate colleges, has performed at Miller Theatre since 2009. The sprung floor of Miller has been ideal for the dancers, who enjoyed free use of the space thanks to subsidies from the theater's administrators and from CUarts.

But last academic year, the group was told that Miller would no longer honor that arrangement and that it would have to rent the space. By next year, the price tag would inflate to $9,600 for three days of use, according to Ariana Lott, CC '13 and CBC's artistic director.

"The increase in price has really limited our ability to carry out our mission, which is to bring dance, and specifically ballet, to Columbia," Lott said in the fall.

The ballet collaborative's experience reflects what many in the undergraduate arts community have felt is a fundamental flaw with Miller Theatre—that it is disengaged from Columbia students. The revelation of the increase in price in October drew attention to students' greater concern that CUarts, also led by Miller Theatre's executive director, Melissa Smey, was not doing all it could to support their artistic endeavors.

After the petition took off and administrators met with students, Smey established an advisory group and filled CUarts' vacant associate director position in January. This month, CUarts launched a redesigned website, on which the advisory group gave feedback over the last semester.

The advisory group, which includes 16 student representatives, has also discussed transparency in Gatsby Student Arts Support Fund grant applications, one of the main sources of support for student productions. Smey said that CUarts will continue to work with the group and the greater student body to plan some of the initiative's regular fall programming, including Columbia Nights, Creative Conversations, and Museum Meetups.

The vocal student critics, led by outgoing Columbia University Performing Arts League President Will Hughes, CC '13, were pleased that administrators took action but they contended that more could be done. They still believe that CUarts—which was established in 2004 by University President Lee Bollinger—should have a full-time director distinct from Miller Theatre, that it should not be housed by the School of the Arts, and that its budget should be restored to the level it was at in 2009, when it was cut by 40 percent.

Also important, Hughes said, is the efficacy of the advisory group.

"While the advisory committee is obviously a step in the right direction, given that it is meeting infrequently and serves as more of a focus group than anything, 'effective' would be a stretch," he said in an email.

Alex Donnelly, CC '14 and Columbia College's representative on the advisory board, said that the meetings have done a good job of facilitating communication that was previously missing.

"Once they started [Smey and the new associate director for program adminitration, Lauren Pearson] finding out what sort of issues we were concerned about, they were able to respond to them a lot better," he said. "And I think what we found was that a lot of the issues were really just more a lack of communication than a real systemic problem."

Donnelly pointed to an example of the Gatsby Grants, saying that what he and others believed to be a decrease in funding for a certain year actually had to do with a lack of applications for funding.

"The conversation obviously shifted to 'How can we get more people to apply?' and 'How can we get more qualified applications,'" Donnelly said. "I felt that it was really cool to be a part of that conversation, because until that happened, I was led to believe that the numbers were going down and that there was less money and that it was something to be worried about, but apparently it was just that we didn't apply enough. Now we're in a great situation where we can now shift the focus to how we can encourage more student art and performing arts."

Though Smey remains in charge of both the Arts Initiative and Miller Theatre, the Arts Initiative has still seen growth this year. According to Smey, around 180 classes with more than 4,300 students utilized the ArtsLink program, which connects classrooms with the city's art resources—an increase over last year's 150 classes and 3,000 students.

Hughes, Smey, and Pearson, are hoping for more open communication between administrators and students.

"One of my biggest regrets with everything that happened was the antagonism that characterized the whole ordeal," Hughes said. "Unfortunately, certain administrators seem to have solidified, rather than softened, their positions around involving student input and transparency. But we'll see what happens moving forward."

Donnelly agrees with Hughes assessment of the situation, but believes that the goals of students and the Arts Initiative are very similar.

"I think, unfortunately, kind of how Will said in his email, there was a little bit of hostility between the two groups, and once we finally got in the same room we realized we have a lot of the same goals," he said.

Smey emphasized that the Arts Initiative is always glad to speak with students, noting that Pearson has met individually with every student member of the new Advisory Group, in addition to speaking at the School of General Studies and the Graduate School of Arts and Sciences student council meetings.

"She will continue these meetings in the fall, and if student groups are interested in inviting her to present on the Arts Initiative's programs at their meetings, they should email her directly," Smey said.

Donnelly, for his part, believes that more open communication has been something the committee has brought about, and that Pearson does a good job of staying in touch with students.

"I've been really impressed and really grateful with how receptive they've been to student feedback once the advisory committee was set up," he said. "A lot of administrators seek student opinions, but they really actively go out of the way and that's really cool."

The Arts Initiative has instituted new, weekly drop-in office hours with Pearson and other staff.

"Being intimately involved with the launch of the Advisory Group has allowed me to engage with our students in a meaningful way and to understand what is important to them while they are studying here at Columbia," Pearson said in an email.