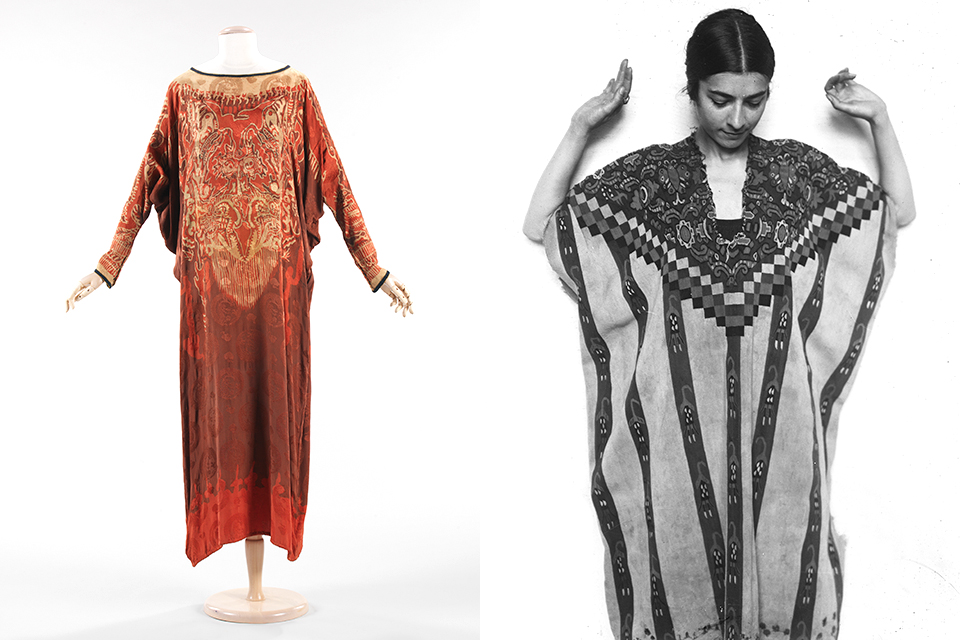 A uniquely American look imbued the '20s with glitz and glamour: Dresses roared with shorter hems and shimmering beads, and flappers graced speakeasies with their carpe diem attitudes and dynamic dance moves. Their appearance reflected a new sensibility of youthful patriotism encompassed in their liberated actions. America's principle of freedom was channeled through vibrant fabrics, adorable bobs, and occasional feathers that added whimsy to the aesthetic. But what inspired the novel design template that was so radically divergent from the established norm? In "An American Style: Global Sources for New York Textile and Fashion Design, 1915-1928," curator Ann Marguerite Tartsinis delves into America's odyssey for a national identity that led to innovation within the world of fashion.

The exhibit is housed in an intimate room on the fourth floor of the Bard Graduate Center on the Upper West Side, and Tartsinis plays with the dimensions of her space to include as much information as possible. Though the presentation is considerable, "unfortunately, this project is very much shaped by what doesn't survive," Tartsinis said at the exhibit's press opening. Because few outfits from the United States in the '20s still exist, she had to compensate for the lack of tangible evidence through the use of technology. Photographs provide a context for her audience, and viewers can flip through sketches from the American Museum Journal or enter the virtual universe of the Exhibition of Industrial Art in Textiles and Costumes in 1919 by tapping on touchscreens. Through this expert employment of 21st-century machinery, connections are drawn between Native American styles and the emergence of U.S. couture.

During World War I, the United States was forced to find its own niche within the garment industry as it was unable to perpetuate its role as Europe's most noticeable copycat. This necessity presented itself as an opportunity for anthropologists at the American Museum of Natural History, who decided to capitalize on the dearth of fashion material to promote a new kind of design that was indisputably American.

Exhilarated and impassioned by the prospect of clothing that transcended mere adaptation of European raiment, prominent figures at the American Museum of Natural History like Charles Mead and Clark Wissler held instructional courses for aspiring designers and gave them unprecedented access to historical artifacts from indigenous culture. Tartsinis' exhibit especially highlights the ability of New Yorkers in the early 20th century to interact with the garbs of Peruvian, Andean, Navajo, and other Native American civilizations. Projections on the main wall of Bard's Focus Gallery form negatives of women sporting dresses from the natural history museum's collection. By being physically involved with these pieces of art, designers developed a consciousness of American dress that has not been afforded them since.

Though photos are a major component of the exhibit, its most stunning display is an aboriginal caftan crafted from salmon skin and painted with pigment. The room also boasts beautiful textiles that reflect the motifs and construction of pre-Columbian society, visible in roller stamps and carvings. The juxtaposition of genuine Native American work and 20th-century interpretations reveals the evolution of the themes embodied in the new American fashion scene, which capitalized on both contemporary and historical features of the New World.

An impressive statement of history through design, "An American Style" provides insight into the foundations of the look that delineated the "New Woman" of the 20th century. Tartsinis shows how elegant and "primitive" aspects combined to reflect America's rugged individuality through a newly refined and luxurious lens.