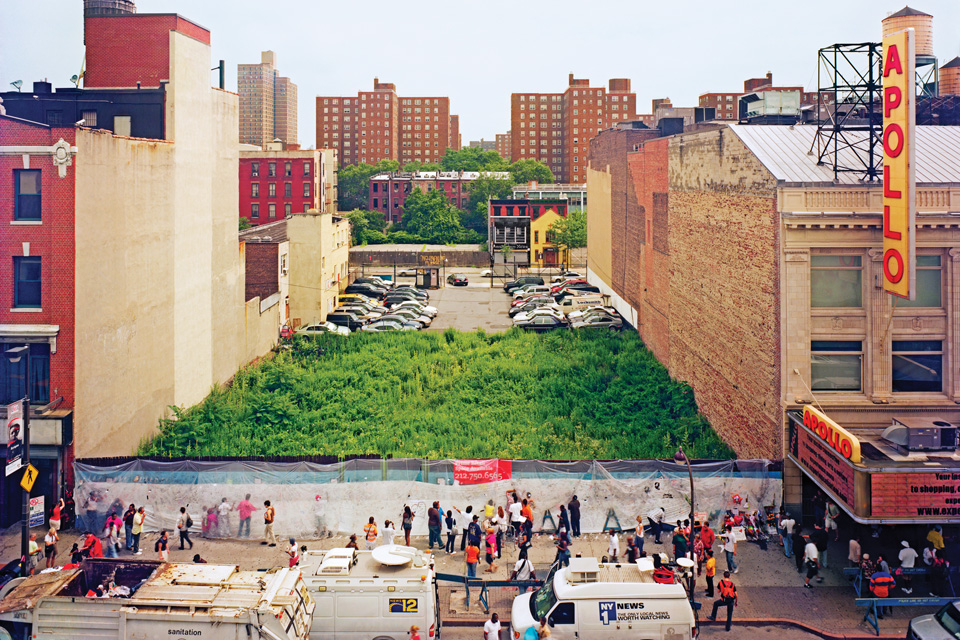 Courtesy of the Claire Oliver Gallery

Michael Jackson Memorial Wall is one of the photos on display at the Claire Oliver Gallery in Chelsea that documents the changes 125th Street has undergone since 2008.

Two artists are opening up a dialogue about everyday life in Harlem by capturing its transformation on camera, reflecting on its past and contemplating its future.

The Claire Oliver Gallery in Chelsea is currently featuring excerpts from the larger "125th: Time in Harlem" project, which includes a series of public programs, exhibitions, and a book comprising 68 photographs of the neighborhood. The project, which was shot from 2008 to 2012, comes in response to the changing landscape of Harlem—specifically 125th Street, which has undergone intense gentrification in recent years. With the expansion of Columbia into Manhattanville and the rise of new developments in the area, photographers Isaac Diggs and Edward Hillel have created thought-provoking work, portraying what was there, and anticipating changes to the area in the coming years.

Shot in film and processed digitally, the photos capture the street with incredible precision. The range and intensity of color in the photographs draw the eye to the layers of depth in each scene.

In capturing the gentrification of Harlem and the loss and preservation of culture, perspective plays a key role. Often using a bird's-eye view, the artists play with the paradoxes within the community. In a photograph titled "Michael Jackson Memorial Wall," residents line up outside the Apollo Theater to sign the wall. In the background is a large lot with a real estate advertisement.

The juxtaposition of a community trying to hold onto the past and the developers looking forward into the future presents an interesting paradox. The large lot dominates the photograph, taking center stage, whereas the Apollo is portrayed as small and dingy in comparison to the vibrant green of the field. These contrasts constitute a theme that runs throughout the exhibit.

Part of the purpose of these photographs is to take a closer look into these ordinary spaces and capture the everyday feeling they portray. This is highlighted in "Victoria Theater," which captures the theater with people walking by in blurred motion the historical theater the foreground. Photographing the theater in focus gives one the sense that it is a forgotten city landmark—people are moving on.

Students will recognize many of the street scenes and historical landmarks captured in these photographs, such as the Apollo, which appears in a number of the pieces. The artists claim that there is no political agenda, but, since they were blatantly pointing out the paradoxes within the community, it's hard not to walk away thinking they had an objective in mind.

Though the photographs are beautiful with their many physical and metaphorical layers, it's a trek from Columbia just to see 10 large-scale photographs displayed in this small, square space. However, if you're in the area, the exhibit is definitely worth a visit.