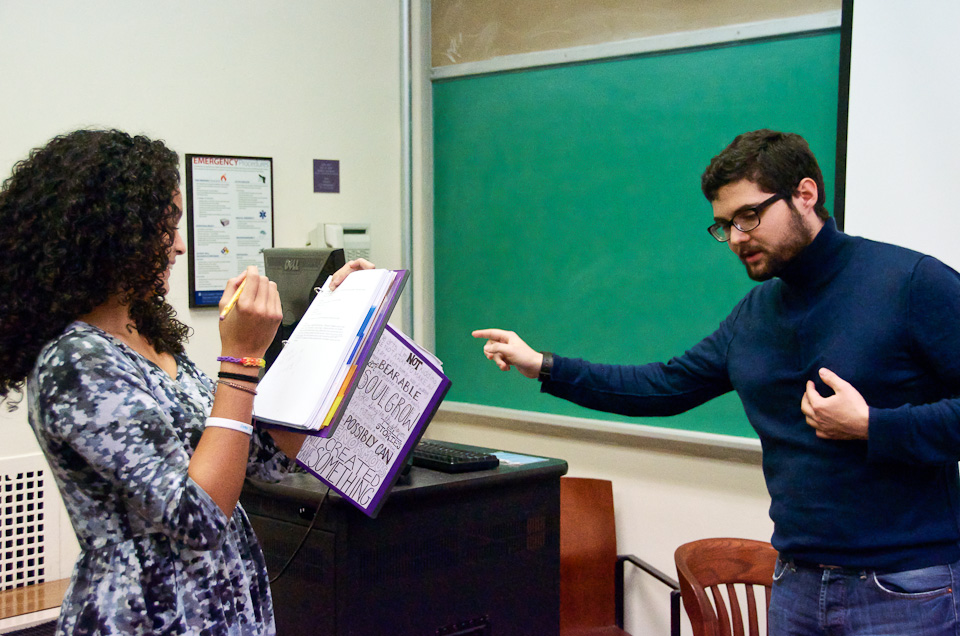 The Gift director Cristina Angeles, BC 16, left, and Joseph Powers, CC 16, rehearse ahead of the plays opening this weekend.

Last year, Anika Benkov, CC '16, penned "The Gift," a work based on her experiences with loss, grieving, and death. Benkov has since revised and expanded the play, which debuted in a 20-minute-long iteration at WORDPLAY, an annual playwriting workshop series sponsored by New and Original Material Authored and Directed by Students that features staged readings of one- and two-act plays. Now, the play will be presented on Dec. 7 and 8 at the Alpha Delta Phi fraternity's house.

"The Gift" stars Joseph Powers, CC '16, and chronicles the ways in which a community grieves in the aftermath of a girl's death. Inspired by documentary projects she has worked on, Benkov opted to present her play—which she said began as more of a short story than a theatrical work—through a fragmented narrative.

"My method was kind of impressionistic," she said. "It was based kind of on specific images that I imagined and expanded on and finding the meaning between those."

The nonlinear narrative, which weaves together scenes that take place in the present with characters' memories and dreams about the past, reiterates the chaos and confusion that accompany loss.

"There can be a scene where the main character is 10 years old, and in the next scene, she's 17," producer Cristina Angeles, BC '16, said. "And then it goes back to her being 12. But it's kind of snippets of how she's remembered and how people viewed her as they're trying to justify and reason with her death."

"We don't experience memories, we don't process things, in a linear, completely logical fashion," she said. "It's different, it's experiential. It's immersing you. Sometimes when I'm watching these characters process the death and the different ways that they do, I feel like I'm inside their minds and things don't always make complete sense there, and that's exciting."

While Benkov's unorthodox narrative mode adds complexity to her play, she's worked to make it accessible to actors and audience members alike.

"Once the play gets interpreted, the play becomes everyone's own story," Benkov said. "One of the good things about this play is that it's a story about communal grieving, so it does belong to community in a sense."

Angeles thinks audience members will relate to the content.

As a student-written work that went through workshopping and revisions before going into rehearsals, the creative team was able to watch "The Gift" change and grow.

"We could really talk to Anika if we had questions," Chasan-Taber said. "We could hear her thinking behind different choices, and we could also watch as characters and relationships evolved."

As the curtain is about to come up, Benkov emphasized the meditative nature of her work.

Performances of "The Gift" are on Saturday at 8 p.m. and Sunday at 2 p.m. at the Alpha Delta Phi house. Tickets are free with a reservation at the TIC.