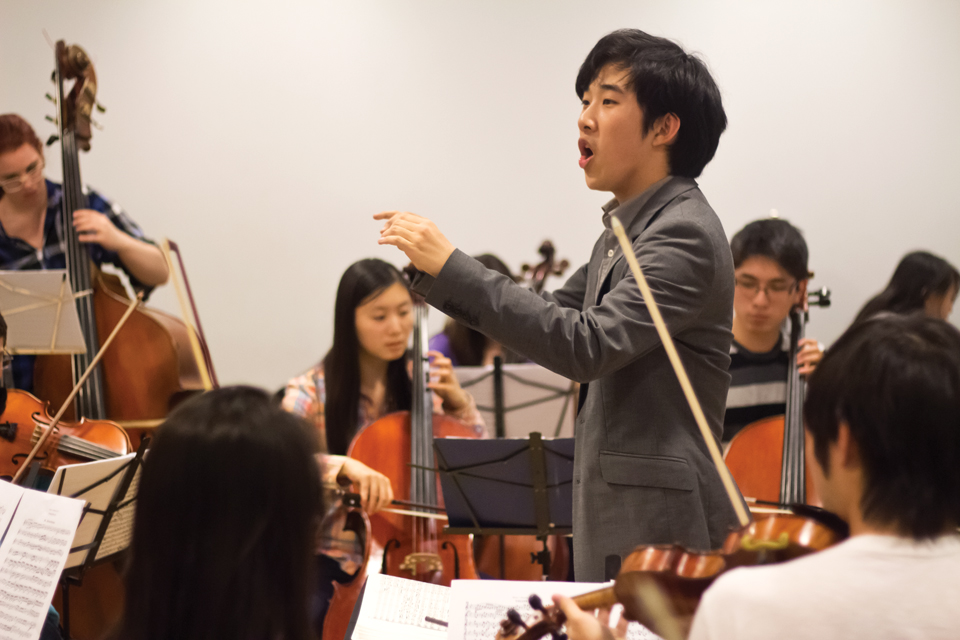 Singing Mozart's Requiem Mass in D minor is all about bending the knees.

It's a Monday night and Bach Society director Kevin Lee, CC '14, is instructing his classical musicians to bob up and down to the chorus. While Baroque-era music might not immediately suggest this kind of movement in its performance, Bach Society is shaking up expectations for its winter concert on Saturday in St. Paul's Chapel.

"These students expect to play high quality music, and that's what we do here," Lee said. A new wave of student leadership began when previous director Harrison Hollingsworth went on a leave of absence and yielded his position to then-assistant director Lee.

Lee said he's impressed that, as amateurs, he and his musicians can take on the challenge of Mozart's Requiem. The Bach Society is the only ensemble at Columbia that integrates choir with orchestra. A complex sound is created by layering percussion under piano, strings, winds, and voice. Instrumentals must provide a steady carpet for the choir, and the two sections endeavor to merge, as the choir sometimes overpowers the orchestra.

"Initially, it was a lot of work to figure out where everyone fit, a lot of the time since most of the orchestra is accompanying the choir," Bach Society member Jonathan Balsano, SEAS '14, said. "And as we've gone on, we've definitely improved on bringing out certain parts out at different times to really get a character."

As a 14-year-old ensemble, the Bach Society has seen successful years under previous directors, touring Germany and releasing a CD under former director Ken-David Masur. The group continued to perform classical pieces such as Handel's "Acis and Galatea" and "Theodora."

Lee describes today's Bach Society as a "grassroots, student-run" group looking to bolster its student engagement through social media. The outreach is also reflected in the ensemble's membership, which integrates professors and even non-Columbia musicians.

Alto and first-year Ph.D. student in the School of Engineering and Applied Sciences Irene Lo said she enjoys the student-run aspect of the ensemble and was surprised to find this type of group at Columbia.

Lo, who attended Princeton University as an undergraduate, was impressed by Bach Society.

"Princeton has a lot of vocal groups, a cappella groups, but nothing of this sort," Lo said.

Lee believes that although the group is tackling high-level pieces, including Kyrie—which Lo said she finds highly challenging—the musicians can pull it off because "they love music, and they love playing music."

Correction: An earlier version of this article stated that Geoffrey McDonald was Bach Society's previous musical director, when, in fact, Harrison Hollingsworth was. Kevin Lee was actually not the ensembe's first student director. Spectator regrets the error.