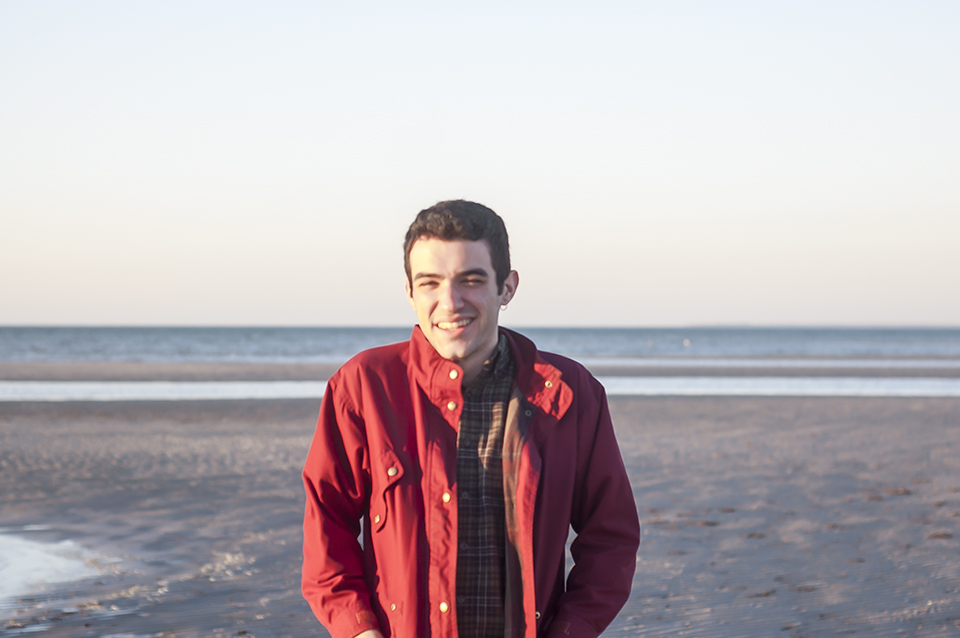 Jake Gagne, CC 16, has released three EPs as Won Ton Death, the most recent of which he put out over winter break.

Jake Gagne, CC '16, has been busy, musically speaking. When he isn't playing bass for the Columbia University Orchestra or drums for the band Rutabaga, he's making music as Won Ton Death. Last May, Gagne released his first EP "Violent Moan," and over winter break put out "Gay Schoolgirl EP" as well as two singles.

Spectator sat down with Gagne to talk about his musical diversity, identity, and the urgency he felt in making "Gay Schoolgirl."

David Salazar: Why do you make all these disparate types of music?
Jake Gagne: I had not thought of that before but I mean my background in music is playing classical bass—that's how I learned all my musical rudiments or whatever. But I guess the stuff I do solo is just what comes naturally to me. It's just whatever arises organically, and Rutabaga's just a side thing. That's not really a serious project.

DS: On "Violent Moan," you didn't sing much, but you sing on every track with "Gay Schoolgirl."  Why is that?
JG: "Gay Schoolgirl" was kind of a reaction to and a culmination of a very weird and kind of fucked up part of my emotional life, and the project kind of came out of a sense of urgency where I just felt that I needed to communicate something with the lyrics, whereas on "Violent Moan" it's just kind of cool sounds. So "Gay Schoolgirl," I guess I just felt like I had to sing more because I needed to say stuff in the lyrics that I never had really felt the need to express before. That being said, I really hate singing. I wish there was someone else who could sing my songs for me.

DS: You said it came out of a weird time in your life—is that why one of the songs is called "In the Desert?"
JG: Just to elaborate on that, I guess it was a period where I felt very isolated—obviously the desert is a very heavy-handed image of that. But I think even beyond just that song, the whole album, the lyrics about alienation and the feeling of being an other, being irreconcilably different from everything that's going on around you and being unable to take part in that even as you want to.

DS: You talk about this otherness, and that's a big part of the album. Would you describe it as a queer album?
JG: You could say that. It's kind of like a concept album that's queer in a way. I was hanging out with my friend and his sister and we were using this random band name generator and one of the things it spat out was Gay Schoolgirl and we were like "Wow, that's kind of dumb," but it kind of stuck with me. And gradually it became a sort of character that I based the album around. Just like the gay schoolgirl as someone who is dealing with this new info about herself—that she is gay—and trying to figure out to what extent her gayness is a part of her and to what extent it's just something that's one of her characteristics.

I was thinking about it in terms of a divide between the kernel of your capital-s Self—the part that is undoubtedly you—and everything else that's just kind of contingent. And I think something that every queer person—or at least I wrestled with it, and I assume it's common to most queer people, is: are you someone who is capital-g Gay—like it's part of my identity—or am I just a man who falls in love with other men? And is it just something that isn't really that important to the qualities that make me ineffably me? So I guess it is pretty queer music, just in that it is addressing ideas of people and experiences that fall outside of the norm.

DS: When you released the latest two songs, "Vowels" and "Cute-Ass Floral Blouse", you said this would be the last thing you do for a while. Why is that?
JG: I put a lot of thought and emotion into "Gay Schoolgirl" and I thought I was going to be done after doing that, plus those two other songs, but I'm working on something else, and I don't know what it'll be but it might be a full-length album, hopefully.

DS: Are you planning on performing?
JG: It's something I thought about. The songs would be really hard for me to do alone. I'd have to get a band together, which I could do—that's what Tame Impala is, I guess. Kevin Parker writes all the tunes and he has a band that plays them, but I don't know. Maybe I'll do like weird, stripped down acoustic sets, but probably not. That's too much work.

DS: Where did Won Ton Death come from as a name?
JG: It's a pun on like, wanton death, like widespread death and destruction, which I think is kind of funny, and I like things that are melodramatic. And death by greasy Chinese food really appealed to me.