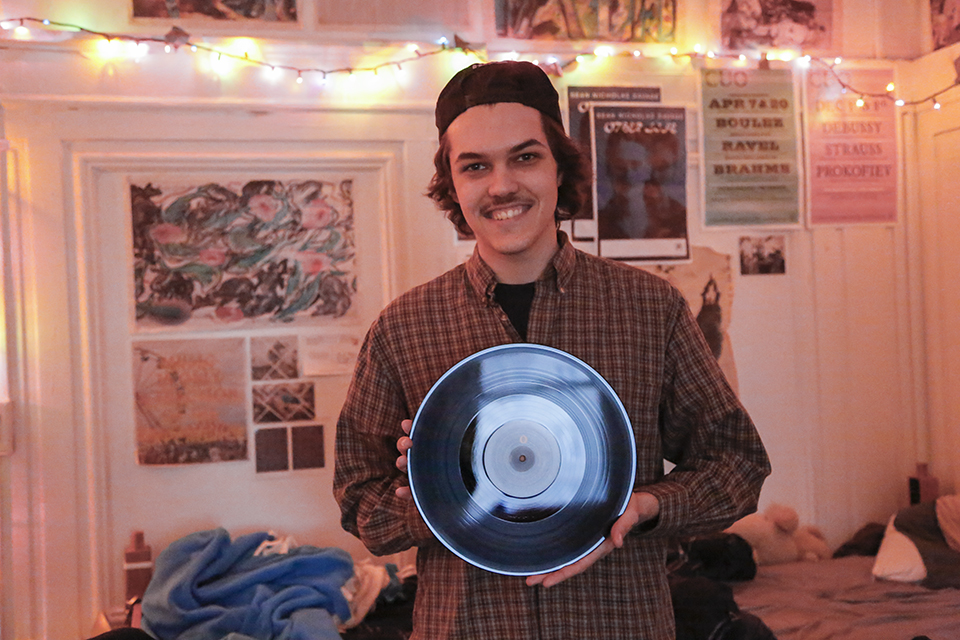 Sean Delanty, CC 16, makes music under the name Solid Gold Luxury, and is using his classical training and knowledge of music history and theory to inform his electronic beats. Delanty hopes to release an EP in the near future.

It seems as though each semester brings a new wave of experimental music from the Columbia community, and this one is no exception. One of Columbia's newest artists is Sean Delanty, CC '16, who makes forward-thinking electronica as Solid Gold Luxury. Spectator chatted with the rising producer, fresh off a recent headline set at Saturday's WBAR fundraiser, WBANGERZ.

Noah Jackson: How did you get into music production?
Sean Delanty: In high school, my friend and I had an experimental electronic band, and he had really gotten into production, like on FruityLoops and then Ableton Live—­digital workstation, laptop-based stuff. He taught me the ropes. I was also experimenting with classical composition and writing some stuff for my high school orchestra. I gradually got more and more interested in experimental electronica.

NJ: Do you think your classical background influenced what you're currently making as Solid Gold Luxury?
SD: I think it definitely has an influence. It's something I'm trying to incorporate more and more. I'm studying music here, so I'm learning a lot of stuff about theory and history. When you just do stuff on the laptop it's easy to fall into cut and paste mediocrity. I'm trying to use my inspirations from the classical realm to take my stuff to a more interesting place.

NJ: Your music reminds me a lot of left-field electronic artists like Oneohtrix Point Never.
SD: He's my idol. As far as I'm concerned, he's a master of software-based production. His control of the computer to create these insane sound worlds is something that I find really inspiring, so even if my music doesn't really sound exactly like Oneohtrix, I'm aiming for the creativity that he brings to laptop-based production. The thing about Solid Gold Luxury is that there's this inherent disconnect or conflict, insofar as I'm drawing from Oneohtrix Point Never but I'm also remixing Miley Cyrus. I listen to pop music, I listen to hip-hop, and it's a huge part of my musical identity, so it would be impossible for that not to come through in what I'm making.

NJ: You've posted two sets on SoundCloud, one from last semester's Punk Poetry event and one from an off-campus show. How do you normally craft a 30-minute DJ set?
SD: Both of those have been all original material. Just this past weekend I played at [the WBAR fundraiser at] Vareli, and I didn't play any original material, so I guess it's about judging the vibe. Punk Poetry was an experimental sort of event, a lot of forward-thinking people reading cool poetry and showing their artwork off, so I figured that was the right environment to play my noisier, dronier stuff. I did drop a remix of Lorde and Miley Cyrus at that event, too. I guess it's about navigating the tension between wanting to just play a drone for 30 minutes and adding weird arpeggios on top of it and realizing that the crowd wants to move and dance. I like to dance and have fun, so I think it's cool if you're able to throw in some stuff that isn't completely cerebral.

NJ: With events like these, do you think that Columbia is a nurturing place for experimental musicians?
SD: I actually would not say so at present. It's not completely hostile toward experimental production. There are a lot of people here who are interested in listening to that stuff and making it themselves. This guy Michael Blair [CC '15] is working on starting this experimental art space in 501 Dodge, and I've been working with him. We're hoping that this becomes a semi-permanent space for art and experimental music on campus, because right now you have a lot of people really excited about that stuff, but there's not necessarily an established or well-known space for that to happen.

NJ: Apart from establishing that new project, what's on the horizon for Solid Gold Luxury?
SD: I haven't really released anything original as Solid Gold Luxury yet. In those sets that I posted on SoundCloud I was trying out ideas, working on stuff that I've been tweaking for a while and trying to figure out where I want to take the project. I wanted people to hear what I was doing but not have the expectation that it was my debut EP. I think very soon I will be putting something out that I am confident enough to call my debut release. Hopefully I'll have an EP or something a little more substantial soon.