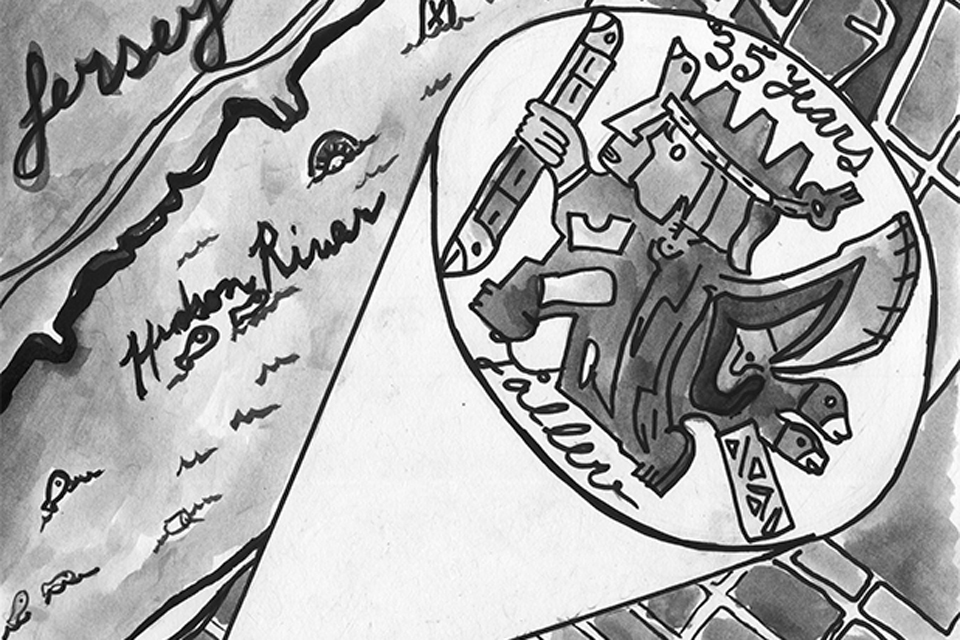 El Taller Latino Americanowhich means the Latin American workshop in Spanishis celebrating its 35th year while it scouts for a new location. Its being driven out of its current space by a rent hike.

Upper West Side cultural institution El Taller Latino Americano might be leaving its longtime location on 103rd Street and Broadway by the end of the year, but before it does, a celebration of the organization's 35 years will fill the art gallery and performance space with the sounds and sights of the people who have sustained it.

Starting March 1, El Taller will host 35 nights of music from various artists from New York and Latin America, including David Byrne and Argentinian musician León Gieco—two artists who have helped El Taller in the past.

Byrne and Gieco performed in 1990, when El Taller was trying to avoid leaving its space on the Lower East Side. They were joined by Pete Seeger, who died in January. Though Seeger is gone, Hudson Valley Sally—the band that will kick off the concert series—is one that "was formed to carry on the music, largely, of Pete Seeger," according to band member John Fisher.

"A big part of it is going to be Pete Seeger songs," Fisher said about the band's performance on Saturday. Joining Hudson Valley Sally on stage will be Sonia de los Santos, a Mexican singer, and Bernardo Palombo, Argentinian musician and founder of El Taller.

Palombo, who came to the U.S. in 1969, worked on "Sesame Street," composing bilingual songs for the characters. By 1979, he decided that he would start a center for musicians and other artists.

"We said, Let's open a space, one without bureaucracy, without the kind of waiting list to exhibit in SoHo,'" he said. "Let's open un taller'—taller' means place of work. We can really offer a space ... for whoever wants to come and show their stuff."

Over the years, besides the bigger names like Byrne and Seeger, the people who have come to show their stuff include Latin-American artists who have gained a wider American fan base after coming to New York at Palombo's behest.

"He's constantly bringing in new musicians from Latin America, who play first at Taller Latino Americano, and then become stars in their own right," David Sulzer, professor of clinical neurology, pharmacology, and psychiatry in Columbia's neurology department, said of Palombo.

Sulzer is better known in music communities as musician and composer Dave Soldier. He has known Palombo for a long time, and will also perform as part of the concert series.

Part of the impetus behind the 35th anniversary celebrations—besides celebrating the center's long history—is to continue to garner support for a petition that Palombo hopes to hand over to Mayor Bill de Blasio. The petition regards El Taller's impending departure from the place it has called home for 20 years, in the face of a $10,000 rent hike with the renewal of its lease in October.

Now, rising property values and a corresponding increase in rent are forcing El Taller out of the space that it has called home since 1990. According to the city's Department of Finance, the building at 2710 Broadway will have a market value of just over $3 million for the coming fiscal year—an increase of some $160,000 over the current fiscal year and an almost $1 million increase from the building's market value for the 2010-2011 fiscal year.

Despite the pattern of increased value, it still came as a surprise to Palombo when he was told last October that it would cost $18,000 per month for El Taller to renew its lease on the space—as opposed to the current rent of $7,500 per month.

Palombo said that the building's owner, Prana Investments, does very little with regard to the building's upkeep, and certainly not enough to merit a $10,500 rent hike. Representatives from Prana couldn't be reached for comment on this piece.

Back in the fall, El Taller started a petition on Change.org that currently has 1,432 signatures—one of which belongs to Manhattan Borough President Gale Brewer, GS 97, who was then president-elect of the borough and a city councilmember representing the Upper West Side.

For Palombo, the wider aim of the petition is to end a trend of rising rents that's doing away with institutions that he sees as vital to the community. He points to Bank Street Bookstore—which is planning to close after a 65 percent rent increase—as an example of another important community landmark that's being pushed out.

"At this point ... we are not the only one," Palombo said. "The whole city is being destroyed, and it's a silent thing because when you're kicked out, you don't talk anymore."

The 240 percent rent hike that the organization is facing would be steep for most businesses—but El Taller isn't most businesses. In addition to its two in-house recording studios, an art space (The Grady Alexis Gallery) that doubles as a performance space, and weekly salsa classes, the core of the organization is still its Spanish classes—the latter two being its only sources of income.

"The only money we get here is for classes. All the other parts that you see are losses," Palombo said. "We decided from the very beginning that music and art shouldn't be the business because then it's not music and art. ... There are people here that I hate—but they have the right to come and perform here. ... Anyone who wants to come and share creativity and dialogue is welcome."

The inclusivity of El Taller is clear from looking around the space. On the walls outside the main gallery are posters of people who have performed, like Argentinian folk artist Atahualpa Yupanqui and composer Philip Glass, who scored the film "Powaqqatsi."

In addition to the Spanish classes that are taught on-site at El Taller, the cultural center offers private lessons, summer camps, and casual conversation mixers. Outside the space, El Taller has also partnered with local elementary schools to help implement curricula that teach Spanish through art, including PS 513 Castle Bridge School in Washington Heights.

One of El Taller's Spanish teachers, Indiana Bervis, who is from Nicaragua and who owns Unoppressive Non-Imperialist Bargain Books in Greenwich Village, said that she met Palombo in her bookstore and he offered her a job.

She said that at El Taller, "you get a sense of a lot of continuity—it's almost like a big family in here."

"I had my store for 25 years," Bervis said. "And it's like this place in a way—it's very unique, and there aren't that many places like this anymore."

Indeed, for Palombo, he sees places like El Taller as a vanishing point for community to come together—but he rejects the idea that he had anything to do with forming one around El Taller. He draws his personal philosophy, at least in part, from the Gaia Principle.

"One of the things that it [the Gaia Principle] says is that there are not trees because it rains—it rains because there are trees," Palombo said. "Some groups like to say Well our group creates community'—that's bullshit. We don't create any community. The community created us."

Now, the community that created El Taller will try to help it stay, even as it scouts for a new location elsewhere.

It's fitting, then, that Hudson Valley Sally isn't named for a woman but for the verb—"a venture or excursion usually off the beaten track," according to Merriam-Webster.

"We move at least," Palombo said. "No inertia."