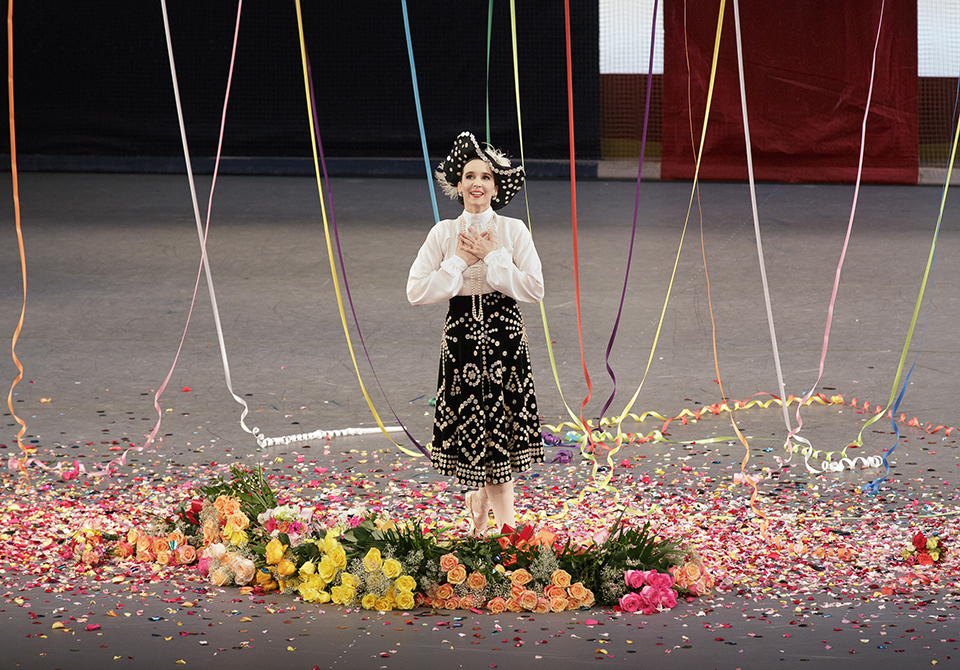 Acclaimed New York City Ballet principal dancer Jenifer Ringer took her final bow in February, ending a 24-year performing career that was filled with as many roadblocks as successes. As she details in her strikingly candid memoir, "Dancing Through It: My Journey in the Ballet," her struggles with anorexia and binge-eating eventually forced her to leave the company for a year. However, she eventually found her way back to health with the support of her church and her husband and fellow NYCB dancer James Fayette.

In 2010, a controversial "Nutcracker" review by New York Times critic Alastair Macaulay declared that Ringer "looked as if she'd eaten one sugarplum too many," sparking a national conversation about body standards in dance. During "Sugarplum-gate," as she refers to it in her memoir, Ringer—who by then had become a principal dancer, wife, and mother—was able to bounce back from the criticism and speak openly about the issues that had once nearly ruined her.

Ringer spoke to Spectator about her book, future plans, body image, and the role of media in today's dance world.

NADIA KHAYRALLAH: How does it feel to have just left the company? You've left before, but I imagine that this time must be a really different experience.

JENIFER RINGER: It was actually great. I had a great sense of joy that final day, and it was a great experience. The two ballets I chose to do were both ensemble pieces, and they were filled with all my friends. I was ready to stop, and so I feel great: a sense of satisfaction with my career and ready to move on.

NK: In your book, you mention how you felt that body image issues and emotional health were often overlooked during your own training period. Is that something you're trying to address?

JR: For sure. It will be very important to me to talk to dancers about where they get their identity from and making sure that their whole identity is not based in dance, that they need to have a core of self-worth that is not affected by the dance world and performance in the dance world. We can strive for excellence, but also remember that we're human, and that one of the greatest things about being an artist is exploring what it means to be human.

NK: Let's talk about "Sugarplum-gate," as you call it. Given the rise of social media and the number of voices being heard now, do you feel that the opinions of dance critics still have power over the public today?

JR: It's interesting because I think in a lot of ways, a dance critic—particularly one that writes for a major newspaper—does have a bigger voice that's definitely heard, but I think that voice has diminished because of bloggers and the Internet. Everybody is free to put their opinions out there, and everybody's opinions are much more accessible than they used to be. And that was what was amazing about Sugarplum-gate, that Alastair Macaulay wrote that article and had that opinion, but then in public there was a great outcry of a differing opinion that came out against him and against his opinions. So in a lot of ways, his voice ended up getting drowned out.

NK: In writing this book, you're also adding your own voice to that conversation. What was your thought process in making the decision to write and publish this book?

JR: I never actually wanted to write a book about myself and I've always been very resistant to it. But what really compelled me to write it was that I felt like what I had gone through in terms of body image and eating disorders was really common, and it's not limited to the dance world. In my journey to healing, I've met so many non-dancers who had the exact same problems I had, and I felt like my story could help people that struggled with the same issues.

I've been thinking a lot about the general problem of beauty and image in our culture, especially now with so much being fabricated. I have a young daughter, and I thought a lot about how I want to emphasize her self-esteem, how I want her to feel beautiful, and what I want her to base her idea of beauty on. I've thought about the patterns I want to set up for my daughter. I'm not going to say, "Oh, Mommy doesn't wear that because it makes her look fat." I'm not going to set up that pattern with her because if I set that up, then she becomes aware. I'd rather say, "I like this shirt because I feel pretty in it." I can choose to set up a different pattern for my daughter where the value is not placed on people's appearances, but people's actions.

NK: What changes would you like to see in the dance world in coming years?

JR: I would like there to be more written appreciation for the different body types that are out there. The fact is, there is a ballet stereotype, a ballet body type that is there, and people are kind of expected to fit into that mold. But the reality is that there are so many different body types out there. There are healthy, fit, amazingly athletic women out there who are incredible dancers and artists across all the body types. I would like there to be more acknowledgement of that, so that the stereotype doesn't get perpetuated.