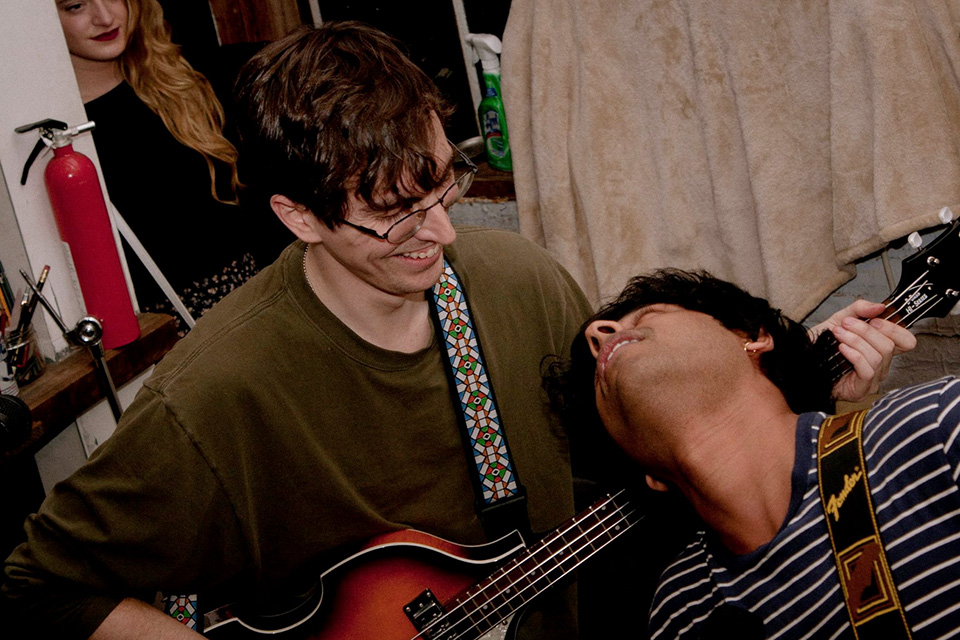 Members of Dances, a band that recently released its first EP.

David Su, CC '14 and drummer for Dances, needed to think about what the name of  his band's new EP, "Whiter Sands," means to him. After a pause, he said the name draws on the idea of relief through contrast—an idea that translates extremely well to its overall sound. Despite its brevity—the EP is only four tracks long—there is a sweetness to each song's melody that crests into some surprisingly edgy psych-rock guitar hooks. Dances, which consists of Trevor Vaz, CC '11, Sam Stoeltje, and Su, released "Whiter Sands" on iTunes and cassette last week. Spectator talked to Su about his background and the band's experience recording.

David Su: I started off with piano lessons. I was into it, but I really didn't like practicing, which was really stupid. When I was in fifth grade, I had a music teacher who'd previously studied in South Africa, and he showed us all this percussion stuff, and I found it really fascinating. It came more naturally to me than what I'd been doing on piano. This is also around the time I started listening to rock music. I think the first song I ever learned was "Feeling This" by Blink-182. Throughout high school, I got into classical rock, prog rock, and some film scoring stuff. And jazz was a huge influence—it was probably one of my biggest in college. Through the Columbia jazz program and WKCR, I got exposed to so much—in the same way that I got exposed to so much rock music by being in New York.

NS: How did you find the music scene at Columbia?

DS: It was definitely very, very intimidating at first. The first class I took here was a jazz class that was part theory, part history, and part improvisation, so everyone brought their instruments, and they were all just doing their thing, and I was just this little kid from China. I've played Varsity Show every year except this year. It was a nice experience for me to be able to engage with that kind of music. As time went on, I realized that people were very inclusive—musicians are always just down to play with anyone else, and that's always a cool culture. Columbia's full of so many musical opportunities. I definitely didn't expect myself to get pulled in these directions.

NS: Could you tell me more about the production process behind "Whiter Sands"?

DS: We recorded the EP before we got signed to Black Bell [Records]. We recorded it at Strange Weather [Recording Studios] with Daniel Schlett, who produced with DIIV—he's done a bunch of other stuff, too. That was just a great experience. He's so full of energy and sensitivity to whatever music you're trying to make, and he knows all sorts of music. It was just a really fun time—I mean, obviously we were there to record, but it didn't feel like a session.

NS: With the EP out, do you have any long-term goals for Dances?

DS: I guess that's the closest-term plan: We're going to record an LP—this time with the label's backing, and then hopefully go [back] on tour. And also, we just wanted to explore. Only now have we solidified a sound, and already it's changing, so I think part of the excitement is trying to see what's next, because we don't know—the kinds of songs we're going to make, the kinds of performances we're going to put on. Just exploring the dynamic and growth of the group.