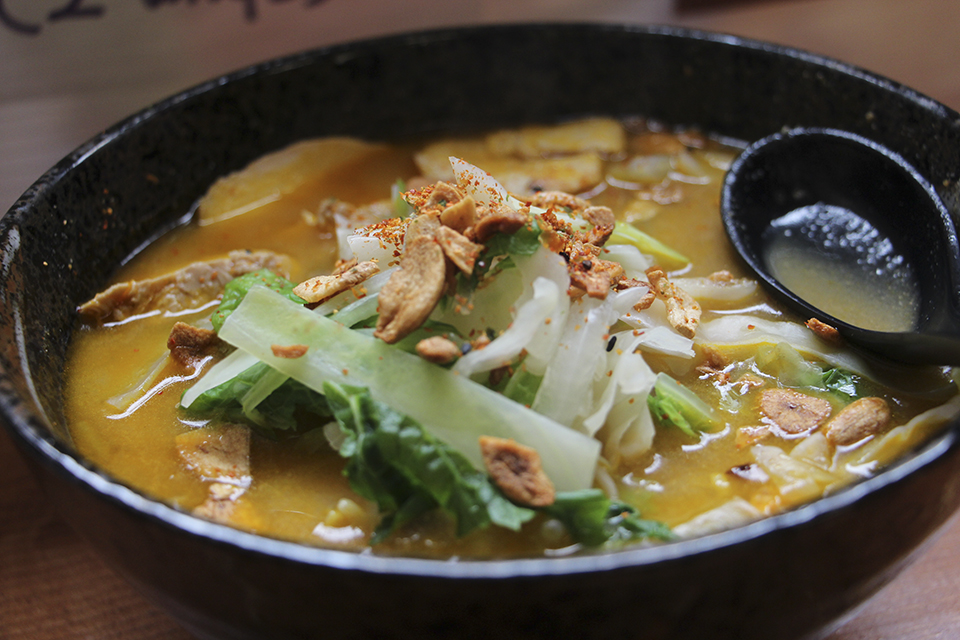 The soups at Cho-Ko in the East Village arent worth the lengthy trip when Jin Ramen is so nearby.

By no means is the East Village short on restaurants that serve ramen—especially with giants like Momofuku Noodle Bar and Ippudo NY in the vicinity—but Cho-Ko, a new joint on First Avenue, boasts a cheaper and more intimate setting than its peers, with decent food and amenities to boot.

The restaurant bills itself as providing traditional Japanese ramen, though there are a few Chinese influences and dishes that supplement the menu. Cho-Ko's chef has a decade of experience working in other ramen stores in New York and Japan itself, so if authenticity is the goal, Cho-Ko has that covered.

In terms of size, Cho-Ko is the epitome of the New York hole-in-the-wall restaurant. The place is shockingly small, probably only capable of seating 15 comfortably and 20 at full capacity. Through its size, Cho-Ko creates an intimate environment by forcing patrons to remain in extremely close quarters with each other.

Its small size was probably the reason the restaurant kept its decorations modest. The walls are paneled wood, and a few kitschy items stand out: a lucky cat by the register and a string of pastel pink and baby blue birds adorning a small wooden overhang that resembles a traditional Japanese roof.

Although my dining partner and I only asked for appetizers and entrées, oolong tea was provided on the house to celebrate Cho-Ko's grand opening.

Fortunately, the appetizers came out quickly, which was good news because at this point, I was starving. Luckily, I was not disappointed. I split the teriyaki chicken with a friend, and by the end of that and the tea, I was already pretty full.

The teriyaki chicken was served on a bed of fresh, crispy lettuce, which was refreshingly cool against the heaviness of the teriyaki sauce. The chicken itself was tender, served in small chunks that made it much easier to grasp with chopsticks. The last time I had teriyaki chicken as a stand-alone dish was a while ago—I'm glad Cho-Ko's chicken exceeded my expectations.

When the main course came out, I was expectant. It was pouring outside and I was yearning for a simple bowl of ramen after the 40-minute commute down to the East Village.

Since I was actually craving a bowl of Totto Ramen's chicken paitan ramen with extra spicy garlic sauce, the miso ramen soup I received was slightly underwhelming, though it is still unclear whether that's the result of my high expectations or the quality of the food itself.

The noodles themselves were pretty standard: They were cooked well, but the dish could have been served warmer. There were a number of vegetables, from onions to cabbage, but the sprouts and scallions stood out the most—they were buoyant in the soup and easy to fish out. Most of the vegetables were also crunchy, which was an excellent change in texture from the slipperiness of the noodles.

Speaking of crunchiness, there was one element that seemed totally out of place in the soup: a number of pieces of deep-fried, brittle garlic were thrown into the dish. At first, I was so thrown by this addition of garlic that I thought they were nuts, and I asked my friend to confirm what this mysterious ingredient was before I ate any more. The hard pieces of garlic were a miss for me.

Although the broth was a bit watery, I was much more upset by the fact that the ramen was not nearly as spicy as I'd hoped—there are only so many spicy condiments that you can add to something before doing so just becomes a waste of time.

Ultimately, I left Cho-Ko feeling full, but I was still in want of that bowl of Totto's ramen.

If you're already in the Village and looking for a cheap eat, it's worth it to hit up this place. If someone is treating you to dinner, though, look elsewhere for your ramen fix because this is very much a weekday meal. If you're not already in the area, it's not worth making the 40-minute trek from Morningside Heights, especially since Jin Ramen is a stone's throw from campus and has slightly better quality food for similar prices.

Cho-Ko is located at 59 First Ave., at East Fourth Street.