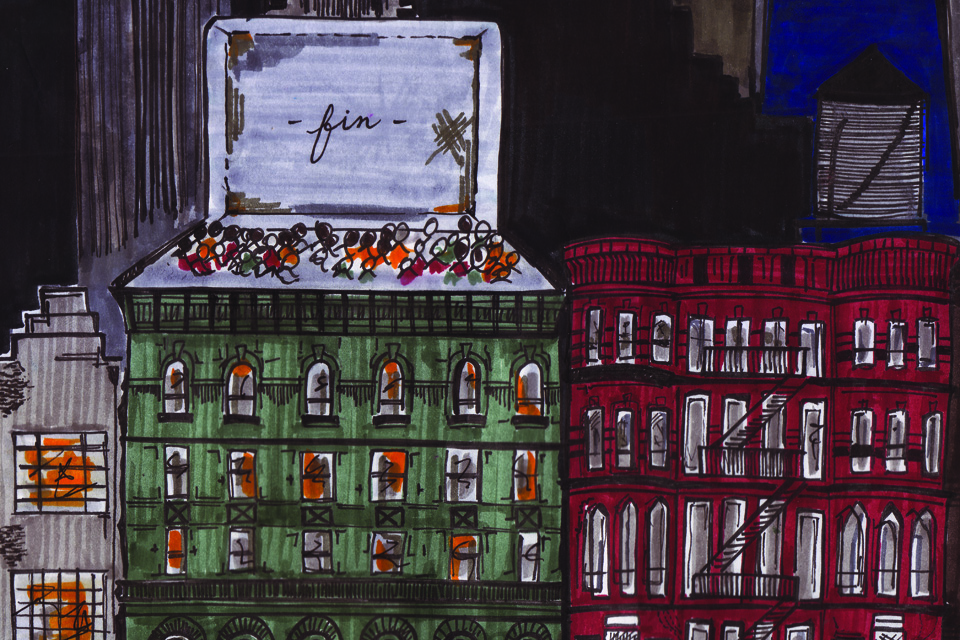 This summer, the 18th annual Rooftop Films Summer Series will light up rooftops all over New York City. Every weekend for three months, the Rooftop team builds a theater on top of a building, only to take it apart the next day. For one night, each venue is transformed into a communal space that celebrates independent film and New York City culture.

Rooftop Films is a nonprofit organization dedicated to exhibiting independent and avant-garde cinema. In 1997, filmmaker and Rooftop founder Mark Rosenberg, who was struggling to find audiences for independent short films, set up an informal screening on the roof of his East Village apartment building. Rosenberg set up a projector and a white sheet and invited his friends to come out and share their films. Rosenberg was evicted from his apartment when word of the screening got to his landlord, so the following summer, he organized another screening with the help of fellow Vassar alumnus Dan Nuxoll, this time on top of an old warehouse in Bushwick.

"We had a 21,000-square-foot roof and started doing screenings. Originally just one screening a year, then we moved up to four, and eight," Nuxoll said. "It was a way of showing new, independent films that we thought were great, but didn't have many means to reach an audience. This was in the pre-YouTube era, so you couldn't even show films online."

Slowly, a community of artists began to form as the word spread of the burgeoning underground festival. In 2003, Rooftop Films registered as a nonprofit with a full-time, year-round staff, and Nuxoll as program director.

For this year's summer series, beginning May 16, Rooftop Films received more than 3,000 submissions. The organization will put on a total of 46 independent screenings, featuring more than 100 feature films and short films. Some spring from the New York film community, while others were produced internationally, in countries including Australia, Serbia, New Zealand, China, and Argentina.

Rooftop aims to maintain a balance between showing films with larger production and distribution budgets and giving attention to new, smaller filmmakers whose work will have less exposure at other film festivals or in theaters.

"Many of the films will open in theaters after we show them, and that's fantastic, but that's something we take into account. We don't want to do 32 films that are all going to be independent hits that have big theatrical releases," Nuxoll said.

The line between films produced through the conventional Hollywood studio system and those that are independently financed has blurred in recent years. When David O. Russell's "Silver Linings Playbook" won four Independent Spirit Awards, the event sparked controversy because while technically an independent film, its budget and distribution far outstripped those of other nominated films. However, Rooftop is not very concerned with these distinctions and does show films that have their own distribution and backing.

"Primarily, the loose definition of 'independent film,' and the one we stick to, is films that are produced outside the studio system. What the studio system means can vary from one person to another," Nuxoll said. "Most of the films we show are very rarely produced for more than a few million dollars at the very most, and often considerably less than that."

For many, the independent film community is a space for stronger and more experimental forms of artistic expression. Cinematographer and Columbia alumnus Chris Teague, SoA '06, was involved with two of the films that will be shown in the upcoming Rooftop Summer Series: "Obvious Child," directed by Gillian Robespierre, and "Appropriate Behavior," directed by Desiree Akhavan.

"In independent film, there are more unique perspectives, particularly with first-time filmmakers who have a new perspective of the world that they want to share. I like challenging storytelling, which is what I learned at Columbia," Teague said.

In addition to celebrating the best of independent film, Rooftop's screenings often incorporate other forms of entertainment. In order to make the events memorable and lively, every screening in the summer series is preceded by live music and followed by a party.

"One of the things we focus on in terms of our curatorial mission is not just looking at the film as it stands by itself, but also how the film can be part of a meaningful event," Nuxoll said.

Among Rooftop's upcoming films is "Mateo," a documentary directed by Aaron Naar. The story follows singer-songwriter and ex-convict Mateo as he busks in the streets, singing romantic Latin pop songs and trying to get a record out in the Cuban music industry.

"As soon as I saw that, I said, 'If we can get him to perform and maybe serenade the audience after the screening, that would be an event that would take it to a whole new level,'" Nuxoll said. "That's really a big focus of what we do, is making the full experience something that's special."

Nuxoll added that the idea of using rooftops as venues is also a rich source of curatorial creativity. Each year, Rooftop adds new venues in districts all over the city and looks to pair physical space with content whenever they can. One of the new venues this year is Brooklyn Grange's Navy Yard Farm, a 65,000-square-foot rooftop farm situated 12 stories above an old naval shipyard. Rooftop plans to screen two films at this venue: "The Disobedient," a film directed by Mina ?ukic about a road trip through rural Serbia, and "The Last Season," Sara Dosa's documentary on mushroom hunters in Oregon.

Rooftop Films has a strong community ethic that provides follow-up support to filmmakers who have previously worked with the organization. Recognizing the tremendous costs that often go into making a successful film, one dollar from every $13 ticket sold by Rooftop goes toward its Filmmakers' Fund. The fund is geared toward furthering the successes of those filmmakers whose work has aready gained exposure at Rooftop—as long as a filmmaker's work has been shown by the organization before, he or she is eligible to apply. In 2013, $73,000 was distributed overall through the Filmmakers' Fund grant. Seven grants are available this year.

One filmmaker who has benefited from this fund is Benh Zeitlin. Zeitlin's first film, a short titled "Egg," was created as his senior film project at Wesleyan University and screened by Rooftop in 2005. Zeitlin went on to create two more films with the help of grants from Rooftop Films, his most recent being "Beasts of the Southern Wild," which was nominated for four Academy Awards.

Genevieve DeLaurier, managing director for Rooftop Films, said that Rooftop is instrumental in creating "a community of filmmakers, a community in New York City."

Clara Roquet, SoA '16, is one filmmaker who knows about the differences between the filmmaking communities on the East and West coasts. Roquet helped write the film "10,000KM," a romantic drama about a couple struggling to maintain a long-distance relationship that is screening as part of Rooftop's summer series, which she completed in her home country of Spain before coming to Columbia.

"I was in Los Angeles two months ago because of the film, and I didn't connect with that at all. I feel like New York is a more independent, art house-based community. It's an amazing place to discover new filmmakers and new films," Roquet said.

Along with Rooftop's focus on community comes a commitment to making arts more accessible.

"Our ticket prices are very low—they're only $13," DeLaurier said. "We do that on purpose because we believe that the arts should be available to everyone. If we were just in it for the money, we could charge 30, 40 dollars. We want to create a really unique experience with live music, spectacular locations, films, parties afterwards. That's a lot that you get for 13 bucks."

These added elements are part of what Rooftop sees as its wider effort to contribute to New York City as a whole. What sets Rooftop apart from other film festivals is its willingness to embrace and draw in a younger audience, one that is interested in culture but not necessarily on the level of a cinephile. A crucial part of Rooftop Films' mission is its efforts to appeal to a wider, popular culture and bring independent films to everybody.

"Every one of our events is a social event," Nuxoll said. "In nearly two decades of doing this, the social aspect is one of the most important things we've added to this city as a whole."