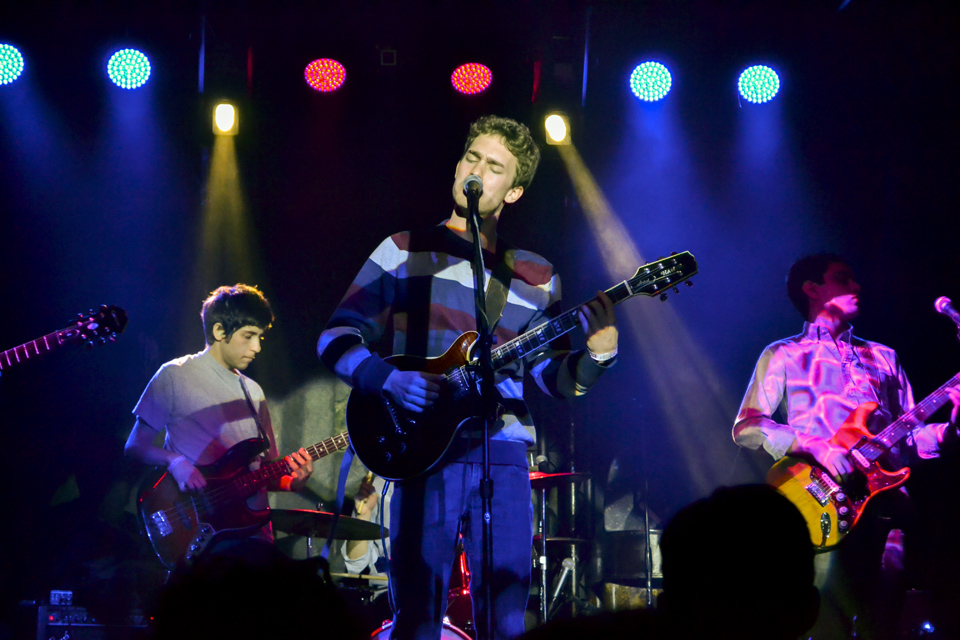 A growing presence on campus and in the city, Phonoscenes released an EP this semester.

In certain circles, "progressive" is a dirty word when it comes to music, bringing to mind the excesses of '70s Hobbit rock or Armin van Buuren's never-ending trance mixes rather than anything forward-thinking. "Progressive" is the only way this year in new music at Columbia can be described. Almost every facet of the Columbia scene has progressed in some way, from established artists hitting new levels of fame and creativity to the incredibly diverse output from new musicians in the freshman class and beyond.

Whatever the genre, experimentation has been a defining feature of this year's output. While previous alt-orthodoxies may have blanched at including Miley Cyrus in a DJ set or flipping Beyoncé tracks into menacing club bangers, artists such as Solid Gold Luxury (Sean Delanty, CC '16) and Won Ton Death (Jake Gagne, CC '16) have no fear blurring chart hits with futuristic instrumentation.

"I listen to pop music, I listen to hip-hop, and it's a huge part of my musical identity, so it would be impossible for that not to come through in what I'm making," Delanty told Spectator earlier in the year.

His cerebral mix of drones, percussive bass, and the occasional "Wrecking Ball" brings to mind Oneohtrix Point Never, while Gagne oscillates between electronic sound sketches and a savagely queer take on Pavement-style '90s indie rock. The class of 2017 has also brought in new blood, with Isaac Sleator and Clement Gelly, both CC '17, producing down-tempo hip-hop beats as if Dilla never died.

"Dorm rooms can be excellent places to put together entire albums if you have the right equipment," Sleator said in March.

Columbia artists haven't just been pushing sonic boundaries—they've also been pushing spatial ones. It's no secret that there aren't enough practice or performance spaces accessible to students, particularly for those not studying music. This year saw Columbia musicians attempt to retake campus, using unconventional spaces to bring their art to the masses.

In February, a contingent of radio kids and campus musicians launched Hi-Fi Snock Uptown, a new monthly music and arts showcase. Their distinct combination of bands, banter, and vegan stew somehow turned 501 Dodge into the next 285 Kent. Even more unexpectedly, the John Jay laundry room somehow became Columbia's hottest rave location after the #Hypemerchants DJ collective, led by Teo Leibowitz, CC '17 and a Spectator deputy editorial page editor, took it over in March.

"Expect many hypes in the near future," Leibowitz said after the event.

While the influence of EDM still remains strong on campus, what made this year so different when it came to campus dance music was the unprecedented volume of original content. Flaxo (Nick Perloff, CC '16) released his first original vocal track featuring the dulcet tones of NYU songstress Sophie Strauss, Vonzie (Sean Von Ohlen, CC '14) put out a collaboration with Midwestern trap stars Goon Bags, and DJ Dwai (Andrew Jorquera, SEAS '16) produced a low-key banger with Miami beat-maker ManBearPimp. Live performances were also more frequent—Dwai popped up everywhere from the CU Dance Marathon to the Columbia Music Festival, while Flaxo supported The Chainsmokers and Lupe Fiasco at Bacchanal.

While this year has seen a coterie of exciting new artists, the Columbia establishment has also been turning it out. Resident R&B queen Taylor Simone, CC '14, released her soulful debut album, "Songs from the Front Yard," in October, and if that wasn't evidence enough, her video for "Greedy" and her performance at Bacchanal with Josh Mac, CC '14, as California Love solidly cemented her as one to watch after graduation. Sun Looks Down and Phonoscenes repped the alternative rock scene with live performances in New York's trendiest venues, while recording outstanding EPs released in January and March, respectively. But this year's biggest coup was for our favorite folksters, Morningsiders. Not only did the folk-pop four piece headline the Bitter End's CMJ Showcase, but during reading week they also revealed that their breakout hit "Empress" would soundtrack a Mother's Day ad for Starbucks featuring Oprah.

All in all, this year has been truly exemplary for new music at Columbia. All we can hope for next year is more growth, more experimentation, and a Bacchanal headliner who focuses more on wowing the crowd than on peace in the Middle East.