Bastards of Strindberg' a fitting tribute to Swedish playwright

Bastards of Strindberg' a fitting tribute to Swedish playwright 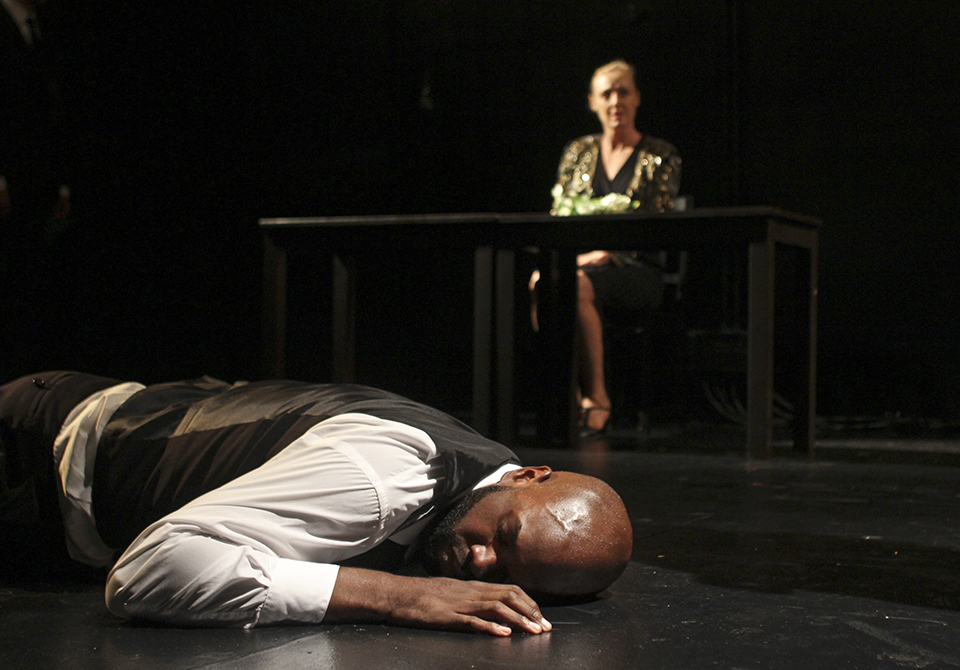 "Bastards of Strindberg" seeks to lend familiarity to a perhaps distant world, while also exposing our distance from many things that should be familiar. In so doing, it explores themes of sexuality, gender politics, and class conflict, as well as more theoretical issues of intertextuality and drama.

The work is a collection of four short plays by different authors, produced by the Scandinavian American Theater Company in honor of Swedish playwright August Strindberg. It is directed by Henning Hegland and Alicia Dhyana House, both graduates of Columbia's MFA program in directing. As the title suggests, the plays expand on, or offer alternative possibilities for, Strindberg's "Miss Julie." The plays are, for the most part, fairly abstract, bridged by expressive dance sections. The ensemble cast is always onstage, at turns impassive, engaged, and asleep. They frequently break character, and sometimes the fourth wall.

The authors take different approaches to adapting Strindberg's work for a contemporary setting, and these approaches are sometimes conflicting. In some ways, they have tried to modernize "Miss Julie." Strindberg's Christine becomes Kristin. Language is recognizably contemporary, as are the costumes, props, and set (what there is of it). Concrete references, perhaps necessarily, rear their heads, for instance in the form of references to the 99 percent, popularized by the Occupy movement.

Yet in other ways, the play aims at a sense of timelessness, enhanced by elegant direction. The understated black and white costumes indicate no specificity. The dance choreography combines modernist and primitive elements, while haunting vocals and violin are interspersed with electronic effects.

The directors capitalize on the play's abstract elements to try to bridge the disparate texts of the four short plays. Though they make a valiant effort, there are nevertheless significant differences between the plays in both tone and in substance.

The first play in the series, "Chanting Hymns to Fruitless Moons" by American playwright David Bar Katz, takes a critical approach to "Miss Julie," featuring an older Julie lecturing the audience on some of the play's problems. This overly dispassionate framing undermines what should be first playful and then emotionally powerful.

A similar issue occurs in "Midsummer at Tyrolen" by Swedish playwright Lina Ekdahl, in which the author's decision to have the actors jump repeatedly in and out of character diminishes the play's emotional resonance.

In both these plays, the script sometimes fails its female actors. Though Vanessa Johansson and Rikke Lylloff play the seductress delightfully, they deserve more to work with.

The third entry, "High Powered" by American playwright Dominique Morisseau, departs markedly from its fellows in eschewing the plot of "Miss Julie"—an inspired decision. Perhaps coincidentally, "High Powered" is also the only play that shares no cast members with another.

Of the four, it focuses most explicitly on political themes, though certainly not to the exclusion of a plot that is deeply emotionally compelling. The entire cast of "Bastards of Strindberg" gives a strong performance, but "High Powered" gives its actors the best material to work with, and Zenzele Cooper and Kwasi Osei take full advantage of it. Cooper, in particular, gives a superb performance.

Johansson contributes an earnest conclusion in Swedish playwright Andreas Boonstra's "The Truth about Fröken Julie," the final play of the four, while Lylloff gives an excellent comic performance. At the end of the play, Boonstra has his actors break character to offer some theoretical thoughts about the theater. Yet they are now simply playing actors. Ironically, in undermining the hitherto pleasant playfulness of the scene, the breaking of character belies the playwright's words.

Through its captivating dance sequences and its strong ensemble cast, "Bastards of Strindberg" rises to the challenge of establishing cohesion between its disparate components. Yet nowhere else does it match the intensity of the aptly titled "High Powered."

"Bastards of Strindberg" runs through Sept. 21 at The Lion Theatre. Tickets start at $45.